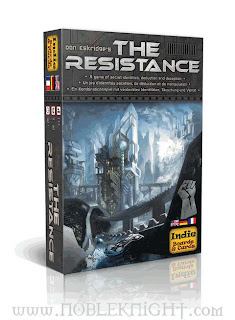 I know a lot of people really like the Battlestar Galactica board game, and they should, because it is really fun. It's a cooperative game where you're trying to save the human race, unless you're one of those traitorous Cylons who look just like human beings and are trying to kill off the remaining meat puppets. Those pesky traitors make the whole game into a maddening and exhilarating exercise in paranoia, wild conjecture, and unbased accusation.

The idea behind The Resistance is simple and familiar. You play a cadre of upstart insurgents attempting to topple a corrupt government - but that government has infiltrated your team and inserted spies in your ranks. It is the singular goal of these spies to ruin the plans of the rest of the team by sabotaging their missions and sowing disharmony among the loyal.

That's all the background you need for a super-concentrated blast of finger-pointing and lies. If the spies can make the resistance members fail three missions, they win. If the resistance can successfully complete three missions, they win. But it only takes one bad apple to ruin a mission, which means that any time you've got spies on the job, they can ruin the day.

You'll get your identity in secret, and only you will know whether you are loyal - unless you're a spy, and then you also know who the other spies are. You'll vote on teams to send on missions, and wild accusations will fly with no more support than a difficulty maintaining eye contact, or voice inflection, or bad breath (in all fairness, I had onions for lunch, which does not necessarily make me a liar). When the cards are flipped and you find out that one of the team was a spy, you'll all start yelling like the Republican National Convention hopped up on chocolate, coffee and crack cocaine.

The result of all this paranoia is fifteen minutes of pure, unadulterated fun. Addictive fun. The kind of fun that, as soon as you finish the game, half the people at the table will say, 'hot summer crap, that was fun! Let's do it again!' and the other half of the people will agree. We played three games in a row, just because we couldn't bring ourselves to stop. This is all the parts of Battlestar Galactica that you love, boiled down into a quarter-hour of over-the-top madness and deceit.

In fact, I find it fascinating that people (including myself) are so drawn to games that are all about lying. In a society that purports to embrace honesty and integrity, we do so love the chance to prove how good we are at deliberate deceit. Perhaps it's that games like The Resistance give us the opportunity to really indulge our darker sides, embrace lies and dishonor and deceit in a socially acceptable atmosphere where the best players are the ones with the slickest patter and the most convincingly dishonest demeanors.

I have heard several people who say that The Resistance makes them want to play Battlestar Galactica. Me, I'm the exact opposite. Hearing people talk about Battlestar Galactica makes me want to play The Resistance. This is a game that compiles every awesome part of Battlestar Galactica and purges every single thing you don't need. The missions are not defined beyond being a mission. There are no sliding measures of success, no eventual descent into madness, no backstory or plastic spaceship or cardboard counters. There's just you and a bunch of your friends, lying your ass off and doing everything you can to create distrust and enmity before your fifteen minutes come to an end and you all go off to be normal, functioning humans once again.

I'll close with this. If you have at least four other people who will play this game with you, get The Resistance. If I could issue orders like an army general, I would send you all out to pick up a copy tonight. When I play a game one night, and spend the next 24 hours talking about how much I want to play again, it gets my absolute highest recommendation with absolutely no hesitation whatsoever. If you like fun, you need to buy a copy of The Resistance. If you don't like fun, go read a blog about bird-watching or insect reproduction.

Pros:
Concentrated blast of deceit and paranoia
The confusion and wobbly logic will make your head hurt, but in a good way
Sweet holy mother of pearl, this is a fun game

Cons:
Theme removed to get to the good parts
Over in 15 minutes, when I want it to last for days

You owe it to yourself to own a copy of The Resistance. You can save some green and get flat $10 of shipping from Noble Knight Games. Tell 'em I sent you.
WEB OF LIES
Posted by Matt Drake at 10:14 AM

I bought this game and was hoping to pull it out for our game day yesterday, but didn't have enough people show up, and now this review makes me even more upset at those couple people who didn't show up! Must play this soon!

Notice something? Matts favorite games comes without a body count and contains neither boobs not hookers ;-)

This game is seriously the Biznizz.

It is a 'filler game' that I want to be the main event at a game gathering.

But I restrain myself to just one play per session. I do this because I salivate until the next time I play and the next time will be ever so sweet.

I agree with may that one of the only drawbacks is that it was not able to apply the BSG theme to the game. It would have been an even bigger commercial sensation.

But thats why there is PnP... and artscow. I own the game so I feel righteous in using 'Shop to make my own BSG retheme.