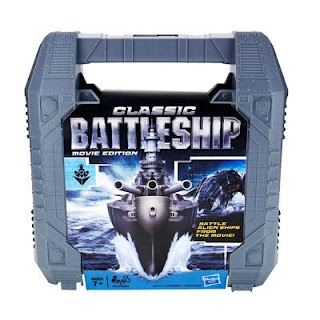 I have almost no gaming nostalgia. I liked Candyland when I was a tyke, but I don't want to play it now. I enjoyed playing Blitzkrieg with my old man when I was in junior high, and would not like to reenact the experience today. I used to love jumping in mud puddles when I was a youngster… OK, bad example, I totally love jumping in mud puddles. Only now I can't do it, because I'll just ruin a pair of khakis and a nice oxford.

So when I got the updated Classic Battleship - the one that goes with the movie - I was disheartened. It was sent to me so that I would write about it, and I can't write about it if I don't play it, and that means I had to play it. But I dislike Battleship. I mean, I would rather mow the lawn or stain the fence than play Battleship. I really, really don't like that game.

I do have to admit, though, the pieces in the movie version are kind of cool. The game box doubles as a two-part board (so each player can use half of it) and there's a nifty sliding tray to hold the pieces. One player has the invading aliens, and the other has human ships (including some from Japan and other occasionally useful places). And in addition to white pegs and red pegs and really cool art, there's also a deck of cards in each storage tray.

This confused and intrigued me, because Battleship isn't supposed to have cards, and yet maybe they could redeem it and make it fun. Each player has cards, and on your turn, you can play two cards, draw one and play one, or draw two. This creates some actual strategy! Admittedly, not a whole lot, but there's more than was there before. The cards tell you how many times you can shoot, and some do nifty stuff like blow up a whole row or make your opponent reveal one place on the board that is a hit. There are special ability cards and game-breaker cards and one that makes any hit sink the wounded ship instantly.

And I have to say, after playing the game with the cards, they do actually add a lot to it. What used to be the world's most tediously random nightmare is now downright palatable. I'm not saying it's wildly entertaining, or anything, but there is just enough here to give you something you can call a game.

Unfortunately, the cards are really not enough to make me want to play Battleship again. For one thing, the com towers don't do anything until you collect four of them, and then your opponent is just screwed. If his shuffle was worse than your shuffle, you win and he loses. That sucks, and we house-ruled that after one game.

Plus the cards still don't offer any real depth. Sure, there's a modicum of hand management, and a trade-off of attacking now versus mowing through your deck quickly, but it's still not exactly rocket science. I do have to admit, however, that my daughter actually wanted to play twice. Not three times - I dodged that bullet - but at least she wasn't complaining about how her father abuses her by making her play crappy board games.

I guess Battleship has always seemed more like a toy than a game to me. It has all these cool plastic ships and cool colored pegs and a cool plastic board with holes in it, but when it comes down to it, it's actually just a boring, crappy, random game. Adding cards makes it better - I would go so far as to say a lot better - but that's not saying much. It's like saying stepping on Legos in the middle of the night is better than stepping on barbed wire. Even a dramatic improvement still leaves you hopping around on one foot and cursing like a dockworker.

My nostalgia factor for Battleship has not changed any. I still don't like it. However, I can admit that if you've got a kid who wants to play the original, the movie version might make it so that your game time with him is tolerable. Plus the cards speed up the game dramatically, and whenever you can manage to make unpleasant things end faster, that's a net gain. Unless it just means you have to play twice.

Pros:
Faster than the original
A small but detectable amount of strategy

The one thing to watch for, if you decide to pick up the movie version of Battleship, is that there are actually two version - classic and deluxe. This review was the classic one. They didn't send me the deluxe edition, and I'm not enough of a masochist to ask for it. You can probably get it from Hasbro or Toys-R-Us.
Posted by Matt Drake at 8:14 PM