Story Game Review - A Penny For My Thoughts 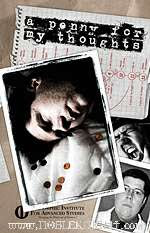 I played an incredibly weird game this weekend. It was really cool, but man, was it a trip. It was called Kick the Can, and I think it was just invented by kids who couldn't afford a soccer ball, so they played with garbage.

I also played A Penny For My Thoughts, which is also weird and cool. But unlike Kick the Can, there's virtually no physical activity of any kind. This makes it perfect for fat people and those unfortunates who have been stapled to their living room furniture. You won't burn off Easter dinner played this game, but your brain will feel like it just got done running a 5K.

To play A Penny For My Thoughts, everyone has to start off by pretending that they are amnesiacs. Every player is undergoing treatment for this memory loss, and trying to remember what happened to erase the past. So you take this trippy drug that makes it so that you can see into the other patients' memories, and just pull out little snippets that can help them reassemble their broken histories.

That's the backstory, but it's not really the game. The game is all about improvisational, cooperative storytelling. The pretend therapy session is just there to provide some kind of framework around which to build your stories, and to present some rules that you can use to weave a wild yarn with the help of two or three of your closest friends.

Of all the cooperative storytelling games I've played recently, A Penny For My Thoughts is easily the most intense. It deals with real-world situations, emotions and senses, and can get real mature, real fast. Because other players are there to prompt you with details and choices, you can quickly get the feeling that you have only the vaguest hint of control over your story, and if you're not willing to get really into the game and seriously play along, it's going to make you cranky before you're done.

A few choice rules make this seat-of-the-pants storytelling particularly tricky. You'll start off every segment of your tale with some tidbit, like crunching leaves or rain on your neck or a shattered lightbulb. Then people you thought were your friends will ask you yes-no questions - but you have to answer yes. So when the guy goes, 'Was your friend also gay?', then guess what, you're gay. Some other lovely questions that came out of our game (to which the queried player was forced to agree) included the death of loved ones, painful wounds, and insanity. I should probably count my lucky stars that I wasn't asked if I was a paraplegic.

Taking these amusing details and creating a story is just the first part, too. Because every time you get to a place where your character would do something important, you get two possible options, which come from the same people who told you that you were an incontinent homosexual who had killed his grandmother. When your dialog options are either, 'Actually, Bob, I did kill your dog,' and 'Sorry, Bob, I sold all your stuff on eBay,' it poses an interesting dilemma.

We did manage to create some very intriguing stories, including a twisted murder mystery and a miracle cure for cancer that was only available in Switzerland. However, the process was, at times, rather painful. Not the stories themselves, exactly, but the procedure itself. Because the single most important thing you need to play A Penny For My Thoughts is a roomful of people who are in total sync with how to play, and we didn't really have that.

One of us wanted to drive the stories for the others, and kept pushing extra material into the details. Another wanted to be silly, and at one point, had a character jumping out of a cab screaming about the rapture. Another was just plain irritable, and kept yelling at everyone else and correcting even minor mistakes. Accept my guidance on this point, and don't play A Penny For My Thoughts with your family. Seriously. Don't do it.

On the other hand, if you have some friends you really trust to follow the rules and spirit of the game, A Penny For My Thoughts is a delightful way to kill an afternoon. The spontaneous and unpredictable tales that are created when a group of people take turns driving can range from heartwarming to downright thrilling, especially when you truly never know if your character is going to get the girl or wind up on death row.

I enjoyed A Penny For My Thoughts, and if you're able to find some people who can truly dedicate themselves to making it work, you might, too. It's not easy to play, and will challenge your imagination and cooperation beyond what you thought was feasible, but you'll find yourself creating great stories and exploring possibilities outside what you could ever consider on your own. Depending on how much you like telling stories, you might also have a hell of a lot of fun.

(Incidentally, I did not actually play Kick the Can. That was a lie. I own a soccer ball, and do not need to play with garbage.)

Pros:
The deepest cooperative storytelling game I've tried so far
Lets you create some of truly fascinating tales
Straightforward rules that let you start playing without having to read the whole thing

Cons:
Absolutely, emphatically requires you to be in sync with the other players
No sanitation on these stories mean you could see some serious darkness

If you've got the imagination and mental stamina to play a cooperative storytelling game this intense, you'll be hard-pressed to find one more enjoyable than A Penny For My Thoughts. You can get it from Noble Knight Games, right here:
SAVE MORE THAN A FEW PENNIES
Posted by Matt Drake at 2:08 PM