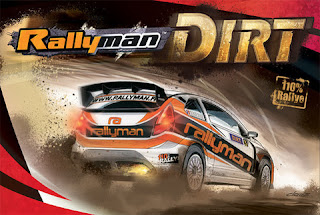 Last week, I reviewed Rallyman, and some people took offense to me not liking it because rally racing is kind of a solo sport. One guy even asked why I expected it to be anything else. In reply, I did not expect it to be anything else, I just thought it was not much fun to play a solo race game. By the same token, if someone makes a game about washing the dishes or picking dog poop out of tall grass, I will probably not give it a particularly enthusiastic review. Rally racing is cooler than poop scooping, though.

However, I did say that I thought the actual mechanic of Rallyman was pretty cool. The thing where you roll the dice, pushing your luck as you speed through turns, trying not to accumulate the danger symbols that mean you wipe out - that thing is cool. It works pretty well, and I liked it.

So while I was still not leaping out of my chair to try the expansion, called Rallyman DIRT, I still wanted to try it to see what it added. And let me tell you, it added a lot.

For starters, now there's dirt. You probably guessed that from the title. And on top of dirt tracks, we also have dirt tires. Not tires made out of dirt, you understand. That would be absurd. These are tires specifically designed for driving on dirt. They are still made out of rubber.

In fact, the DIRT expansion adds all kinds of new tires. You can slap on snow tires or soft tires or regular tires or dirt tires, and they each do different things on different terrain. The soft tires, for instance, give you magnificent handling on the first part of your race, and then fall apart so that you crash at the end. The rough-terrain tires let you downshift twice, which is so particularly cool because it lets you drive faster for the whole race. You can speed toward a steep curve in a high gear, and then crank it down at the last second to whip around in the kind of power slide that would normally only be seen in the Fast & Furious movies.

Speaking of power slides, the new tracks for DIRT are pretty damned cool. There are really long turns now, and you can slide all the way around them, or slide part of the way and then downshift to hit the inside of the track. There are intersections that make it so the course can cross over itself, and if you screw up on one of those turns, you could wind up losing two turns backing up and trying it again. We played a long track with snow, dirt and asphalt, and it was really cool seeing how different combinations of terrain and tires can make your car behave.

Also incredibly cool are the spinning cards that tell you how soft tires work on snow, or dirt tires on asphalt, or blown-out tires on dirt, or - well, there are a lot of options, and this was an exceptionally useful solution. They could have just included tables and graphs and stuff, and made the game look like a spreadsheet for an annual sustainability report, but instead we have cool spinning cards that let you know at a glance how much you can push your car, how hard you can downshift, and how bad it is to wipe out in the snow.

So here's the summary, if you're thinking about picking up Rallyman DIRT. First, you can't play it without the original, so try the base game before you get the expansion. If you like it (and you might, if you're not put off by racing against nobody in particular), but you want to see a wider variety of racing scenarios, pick up DIRT. It adds so many cool options that it's definitely worth the purchase - assuming you don't mind playing a racing game without any direct competition.

Cons:
None, really, except that it's still a solo racing game

Rallyman DIRT, like many of the games I've reviewed recently, is only available from Game Salute. Man, am I glad I made up with those guys.
http://shop.gamesalute.com/collections/rallyman-games/products/rallyman-dirt
Posted by Matt Drake at 2:18 PM