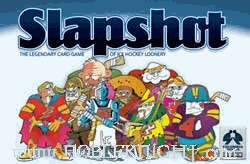 I've said before that I don't tend to be a big fan of sports games. If I want to play a game that feels just like playing baseball, I'll go outside and play baseball. If you're looking to recreate the theme of swinging a bat and throwing a ball, it's hard to beat actually swinging a bat and throwing a ball (of course, if you're doing both of those things at the same time, someone is very likely to get hurt, which is one favorable point for enjoying a board game instead of a sport).

However, I am nothing if not a veritable font of contradiction. I played Slapshot this weekend, and it's a game that recreates an entire season of hockey. It's a sports game, and I liked it, and I didn't play any hockey at all. Come to think of it, outside high school, when we played with a volleyball and brooms on a basketball court, I've never played hockey. I'm from California. You can't really wait for the pond to freeze when the temperature never drops below 60.

So Slapshot is a game about sports, and I don't like games about sports, and I liked Slapshot. Weird, huh? Probably the saving grace is that while it is theoretically a game about managing a team of cartoon hockey players through a season, it's also very abstracted, with a lot more attention paid to building your hand (also known as your team), damaging your opponents' hands (their teams) and winning hand comparisons (hockey games). You don't have to worry about stuff like penalty shots or high-sticking or other words that you would associate with hockey if you knew anything about the sport, which I do not.

The way this works, you'll have a hand of six cards in a specific configuration (three blue, two green, one red). The game gives you ways to swap your cards in an attempt to improve the quality of your hand, and it gives you ways to devalue the hands of the other people at the table. Then, when you think your hand is good, you can challenge another player to a game, and he has to accept or be hit in the face by a really big Canadian guy with missing teeth and a thousand-yard stare.

The hockey game part is where you find out how well you've done at building your team. You'll compare cards, one at a time, with another player. It helps to have the best players, but you can still lose a game to guy who has a mediocre team, but puts them in the right order. Unfortunately, until you've played with the same people a lot, you won't have the foggiest idea what the right order might be, and so randomly shuffling your hand is about as effective as carefully stacking your deck. While this might seem ridiculously random, what it really means is that it's very important to get a solid team before you start challenging everyone to a fight.

A few extra tidbits help to make Slapshot a little more strategic, like goalies who can stop every shot and bruisers who can send opposing cards to the hospital. But by and large, Slapshot is about as difficult to play as Monopoly, but it finishes a lot faster. In fact, this might be the perfect game to break out when your family is staying over for Thanksgiving and you're looking for any way to relate to them that doesn't involve another game of Scene It: Nickelodeon. It's easy to learn, easy to play, and has enough skill to keep your interest, and yet enough luck that Uncle Barney can win.

In fact, if there are marks against Slapshot, it's that it is almost too accessible. I know I sound like a game snob now, but the fact is, lots of us like a pretty sophisticated game, and Slapshot doesn't really deliver sophistication. It delivers hockey in a card game. There's a bunch of luck, and planning from the first play is about as useful as putting a screen door on a boar. Or tits on a submarine. I don't know, it's just not all that useful.

If you're looking for a deep, involved, intelligent game that will challenge your mind and engage your imagination, Slapshot is not that game. But if you want something fun, fast, and easy to play, you could do a lot worse than to pick up Slapshot. And when Uncle Barney doesn't have to fall asleep on the couch while your nephews endlessly guess quotes from iCarly, he'll thank you for it.

Pros:
Fun, fast, and easy to learn
A little strategy and a lot of luck
Great for people who don't play many games

Cons:
A little shallow
A lot of luck

You can get Slapshot pretty cheap, which is good. You just have to go over to Noble Knight Games and order it.
SLAP A HIGH STICK IN THE PENALTY BOX
Posted by Matt Drake at 7:11 PM

Hey, I'm from California and I played hockey plenty. Sure, it was inline hockey (the sport was practically born there), but I played some ice too.

You just have to put in a lot more effort if you want to play hockey in Cali. Definitely not a casual game to get into.