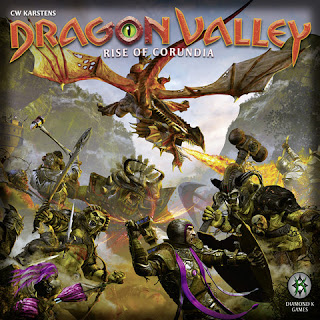 Some games are just not born sexy. Life is not fair. For instance, I was not born sexy. It took me years of hard work to get that way, and now that I am officially over the hill, I am once again not the least bit sexy. That might explain why I am so bitter and angry. It might also explain why my credit card statements shows thousands of dollars billed to massage parlors.

Anyway, games. Not sexy, or sexy. Dragon Valley - not sexy. But like me, Dragon Valley is built for durability and power (actually, wait, that's not accurate. Neither of us is all that powerful, either. But I am magnificently durable). It's a good game, smart and fun, with multiple effective strategies and some really interesting decisions to make. It's just a shame that a game with this much to offer is going to be overlooked because it is not at all easy on the eyes.

It is, however, pretty darn clever. Each player is in charge of a keep that is getting overrun by monsters, and you have limited resources to repel those monsters and ask politely if they would return to their homes and take up macrame. If that doesn't work, you will be forced to stab them repeatedly or throw them off cliffs (for some reason, throwing a flying dragon off a cliff is an effective way to kill it, because these dragons don't just fly away). And if you're feeling especially adventurous, then on top of fending off waves of invading marauders, you can also venture out of your completely unsafe homeland and go take over the monsters' houses.

The monster segment of the game is interesting, but the part that makes Dragon Valley particularly cool is how you get your resources. Every turn, you get a random draw of cards, buildings and troops (including bad guys), and one guy divides those up into as many piles as players. Except he doesn't get to choose who gets what - he has to wait while everyone else picks piles, and he takes what's left. It becomes exceptionally important to divide the piles according to what everyone wants. You may even poison one pile with all the monsters and worthless cards, just so that you can add that one building you need to complete your masterpiece of monster destruction.

This divvying up means that you have to be flexible in your winning strategy, and at the same time, not tip your hand. If you're planning on building a line of magic monster flushers, it might be best not to do it one at a time. Wait for it, survive a few rounds of villainous crotch-punching, then blast out all at once and watch everyone look dismayed. I think Conan would agree that the wailing and lamentation is the best part of beating your friends.

Dragon Valley is a fun game, but I wouldn't say it's flawless. It's not hard, through some really stupid card distributions, for one player to wind up running away with the game while everyone else is just trying not to have dragons fly up their asses. Sitting to the left of the guy who can't figure out how to split the take every turn is virtually guaranteed to make you happy, because he'll do a bad job and then you will get all the awesome stuff and everyone else will get screwed. And sitting to the left of the guy who is ridiculously good at this game means you will routinely get hosed while everyone else benefits from the ignorance of their fellows. This can have the unhappy effect of making the game kind of suck.

Probably the biggest strike I have against Dragon Valley is that, in a game where I will be doing this much violence, I can't do any of it to the other guys at the table. Club orcs like baby seals? Sure, all day long, but I can't even flick boogers at my actual opponents, and that makes it tough to control the guy who is winning the game. You couldn't play it solo, because you need the interaction of the split (plus you're going to win every time), but at times, it kind of feels like you might as well.

However, despite a few slight hiccups, I did have a good time playing Dragon Valley. If the new Space Hulk is a Maserati, then Dragon Valley is a boxy Volvo with a faded paint job, but it works OK even if it's a little homely. There's not much interaction, and your seat at the table can determine how well you'll do. But it does have some neat concepts, even if it is flawed, and it can get you to work. No, wait, the work thing is just the Volvo.

Dragon Valley is currently only sold online through Game Salute, so if you want it, this is about the only place you'll find it (unless you go to a store):
UNSEXY DRAGONS
Posted by Matt Drake at 6:07 PM

Is it at least as good as San Marco which was, like Dominion, a mechanic in search of a worthy game?

I don't know if the mechanics of the game would make it all that interesting. It worked OK, with some flaws, and was decent without being particularly memorable. I'm not sorry I played it, but it's not the kind of instant-win that stays in my office for more than a year.

The seating arrangement is only used for tie-breakers when choosing. The player with the lowest score picks first (gets the best choice for player catchup).