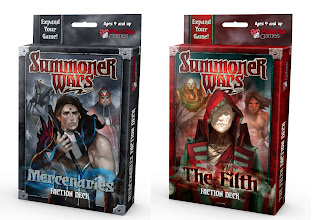 If you're enough of a nerd, you probably know of the existence of the cable program 'Attack of the Show'. It's a nerd thing where they look at nerd stuff and pretend it's all really cool, which it actually is, but nobody but nerds accepts that fact at face value, and I have a hard time believing the super-hot dame on that show is actually a huge fan of Skyrim. But there is one part of the show that's very believable, and it's the part where that guy from Mad Men comes on and talks board games. It's pretty cool that a guy who has a small part on a boring TV show from a cable channel plays games, and it's even cooler that when he was picking his favorite two-player games, one of them was Summoner Wars.

I should make it clear that I had nothing whatsoever to do with the development of Summoner Wars. I played it about two years before it was released, and then did absolutely no playtesting of any kind. But I am pretty good friends with Colby, the guy who created and publishes the game, and so I still like to stand a little taller when I see Summoner Wars winning massive industry accolades and being very, very successful. The only bragging point I have in relation to Summoner Wars amounts to name-dropping, but I still puff up like I actually did something when the game wins awards.

It also helps that Summoner Wars is one of the funnest games I own, which is especially awesome when expansions come in the mail. Colby is a never-ending fountain of gaming genius, because every new faction adds something so cool that it completely reshapes the way you play the game. The most recent additions are perfect examples.

The Filth is a brand-new faction that specializes in being incredibly gross. By itself, that is not much of a super power, to be honest, or neckbearded basement trolls the world over would form their own Justice League. But the byproduct of being disgusting is that The Filth can mutate into fun new shapes, and some of these are just plain crazy. You aren't going to have a lot of guys on the board, but the ones you have will be rocket fueled. Also, gross.

Take, for instance, the spew mutant. This ugly son of a bitch will puke at opponents three spaces away, and if he can hit with both dice, throw in a third damage for good measure. Or the edible mutant, who is covered with Ho-Ho snack cakes that can be peeled off and eaten to regenerate the health of his teammates. Sadly, offering up his spleen as a protein shake is not healthy for the edible mutant, but he's pretty tough, and can do an awful lot of exceptionally frustrating healing before he goes down for the count.

These mutant freaks are a great way to get very tough guys into play, but cheap. It's not all glory days, though - since the original victim stays in play underneath the mutated version, when your enemy finally manages to cap one, he'll get double the magic from it. This means that where it might take you three turns to accumulate enough juice to summon a champion, a lucky opponent who kills three dudes in one turn could be a powerhouse the next. First he cleans you out, then he drops the hammer when your defenses are down.

And if there's anyone prepared to deal out the pain, it's going to be the other new faction, the Mercenaries. This is not technically a new faction - Colby has been putting mercenaries into expansion packs for a while now, but up until this point, all you could do with them is a little deckbuilding. Now, though, the Mercs have their own summoner, and even better, you've got a ton of cards to tweak them exactly the way you want.

Even without tweaking, though, the Mercenary deck is bad-ass. They specialize in knocking down walls. And not metaphorically, like when a social worker connects a junkie with his long-lost dad. No, they really just screw up actual stone walls. The summoner will do automatic damage to a wall, and then get extra cards for it. One champion will bust walls and restore magic cards from his discard pile. One of the commons will stand next to enemy walls and steal magic. And just when you thought it was safe, because all the walls are down, they'll bring 'em back.

I can't even decide which new faction I like better, because they are both insanely entertaining to play. As with every other deck in Summoner Wars, you have to play the teams correctly to take advantage of their abilities. The Mercenaries, if played right, will have their enemies trembling, without any way to summon. The Filth, if played right, will turn their enemies into bird-monsters and take control of them. Either way, these are two fantastic additions to a fantastic game.

Yes, with the two new factions available for one of my favorite games of all time, Summoner Wars just keeps getting better all the time. You can ask that Mad Men guy, if you don't believe me. He's kind of a nerd, but then, if you're reading this, the odds are that you are, too.

Normally, I would link to Noble Knight Games at this point, and send you scurrying for your credit cards. But they're sold out, and since Colby is my friend, I would rather you bought from him, anyway. Plus, this way you can get the promo cards:
http://www.plaidhatgames.com/store.html
Posted by Matt Drake at 2:46 PM

I recently bought Summoner Wars: Master set. That's as good as you said! I'm looking forward for these factions!

I was wondering when you'd get and play these, since I figured Colby would send you them and you'd probably like them.

I agree that they're both very cool. I'm continually impressed by how robust this system is; Colby really did some amazing work with the main design.

And yeah, the Filth are totally ugly, but they're supposed to be.

I would have played these weeks earlier, but thanks to my son burning my office down, I wasn't able to play them until a friend gave me some spare parts. I also have the deck-builder expansions, but I can't review those because I don't remember the originals. Can't really play them with just the cards in the box, so that review is going to have to wait a few more weeks.