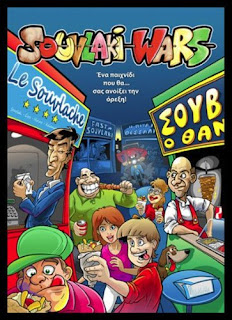 The other day, my wife called me and told me I just got a package from Athens. I thought she meant the Athens that's in Texas, because I live in Texas and couldn't really figure out why I would be getting mail from Greece.

I was wrong. It was from Greece, and it contained a card game about running a fast-food restaurant. Apparently, in a nation where people are lighting themselves on fire because it's cheaper than paying for a cremation, there's still someone with enough money to publish games designed to taunt their hungry countrymen.

In Souvlaki Wars, each player will own a restaurant that serves gyros, souvlaki (this is Greek for 'meat on a stick'), french fries and soft drinks. Even the high-end French eatery only serves Greek fast food, but you get it brought to your table by a snooty asshole with a nasal accent. The other place, you have to brush the cockroaches off your shaved meat sandwich before you eat, but at least nobody tries to feel you up while they put a napkin in your lap.

The game is a lot like those Flash games you can play where people come into your cake store and ask for chocolate cake with white frosting, then you get that guy his food and the next guy wants white cake with chocolate frosting, and then the next guy wants a cupcake shaped like a boob. You get some food cards every turn, and then you get customers, and you try to feed your customers before they get pissed off, cover themselves in kerosene, and start lighting matches.

This doesn't sound like a lot, honestly, but it turns out, Souvlaki Wars is a pretty fun game. You will have to get past the fact that the English is an afterthought and most of the cards are in Greek, but once you do, you'll find out that along with being financially destitute, Greek people actually have some idea how to make cool games. If they would apply this same brilliance to balancing the national budget, maybe they would have fewer human torches and more games about Thermopylae. It's cool that I can sell gyros to fat people, but it would be even cooler if I could yell, 'This… Is… Fattening!'

(As I write this, I am suddenly aware that I am insulting an entire nation while forcing them into an ancient stereotype. At some point, I will need to switch over to jokes about bushy moustaches, hearty soup and fisherman's caps.)

There is a pretty healthy amount of strategy in this game, and no small amount of luck. The designers of Souvlaki Wars were great self-editors - they added exactly as much as the game needs, without dumping a bunch of extra stuff in there. There are event cards that can get you an edge when you need it, or take one guy down a peg when he's running away with the game. You can pick some of your customers, and avoid the ones who have gyros when you're holding a hand full of meat sticks and Diet Sprite. And then there's a luck-of-the-draw element that gets you phone orders, and these are random, and lots of times, you won't have the right food because you blew your load last turn and now all you have is a 50-gallon drum full of french fries.

We enjoyed Souvlaki Wars. It moves fast enough without feeling rushed, but still provides enough tricky decisions and smart plays to engage the mind. It's definitely a lighter game, not one you're going to plan an evening around, but there's enough meat on this kabob to satisfy a light appetite. The art is fun, the game is easy to learn, and it's not often that I get to enjoy a game about serving food (unless it involves lingerie models and whipped topping, and then my wife will totally murder me).

Cons:
Games about restaurants are low on my list of 'damn, that's a cool idea!' games
Not all that beefy, even though it's about beef

You know who doesn't carry small-press restaurant games from Greece? Yep, Noble Knight Games. They do not have this one. I actually can't figure out where you would buy this game. Probably you can find it in Greece.

ANNOUNCEMENT: The winner of the Minion Games contest was David Kartzinel, who will get a copy of Those Pesky Humans. Fun game. Good call, David.
Posted by Matt Drake at 7:25 PM