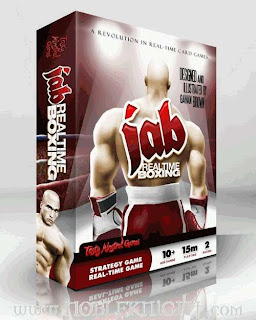 My kids like to play a game called ERS. I have no idea what that stands for. Maybe Emergency Room Services. That would make sense, because when my kids play it, the game often ends in injuries. They have repeatedly attempted to get me to play with them, but I have generally avoided it based on the fact that I do not want to play a game where my kids will beat me. And I don't mean they will win; I mean they will physically assault me, because ERS is one of those fast-eye coordination games where you throw down cards really fast and then slap each other to try to grab them at the right times.

I mention all this because last night, I talked my daughter into playing Jab with me. Jab is a real-time boxing game you play with cards, and because it is so fast and frenetic, it reminded her of playing ERS. Specifically, she said, 'I don't like this. Let's play ERS.' Sadly, I had to agree, and I don't even want to play ERS.

The premise is interesting. You have cards representing your boxers, and you have cards representing punches. You play your punching cards onto the fighter cards and try to score points by having more punches hit your opponent. If this were the whole game, it would be kind of stupid because all you would do is put down cards and then add them up and then realize that it was a tie. But there's more.

There will be one card, off to the side, listing a specific set of punches, like hook/jab/haymaker. If you can get all those cards on your opponent, you can take that combo card and score mad points. And if you can put down a haymaker and then a color-matching punch, you can stagger your opponent and make her stumble around like Charlie Chaplin screwed up on whiskey and vicodin.

These options, and a few others in a similar vein, do create a bit of a sense of strategy, but it's not easy to grasp that strategy because you're basically just slapping down cards as fast as you can. If you stop to analyze the table and look for potential scoring opportunities, the other guy is going to plant a haymaker in your left nostril and send you to the mat. So you have to be watching eight to ten piles of cards that change at a rate of about one a second. My daughter summed it up perfectly when she said, 'Son of a **** in a **** with a round rubber **** and half a side of **** covered in motor oil and fish guts, this is hard.' OK, I'm paraphrasing. She can't pronounce asterisks any better than you can.

There really is an insane amount of information to process here. Jab has you playing cards as fast as you can, trying to counter-punch and avoid the haymakers and connect with the combos and otherwise figure out how to come out ahead. This is especially difficult because of how fast things will change - you'll decide to go with a combo strategy and score a bunch of extra points, but then your opponent will lay down three haymakers that you'll need to block and you'll have to come up with a new idea, because the old one is going to get you a bloody nose and little birds flying around your head.

I admire the designer of this game for creating something I have never seen before. The idea of real-time card games is not new (at one point, I owned all the decks for Brawl), but the implementation of this game actually channels the concept of a boxing match pretty well, without making you put on gloves, take off your shirt, or have Rocky Marciano's trainer cut your eyelid with a razor blade. I'm glad I have the game, just to see how it works. It's sort of like owning an old transistor radio - you're not going to want to listen to it when you have a perfectly good MP3 player, but it's still cool to take it apart and then lose the screws in the carpet so someone else in the house can step on them in the middle of the night when they go to get a drink of water.

Sadly, I cannot admit to having enjoyed playing the game. While it seems like it could be a fast-thinking strategy game, it devolves pretty rapidly into a flurry of random card plays followed by some math. Sure, you can finish in fifteen minutes, but it's just not likely to be fifteen minutes you enjoy. Spend the time shaving and plucking your eyebrows, and you can sleep in a little more in the morning.

The real downside to last night's games of Jab (we tried it several times, to see if it got better) was that now, my daughter insists that I play ERS with her tonight. If I don't write a review Friday, it's because she broke my fingers trying to steal a combo sandwich, whatever the crap that means.

Cons:
High concept devolves into random card-slapping after thirty seconds
Puzzling, because it looks cool but just isn't that much fun

It's worth running down a copy of Jab just to see how a game this unique would work. It really is unlike just about anything else. You can get a copy for less than 20 bucks, right here at Noble Knight Games:
GET PUNCHY
Posted by Matt Drake at 2:20 PM

I hear you on the game. We spent money on the game, and found some similar frustration. Aint fun to try to "strategy" when you cant even spend 0.5 secs to process whats around the board.

But we already spent the money, and we finally did some things to help us play the game.

First, we must shout out the name of every card we slap down, and also shout block when blocking. This was probably the single most useful thing for us. It frees up a good part of your attention so you can focus on getting combos and counters.

Second, we pause at every event shouted out and check: combos, counters, staggers, etc. Then we bump fist and continue. We thought about penalties for miscalls, but we are too lazy to do that.

Actually, we don't have a third. But we did find that we can't spam at this game. If someone amongst us spammed all it took was about 2 to 3 blocks in each pile to ensure that the spammer loses.

Mikko, now that I know what ERS stands for, I kind of want to play it again.

Manly, those sound like ideas that would drastically improve Jab. I may have to try to go back and play it again, and see if I like it with some improvements. Thanks for the ideas.

If another player is just slapping down cards, I like to sit back and just watch for counters (without playing many cards at all) with an occasional Haymaker block. After you pull a few counters and deplete their health, the other player will slow down (and then you can be a bit more aggressive)...

This game can turn into a slap fest, but careful play can slow the game down.