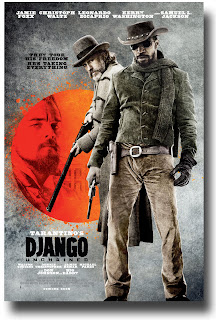 If you read this blog often enough to know much about me at all, it should require almost no effort to figure out if I liked Django Unchained. If you know me at all, you probably would guess that when Quentin Tarantino makes a western about a black bounty hunter who kills, like, everybody, I would like that movie. And if you did guess that, you would be right.

However, it might come as a surprise that despite enjoying the ever-loving bear crap out of Django Unchained, I have many complaints. If there's a warp in the space-time continuum that makes Quentin Tarantino actually read this review, I hope he can take it with a grain of salt, because I'm about to say some things about the man that might make him not like me very much.

Django Unchained is exceptionally violent. And I love that. I mean, that's a reason to watch all by itself. A guy gets his head caved in with a hammer. A man is shot while carrying a bag of dynamite and explodes. There's so much fake blood that they had to have cases of it shipped in from Mexico (I made that up). And yet, despite all this graphic murder, we were laughing the entire time because the violence was so exceptionally absurd.

For instance, in one scene, a man is shot in the head with a rifle while he is lying on the ground. The blood from the wound flies five feet into the air as if thrown from a paint bucket. Apparently the man was storing gunpowder in his head.

Another time, a woman is shot with a revolver fired by a man standing on the floor above her. She flies away at an angle perpendicular to the shot, lifted off her feet as if shot in the groin with a cannon strategically located in the hallway opposite her. It was like watching a cartoon.

So the violence was just silly, and the movie was almost three hours long. This could have been a 90-minute movie. Two hours, max. But it's Tarantino, and the man just does not know how to edit himself. Seriously, man, cut something. The dialog is not that riveting.

Also, does Samuel L. Jackson have a clause in his contract that says that at some point in the movie, he must be allowed to use profanity that came into vogue in the 1960s? Actually, no, hold on - that part was pretty awesome. Jackson is like the Chik-Fil-A of the f-bomb - he didn't invent it, he just made it awesome.

Now, I want to emphasize that overall, Django Unchained was an absolute blast. It was incredibly fun to watch. I loved most of it. But this is not the Quentin Tarantino that made me a rabid fan with quick wit, tight plots and amazing dialog. This is sloppy and self-indulgent. It's what a great artist makes when there's nobody around to tell him which parts of his art suck.

Django Unchained had dialog to rival True Romance - it just had too much of it. It had some of the mad-cap violence that surprised you in Pulp Fiction - but too often, it was stupid and campy. It had the superb acting you saw in Reservoir Dogs - but like every other movie since Reservoir Dogs, it also had to have a part for Quentin Tarantino, and I'm sorry to let you in on this little secret, boss, but you are a VERY BAD ACTOR.

I referenced True Romance, Pulp Fiction and Reservoir Dogs because those are Tarantino's best films. He has been completely unable to re-bottle that lightning (though he came close with Jackie Brown, only that was actually an Elmore Leonard book adapted for screen, so it was kind of a gimme). You see the same things in every one of the movies that he makes these days - too long, crap editing, poor timing, and silly bloodshed.

But this time, it works. Django Unchained still suffers from all the same patented Tarantino flaws, but in this particular instance, it's a hoot. The campy violence is hilarious fun. The dialog (even though it's a bit gassy) is outstanding. The acting (with some notable exceptions) is as good as it ever gets. The plot is fun. And when Django kills everyone and then makes his horse do a moonwalk, you know you've just seen what it looks like when Quentin Tarantino makes a western.
Posted by Matt Drake at 9:27 PM

FWIW: I dont think he played anything in inglorious basterds, or am I mistaken?

Yeah, he plays a dead Nazi. He gets scalped.

Wow, I totally missed that. I guess he showed his best acting in that movie then ;-)