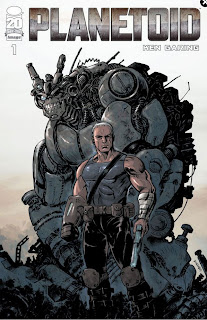 I love a good sci-fi comic, especially if there are no over-sexed dames in skin-tight leotards who can shoot fire from their nipples. Science fiction is such a great genre for comic books, because it's difficult to describe some of the crazy stuff you see in standard written fiction. Planetoid sounded cool because it was a sci-fi book from Image, which makes it kind of a double-whammy of sweetness. Sure, Image published Youngblood, but they also do Walking Dead, so they still beat Marvel and DC.

Planetoid is a five-issue miniseries about a bad-ass SOB who crash-lands on a planet that has been strip-mined into a wastebasket. The surface of the planet is either toxic sludge or metal scrap, except for the big flat area where a few hundred people make their home. This planet is insanely hostile, because there's an alien group in the area that really hates the squatters. Never mind the fact that most of the survivors would kind of like to leave, the aliens want to harvest them, lobotomize them and turn them into slaves.

This is a dark book, and Silas, the hero of the book, is a dark hero with a dark past. The art itself is not that dark. Well, not literally. Like, you can see it just fine. But the evil aliens are twisted, the robots are efficiently brutal, the surface of the planet is barren and disgusting, and the food is just plain nasty. Oh, and there's this killer magnetic field that makes it so you can't leave orbit. It's just unkind.

Speaking of the art (which I did when I said it wasn't all that dark), it's perfect. The artist and the writer are the same guy, which means that the dude knew exactly what he wanted Silas to look like, and just how tall to make the snake robot, and how the froggy aliens would stand up. Plus it's marvelously detailed - where many comic artists would shortcut out backgrounds when they can get away with it, Planetoid spares no effort in showing us every scene in rich color and brilliant detail.

The story, by comparison, is a little stark. It feels rushed, like it could have been twenty issues and it got crammed into five. It's still a remarkable story, and I completely enjoyed it, and you can get the whole thing for nine bucks on Comixology and be happy you did. But it could have been developed into a much longer series, and I would have loved every issue. It's great fun to know how it ended (it just finished up a few days ago), but I wouldn't have minded getting to know all the people better. From the tough warrior chick to the blue alien, the old hermit to the loyal lizard sidekick, the cast in Planetoid is individual and entertaining - but they seem like you just get a taste of how cool they might be before the book is over.

Not that I'm complaining, really. Too many comics get cut before they can finish the whole run, and so I'm delighted that I was able to read the whole story of Planetoid and it never got the axe. It's fun to look at and fun to read, a cool tale of defiance and redemption and bravery and loyalty. It can be hard to find a good science fiction comic that will feel believable, since most seem to feel obligated to include stupid time travel or stupid spandex or stupid raccoon-headed aliens who smoke cigars. Planetoid is a blast, and even if it does leave me wanting more when I know it's over, I enjoyed it immensely.

You can find Planetoid at your local comics store, or if you're like me, Comixology:

Absolutely fantastic hyper-compressed storytelling, thank you for pointing me towards this. Looking at the prices in the local comic shop (and the time they would require to take home the last two issues) I ended up buying them on comiXology, as I did with Chew. I still prefer the feel of a book between my fingers though, so Locke & Key are bought in hardcover-collections, but for these mini-series comiXology is perfect. Thank you for pointing me to that app as well.

Have a good one.

My pleasure, brother. Thanks for reading!