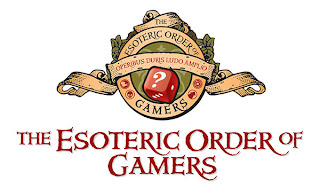 Universal Head is my favorite Australian, a guy who tirelessly goes through crappy, poorly written rules and turns out hundreds of summaries that are both easier to understand and better laid out than the originals. He's a mad genius of making games easier to play. I couldn't tell you how many of his outstanding player aids I've printed out when I just couldn't understand the 46 pages of rules that were in whatever monstrosity of a game got delivered to my house.

For a long time, Universal Head has run Headless Hollow, a blog where he talks about... whatever crosses his mind, apparently. His most recent post is about the death of the lead singer of the Divinyls, a band I couldn't be bothered to appreciate in high school because I was too busy listening to whatever musicians offended my parents the most. He's a crazy good writer, but apparently he wanted something a little more focused, a little more useful, a better resource for people looking for the fantastic game aids he churns out like butter.

The new site is called the Esoteric Order of Gamers. There's this one page that's a bit of an introduction, and it tells you that you found the site because you were invited, and it's an exclusive club or something. And then he emailed me yesterday to ask me to tell you about it, so I guess you're all invited, even if the only games you play are Scrabble and Super Mario Brothers.

I checked it out at some length yesterday, and man, it's awesome. For starters, he's got all the game aids he's done, and they're all organized, and you can sort by genre or just see all 200 or so and find the one you need alphabetically. So that freaking awesome.

Plus he's got kind of a blog thing, only it's sort of below the fold so you might miss it. But Universal Head is a bad-ass writer with a serious gift for the written word, so make sure you scroll down so you can see it (and then tell him he ought to rearrange those parts so they're easier to find). The articles are really good, and he's got a sort of Kickstarter roundup - an idea I am pretty sure I'm going to steal.

Anyway, enough jibber jabber. Run over and check it out. Universal Head is wicked awesome, his site is full of cool stuff, and he probably writes better than I do, without having to resort to jokes about oral sex. He's right here:

Metaphorically speaking, I should add ... I'm not *that* desperate for publicity ...

I've been silently reading Matt's blog for a long time, but I can be quiet no longer. That first comment from Universal Head was freakin' hysterical. Made even funnier in my head by the deadpan, Crocodile Dundee treatment I applied to reading the comment, now that I know Universal Head is Australian.