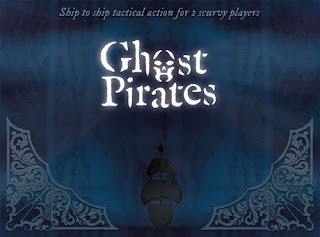 Everybody knows that the best kinds of pirates are ghost pirates. They still have peg-legs and eyepatches and parrots, and they still say 'arr' all the time, but they also have cool curses where they look gross in the moonlight or bullets can't kill them or whatever. In a contest between ghost pirates and anyone else, the outcome depends entirely on who they're fighting. I mean, what if they're fighting Cthulhu or something? He would just eat their ghostly souls and then take over the world. Unless they were 1920's gumshoe pirate ghosts. Then they would win, but they would all go insane.

This explains why the game Ghost Pirates is called that and not just Pirates. If you look at the game, it looks very much like actual pirates doing actual pirate stuff (namely fighting each other and swiping valuables). There's no reason they had to be ghosts, really, except that ghost pirates are inherently more cool than regular pirates.

I guess there are a few more indicators that something weird is going on with these pirates. You have your ship sitting directly across from another ship, and they are headed opposite directions, and you never actually sail past. You're both just kind of stuck where you are. That's because you're ghosts.

And your goal is to get the other guy's captain to fall overboard - off the front of the boat. You do this by repeatedly whacking him with something heavy and/or sharp. Every time you pop him a good one, he moves forward. If he was a normal, every-day pirate, he could just move around on his own, but since he is a ghost pirate, he only moves if someone sticks dynamite in his pants. And then he only moves forward, never backward.

Oh, and these are probably ghost pirate ships because you can add parts to them as you fight. You could add cannons right in the middle of the fight, or a cargo hold full of stuff that was not there a minute ago, or even another sail. And then the other guy could shoot those parts with a cannon and they would disappear and your ship would get smaller. Normal ships would just go underwater and then sharks would eat all the normal pirates, but these are special ghost pirate ships, which explains how they can have parts added and removed on the fly. Well, they're either ghost pirate ships or Lego pirate ships.

Luck, I think, was common to both normal pirates and their extra-planar cousins. So the fact that Ghost Pirates is about 63% luck does not help to differentiate that these are ghosts. Just as far as the luck goes, these could be normal old pirates. There's a lot of chaos and die-rolling and random card draws, and all those things would have been right at home on a thoroughly mundane pirate ship.

However, Ghost Pirates is done in about 20 minutes, so I think that indicates ghost pirates, for sure. See, real pirate battles could last hours, as two rival pirate captains would sail around in circles, standing in crow's nests and saying, 'off the port bow!' and 'raise the mizzenmast!' and 'strike my dinghy!' Ghost pirates, on the other hand, were in a hurry. They would have this whole thing planned out ahead of time and agree where they were going to meet up. It would go something like this:

Ghost Pirate Ralph: What are we doing Saturday?
Ghost Pirate Frank: Want to do that thing where you try to stick dynamite in my pants so I jump off the front of my boat?
Ralph: Sure, but I don't have all day. I promised the missus I would take her to the ghost mall.
Frank: No prob. I actually have yard work. Let's just meet up at 2 and knock this out real quick, then we can get back to our Honey Dos.
Ralph: Sweet. See you there. Arr.
Frank: Yeah, arr.

Ghost Pirates is a fun game, if you're just looking for a quick distraction with a lot of luck and some fun maneuvering. There are smart plays and ridiculous rolls, with copious bloodshed (except the ghosts don't really bleed, they just get ectoplasm everywhere). The art leaves a little to be desired, but the game is easy to teach and easy to play and a good way to blow a lunch break and still have time to finish your sandwich. I wouldn't recommend Ghost Pirates if you're trying to find something smart and complicated, but it's a fun distraction.

Cons:
Mediocre art
Not much depth

Ghost Pirates is distributed by Game Salute, which means that's the only place you can get it online:
http://gamesalute.com/games/game.php?game=275
Posted by Matt Drake at 7:57 PM