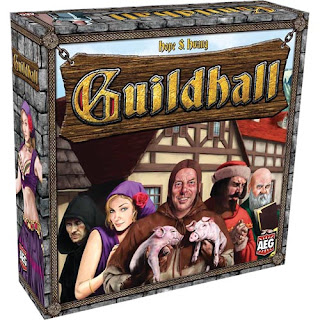 Some day I'm going to write an article about the psychology of board games. And one thing that I'm definitely going to discuss is whether size matters when we're talking about the box (I encourage all of you to quote that out of context). If you put your game into a bigger box, does it make it more valuable? For many gamers, that's a definite yes.

For instance, Guildhall is basically three or four decks of cards and a handful of cardboard tokens. This could have come in a fairly small box. Yet it comes in a bigger box than some other games I own that have a lot less in the box, and I have to wonder if that's so that the game looks like it should cost more than it does.

But then, it doesn't seem like this is a straight money grab, because you can get Guildhall from Coolstuff for like 20 bucks. And this is way more than 20 bucks worth of game - as soon as we finished, we checked the clock to see if we had time for one more. And then the wife and I concocted plans to shanghai our kids into playing. It's a damned fun game, and a hell of a deal at 20 bones.

But it doesn't look like it should be. Seriously, it's all cards, and not even a lot of cards. Dominion - now that is a lot of cards. Nightfall - lots of cards. Guildhall - not really that many cards. Yet a game of Guildhall will take longer and potentially be a lot more engrossing than either Dominion or Nightfall, and for less money. This is a deeper game than Dominion or Nightfall, with some great strategy, and there's no way that the size of the box tells you if it's any good.

So you're reading this far, and we're starting the fifth paragraph, and you're like, 'OK, Drake, so it's fun, but what the hell is it?' And you're right, I have taken far too long to get to the point. I should probably have opened with a description, so that we don't wind up going into the sixth paragraph without me actually telling you what Guildhall is all about, and then being forced to end a sentence clause in a preposition.

Guildhall is (in theory) a game about building a guild that employs all the different people in town into organized groups. Guildhall is (in practice) a game about making sets of different cards and exploiting the abilities on those cards for maximum gain. The theme is mostly superfluous, but the game is still a hell of a lot of fun.

For instance, say you've been able to put two dancers and two weavers into your guildhall. You're trying to make sets of five of each. So you play another dancer from your hand, and she lets you draw two cards and play again. And then you draw a weaver you can use, so you play that, and because you've already got two weavers, you can put two cards right into your guildhall and then pick up one card. So you play two assassins into the guildhall, holding a third for next turn, and pick up a dancer so that next turn you can do the whole thing again, and this time kill somebody.

That was kind of a convoluted example, but it's also pretty typical. You're trying to build your groups until you have five of a kind, which you can then trade in for victory points. There's no one strategy that's guaranteed to win you the game - in one game, I went straight-up Jack the Ripper to keep my opponents in check, another player was just sending his farmers to work, and yet another kept swapping cards between us so that she could complete her sets.

If you love games with a lot of theme, and you like to be able to hear the swords getting stuck in ribcages, you're going to hate Guildhall. Or, rather, if that's the only kind of game you like, you'll hate Guildhall, because I love games with swords to the ribs, and I think Guildhall is a hoot. If you like card games with matching elements, if you like strategies that have to be adaptable, if you like holding a bunch of cards and seeing the killer move come alive in front of you, you really ought to just dig up a 20 and buy Guildhall. If you need an added incentive, the box is very large.

Cons:
Theme is not all that useful
Not sure why the box is this big

I picked up this game and Arctic Scavengers, on your recommendation. Got to play the former today. It was a great time. We went from "eh?" to "ooooh" to "I am playing ALL OF THE CARDS" in about five turns. Can't wait to give it more plays, now that some combos start to appear.