Board Game Review - Lord of the Rings 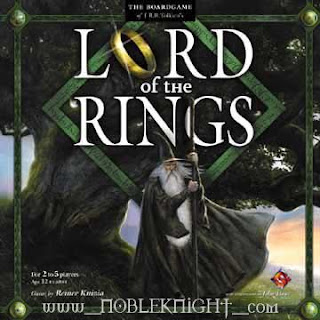 If you're a fan of Reiner Knizia's games, then one of two things is true. Either A) you have a well-developed sense of humor, or B) you don't read Drake's Flames. Reiner is my Numero-Uno, go-to guy when I need a game designer to mock, and I know that over the years, I have lost readers who really love the guy.

This review is going to cost me a few more.

Many of my readers may have heard of a trilogy of movies that came out in the first few years of the new millennium titled 'The Lord of the Rings.' Although this sounds like a story about either a circus owner or a fast-food fry chef, it was actually a D&D-inspired knock-off that went on to spawn a whole bunch of video games, card games, board games and people who start sentences with 'methinks.' But before these movies even came out, Reiner Knizia made a game with the same name, and it was a cooperative game where you were all trying to beat the bad guy (named 'Sauron,' because they apparently needed a name that was almost exactly the same name as 'Saruman,' both of which appeared in the same stories and were horribly confused by many people, none of whom were probably readers of this website). You could tell Reiner's game came out before the movies because before the movies, there was a ton of great illustrated art for the Tolkien books, and after the movies, nobody used anything except pictures of Viggo Mortensen.

So Reiner's game, being a Reiner game, used the basic theme of the Tolkien books, developed a couple ideas, then threw it out and made the game essentially a math exercise. Then he went back through and slapped thematic elements onto a game that was really just an exercise in managing your hand of cards, so that when he was done, the game looked very nice (because it did not have any pictures of Viggo Mortensen) and was not very much fun to play.

This is essentially how Reiner Knizia designs a game. He analyzes it from every angle, ponders it while he is sitting on the toilet, then designs a game that will show off his brilliance at mathematics while penalizing everyone who does not like math as much as he does. In some games (such as Atlanteon), this is reinforced by a preponderance of math and a complete void where the fun should be. In some games (like Maginor), the math is minimal and the game is actually entertaining. Lord of the Rings falls on a spectrum between these two examples, by being light on math and also not really that bad.

When I play a game and really like it, the phrase, 'not really that bad' will only be used if I am discussing the quality of fried catfish you can get in Vancouver. I am given to hyperbole. Therefore, I want to emphasize that when I describe Lord of the Rings as 'not really that bad,' I actually cannot imagine a reason you should play it, simply because there are so many games that are so much better. I can think of a half-dozen cooperative board games off the top of my head that are all much more fun than Reiner's game. But in all fairness, this was also designed almost 15 years ago, and lots of people have made awesome stuff since then.

Most of the game is a breeze. You'll go through, almost laughing at how easy you have it and how lovely it is to beat the game. Then you get to the last part and Sauron actually pops out with his big-boy britches and lays down an ass-kicking, and then Pippin (who is currently carrying the ring, because the hobbits take turns) gets eaten by the red eye and the game comes to an abrupt end.

So, to be clear, I didn't much care for Reiner's take on Lord of the Rings, either with this game that blatantly ignores any elements of the story in order to make a game that is about as interesting as building a good spreadsheet, or with the other one that was designed for kids and was utterly retarded. However, I also know that many people really enjoyed this game, probably because they were Reiner fans who liked Lord of the Rings and math. If you are one of those people who likes Reiner, Lord of the Rings and math, and you have read this far, you almost certainly have a well-developed sense of humor. That, or you're just waiting to get to the comments section so you can insult my genetic heritage.

2-5 players (because someone can be Fatty)

Pros:
Uses some of the amazing illustrations created before the movies
Not very hard to play at all

Cons:
Uses mechanics that are essentially just matching symbols on cards
Not very fun to play at all

Noble Knight Games doesn't sponsor me any more, but they still have some awesome deals on out-of-print games. Like this one, which they have for what amounts to crazy cheap because it is used:
FORSOOTH METHINKS WELL MET
Posted by Matt Drake at 7:56 PM

D & D inspired??? Was that even around when Tolkein was alive? That's the funniest shitbI read all day!

Yeah, as that Anonymous guy/gal said above, Lotr is not a D&D ripoff but the other way round (maybe you knew it and were just trolling, which I guess is quite appropriate in this context). Other than that, I must agree with the review, and I will add that it took me like four solo plays to figure out the damned game; I dunno, I must be dumb or something. I'd take BSG over this thing any time.

Haha! OK, I'm sorry, it was a joke! Yes, I know Tolkien was first. I know Gygax and Arneson ripped off Tolkien. I just sort of assumed people would get that, like when I pretended that I thought Lord of the Rings might have been about onion rings.

Awesome, perhaps my new favorite review. I think I traded my copy long ago for a couple hard to get heroscape packs. I don't miss it one bit.

Loved the D&D ripoff bit too.

IN fact saying it ripped DnD is accurate since Matt was talking about the movies. The books areone thing, poetic things of beauty, the movies are great too, but they ARE DnD riffs!

Your genetic heritage is...less than good! Take that!

I respect it for that, even if now it's not anywhere near the best, just how I respect Dominion even though it stinks compared to later, better deck-building games.

Hey, Matt. Have you ever tried Tigris and Euphrates? I know it's heavy on the abstract side, but it's also prone to bloodshed and dickish moves we all love so much.

No, I've never played Tigris & Euphrates. To be honest, it doesn't really look like a whole lot of fun to me.

I agree wholeheartedly with you about LOTR coop game. Tried it, didn't think much of it.

At any rate, Dr Knizia's games are not all bad. In fact, maybe he can make up for all the things he never did to you if you try playing his other LOTR--Lord of the Ring: The Confrontation.

It's an easy, brutal, pretty strategic, and short game.

And eh, if this one still gets a brutal tongue lashing from you, then there's no way Dr Knizia can make amend with you for the things didn't do.

Oh, and there is no mathematical overanalysisism.

Reiner ain't all bad. I know that. I liked Maginor, for instance. But he also made Atlanteon, and that was a travesty, a crime against humanity.

And if I get a chance to try that Confrontation LOTR game, I'll give it a shot.

Just went back to read your atlanteon review to see why it pissed you off so much. :) Our local gaming store in Bangkok also had it, and it stayed on the shelf for a very very long time. Not sure if it's still on the shelf even.

Anyways, great to know you'll give Confrontation a shot if you get the chance.

Also, great job on the reviews. Your mastery of offbeat spins on things stimulates and tickles my funny bone every time.