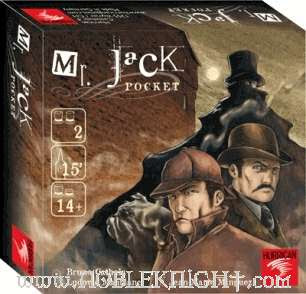 This is a review of Mr. Jack Pocket, which is not to be confused with Mr. Jack's pocket, which is where the school janitor keeps his tobacco, as long as the janitor is named Jack and you live in Texas, where for no reason I can completely understand, it's OK to call a man by his first name as long as you put a 'Mister' in front of it, even if you're six. Maybe I'm just not used to it because my old man was a Baptist preacher, and if I had ever referred to an adult by his or her first name, I would have been taste-testing a bar of Irish Spring.

No, this is a review of Mr. Jack Pocket. It's a game. It's like the board game version of Mr. Jack, but small enough to put in your pocket. So the name is a great case of truth in advertising. What may come as a surprise is there's a pretty damned solid amount of game in the box, despite being about the size of a hair brush.

The premise of Mr. Jack Pocket is a lot like the original. One guy plays the fun-loving ne'er-do-well who goes by the name Jack (and apparently he's in Texas, which is why they call him 'Mister'). He's on an evening jaunt through the streets of Whitechapel (which, incidentally, are not in Texas) and, through a series of hilarious and madcap hijinks, manages to kill a bunch of women. Tough break, Jack!

The other guy plays the investigators who are hot on Jack's trail. In a classic mix-up of reality and fiction, the investigators are Sherlock Holmes, Watson and a dog (not only am I surprised to find out that Holmes hunted Jack the Ripper, I was a little bit confused by the presence of the bulldog. I don't remember reading about him). They can't actually go into Whitechapel, probably because the walls keep spinning around, but they can look down the alleys and try to spot Gentleman Jack before he can get to a dry cleaner and do something about all the bloodstains.

Every turn, you'll have four actions to choose from. First the Holmes Gang will pick one, then Jack will pick a couple, then Holmes will pick one more. Then they all flip over, and you use the ones on the back, but this time Jack picks first.

The object of all these flippy actions is either to narrow down the suspects running around the streets until only one is left, or to stay hidden long enough to dump the murder weapon and call a cab. Every tile starts off with a picture of a suspect, but as Holmes and his crew manage to eliminate suspects (not by killing them - that's Jack's gig), they flip upside down. When only one is left, that's your killer. If the game goes long enough and there's still more than one suspect, Jack makes like a tree and leaves.

The actions are interesting enough, especially considering that the entire game would fit into a jacket pocket. Some of them move the crime fighters around the outside of the area, either trying to block their view of suspects (if you're Jack) or peeking around corners to spot as many suspects as possible (if you're the Scooby Gang). Some actions actually change the streets of Whitechapel by turning the streets to block or allow line-of-sight to the denizens, or by physically swapping a couple places on the map.

(It is worth noting here that in real life, Jack the Ripper did not escape by physically altering the landscape. If he had been able to do that, he probably would have killed a lot more people. Because, you know, he would have been a total bad-ass capable of rearranging entire city blocks with the power of his mind. That would have been pretty awesome, actually, though it would also have been very scary. Instead of Holmes and Watson, we would have needed James Bond.)

The result of all this moving and dodging and hiding and what-not is a very interesting game of cat-and-mouse. Just like in the original game, you have to choose your actions based not only on what you can do with them, but also on what your opponent can do with what he has left. This is the most challenging and fun part of the game, and it is also the reason that my daughter beats the pants off me at this game. Apparently, I am getting dumber as I get older, because no matter which side she plays, she always wins. Since she is a teenager with no respect for her elders, I personally find this very disheartening.

Mr. Jack Pocket is an incredibly good adaptation of Mr. Jack, and is worth owning even if you already have the original. The basic idea and intellectual prowess needed to win the game have not changed. What has changed is the way the game is played, and it's fun to engage in a battle of wits even if you have grown bored of the original game.

I'm not usually a fan of pocket games, because they usually have to cut out too much of what makes a game fun. But in the case of Mr. Jack Pocket, I'm actually pretty pleased. I can toss it in an overnight bag to take on a weekend trip with the family, and have a surprisingly deep and tense game that both of us enjoy (unless my daughter decides to rub it in). I can have just as much fun with any version of Mr. Jack, because while they are all very similar, each has enough variations and twists to make them memorable. So long story short, I am impressed and pleased with Mr. Jack Pocket, especially because it is not full of chewing tobacco.

Pros:
Everything that I like about Mr. Jack, but with new ideas that keep it interesting
The similarities will draw you in. The differences will keep you there.
Very portable

If you're looking for a fun two-player game, Mr. Jack Pocket is a great pick. It helps that it's portable, but honestly, it doesn't have to be - you can have fun playing it at home. And you can get it for less than fifteen bucks, right here from Noble Knight Games:
SEARCH JACK'S POCKETS
Posted by Matt Drake at 2:22 PM

another wonderful review that had me laughing out loud, thanks