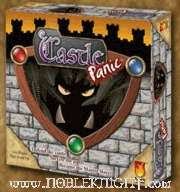 Sometimes I get this weird vibe where everyone else loves a game and argues over whether it is awesome or just bitchin', and then I play it and wonder what I missed. It mostly happens with really popular games - for example, I would rather take a nap than play Puerto Rico (I always wonder about people who are extreme in their 'would rather' examples, like when someone says, 'I would rather shove razor blades into my buttcheeks than play that game'. There is no game I would not play if it meant I avoided painful scarring on my ass, unless the game actually involved sticking razor blades in your buttocks). I have heard a lot of people who said how much fun it was to play Castle Panic, and then I played it, and thought, 'why do people like this?' Just to make sure, I played it again, but it didn't get any better.

It seems like it should be fun. It's a cooperative game where a bunch of monsters attack a castle and you team up with your friends to kill them. Body count plus cooperative - usually a winner for me. But I would rather cook dinner and watch reruns of Battlestar Galactica than play Castle Panic (in all fairness, I really like Battlestar Galactica).

The mechanics are simple and easy enough to understand. The monsters start at the outside ring, in either the blue, red or green wedges. As they move, they have to go through the archer ring, then the knight ring, then the swordsman ring. If you have cards that match the wedge and ring where the monsters are hiding out, you can whack them with something sharp. So if there's a goblin in the blue knight area, you can play a blue knight card and the invader will come down with a bad case of sword poisoning.

If the monsters get to your walls in the middle of the circle, they will eat them. These are very hungry orcs, you see, but walls are not good for you, so eating walls will hurt the monsters. Behind the wall are your towers, and the monsters will eat those, too, and they will get very bad stomach cramps and have to take a Midol. But if enough monsters eat enough of your towers, you all lose and have to find something you would rather do, like rearrange the living room furniture and sweep up the cat hair under the sofa.

The art is nice. The goblins and trolls and orcs in Castle Panic all look very much intent on smashing your walls and eating them. The cards are a little cheap, but the art on those is nice, too. The creators put a good amount of work into making the game look good, but sadly, it's not much more fun than say, walking your dog when it's kind of hot outside.

The reason I don't think Castle Panic is fun is because it doesn't feel like much of the game is up to me. The right move is generally abundantly obvious, and requires very little arguing over which card to play. If you have the right card, you play it. If you don't, the monster will eat your wall and then have a very uncomfortable bathroom visit. When your choice comes down to 'do something' or 'do nothing', it's not a particularly compelling game.

I know that a lot of people like Castle Panic. I don't, but I know someone does. Hell, they can have mine. I would rather fold the laundry and put up the dishes. I don't hate it, which is why I chose rather pedestrian chores as my 'would rather' comparisons. If it came down to a choice between playing Castle Panic and cutting my butt with sharp blades, I would choose the game every time. Until it does get that dire, however, I think I'll pass.

Pros:
Nice art
Not hard to play at all
Not very fun, but at least it ends quick

Cons:
Choices are not hard - if you have the right card, you'll play it
Not all that much fun

Maybe I'm just used to games that actually make me feel like I did something. Maybe you'll love Castle Panic. Lots of other people do. You can find it here, at Noble Knight Games:
NOT AS FUN AS WEEDING THE GARDEN
Posted by Matt Drake at 2:16 PM

Yeah, I didn't like this either. Bored. I traded it away to a guy who has a very young son. Luckily, they had a good time with it.

That box art reminds me of your dungeon dice tower. I still get plenty of use out of my custom waterfall dice tower.

Great job with the blog.

"The reason I don't think Castle Panic is fun is because it doesn't feel like much of the game is up to me. The right move is generally abundantly obvious"

This is one of the reasons why I abhor Castle Ravenloft so very much.

Send me your copy, Matt. The kids miss mine.

If you play it with the Slayer variant, then it becomes much more interesting. You keep some of your own cards even though it may hurt the group, so that you can score the most kills.

Try it like that, unless you're watching BSG reruns or walking the dog in the heat. You may like it almost as much. :)