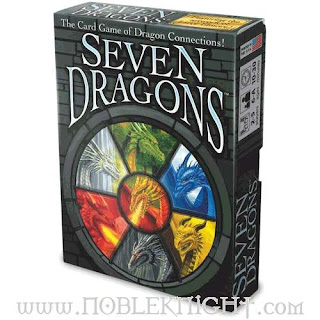 How much do you have to change a game to make it a new game? I mean, assuming you're not Reiner Knizia - he just changes the art and sells the same game two or three times. But I mean if you're someone else, someone who is not in a position to mastermind an overthrow of the German government, how many new rules do you have to put into a game to make it something different?

If you're Looney Labs, the answer is one. One thing changes, and you've got a new game. Make one new rules, swap out the art and just like that, you've got a new game. That's what they did with Aquarius when they made it into Seven Dragons. I really like Aquarius, though, so I'm just fine with reskinning it and calling it something else.

Both games work the same way. You've got a bunch of cards showing five different pictures, and you have to chain together seven of them. Some cards show just one picture, some have up to four different pictures, and when you match them up, you have to put matching pictures next to each other. With me so far? I hope so, because I'm kind of getting lost. I probably should not drink vodka when I'm on vicodin.

Anyway, in Aquarius, the pictures are elements. In Seven Dragons, they're dragons. That's probably where they got the name. The dragons are all recycled Larry Elmore art, which means they're really cool. And unlike other games using outdated art, these don't look like they just jumped out of a time machine from 1983. These look cool, because dragons don't wear leg warmers or get giant perms.

Just like in Aquarius, there are also actions you can take that mix up the game. You can switch goals, shuffle up your hands, and otherwise screw up the natural order of things and hose your friends who thought they were about to win. These are cool, and add the missing piece to the game. Without these actions, the game would be pretty boring.

But I did mention that Seven Dragons has a new thing, right? And the new thing is the silver dragon. This color-changing dragon matches the color of whatever action card was last played, which is unlike Aquarius, where the start card is always wild. This adds a little more interesting play, because you might play an action just to change the color of the silver dragon. So that's a little more interesting.

I really like both Aquarius and Seven Dragons. I have to be honest, though, if you have one, you don't need the other. If you really like the chameleon start card, you can get a card from Looney Labs that does that. Surprisingly, it's a dragon. Shocking, I know. And it only costs a buck, so it's even affordable.

Seven Dragons is not a particularly complex game. It's not hard to play. It's not full of strategic counterplays and tactical maneuvers. It doesn't have player elimination or area control or deck building. It's just light and fun. It will make you think enough to keep you interested, but you could still play it with a five-year-old and have fun (except that then you're playing with a five-year-old, so it may not be fun, after all). I love the art, and while I can't see a reason to own Seven Dragons if you already have Aquarius, I definitely think you should own one of them. Both are a breezy good time. They have a lot in common, primarily because they are actually the same game.

Cons:
Just like Aquarius, which means you don't need them both

If you like easy-to-play games that you can finish in fifteen minutes, you should go over to Noble Knight Games and get Seven Dragons:
GET SEVEN DRAGONS

And if you like easy-to-play games that you can finish in fifteen minutes and that have a VW bus, you should go over to Noble Knight Games and get Aquarius:
GET SEVEN DRAGONS, BUT WITH A VW BUS

But only get one of them.
Posted by Matt Drake at 2:14 PM