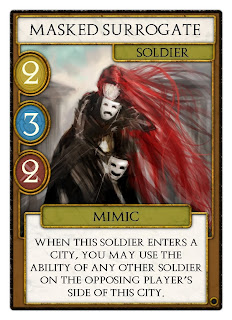 That seriously kick-ass art is not from Omen, though. It's from Shattered Aegis, which is the first expansion for Omen. Shattered Aegis comes from a Greek word that means, 'broken clavicle', an injury usually sustained by the ancient Greeks while they were skating empty pools. These predecessors of the X Games probably should not have been skating bare naked. Helmets, at least.

Shattered Aegis adds a bunch of new units, all illustrated by the same seriously kick-ass artist who did the first game. You can use them in the normal rules that come with Omen, but there are also three variant games you can play if you're feeling adventurous. If you're really feeling adventurous, you can trying skating a pool naked. I don't recommend it, though apparently the Greeks thought it was entertaining enough that they came up with a word for what happened when you bailed at the top of a frontside alley-oop.

The first new game mode is called Grand Melee, and allows four players to draft their decks of ten units to play against everyone else. You play until someone wins twice. Then there's pure deck building, where each player build his deck to play against an opponent who also builds a deck. If you want to do that, you need two copies of Omen and Shattered Collarbone. The last mode is Test of Skill, which gives each player an identical deck of 40 units.

There's also a new status effect in Shattered Aegis, called Enrage, which happens when the other player bails an axle stall on the diving board and then you nail it. It turns non-beast units into beast units because they're so infuriated at your prodigious skating ability. Those Greeks were serious about their skating.

Shattered Aegis is not out yet. Preorders for the game will open up in a few days, at the first of August. This is just a preview, and I expect to be giving the game an actual review in a few weeks. In the meantime, if you want to get on the preorder bandwagon, keep an eye on the Small Box site: