Board Game Review - Mansions of Madness 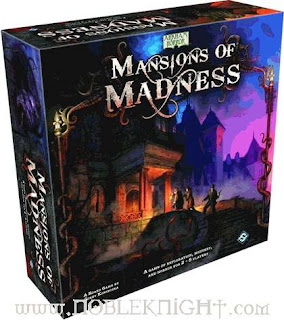 There are lots of kinds of games. There are pure mental challenges with bright colors and chunky wooden pieces, but no story at all. There are athletic games that require you to be coordinated and hopefully not very fat. There are cooperative games and card games and dice games. But my favorite games are the ones that tell a story, which is why I have fallen hopelessly in love with Mansions of Madness.

The ironic thing is that I don't really care for the Cthulhu stuff. Lovecraft was a hack. He was imaginative, but he had all the readability of a high school geography textbook, and he made up names for his bad guys by randomly combining consonants and vowels. I can picture these super-villainous denizens of bizarre worlds rising up from their summoning rituals and saying, 'Now feel the wrath of shub… shoobagoober… sheber… well, me!'

But I love a good story, and even more, I love being part of that good story, and that's where Mansions of Madness rocks my face off. A group of gritty investigators will go into a haunted mansion and discover all manner of badness, and one player will be the bad guy who attacks them with zombies and cultists and monsters that look like they were built out of gummy worms. The investigators will go from room to room, exploring and looking for clues, while the bad guy player will use all the powers at his disposal to trap them in the house or eat them or turn them into gibbering lunatics by making them watch hour after hour of Hannah Montana reruns.

When you read the rules for Mansions of Madness, it will at first remind you of Descent or Doom. The bad guy gets threat tokens every turn that he can spend on his nefarious plans, and there are several pages describing combat. Fortunately, however, this is not Descent. For one thing, you don't have to stop every five minutes to figure out what a monster's special power means. For another, there is a lot more for the investigators to do than shoot things.

The funny thing about Mansions of Madness is that while there are 25 pages of rather dense rules and a set-up time that can take 45 minutes, the game is really quite easy to play. Most of the rules describe special cases, like how to defeat the lock on the mysterious suitcase or how to turn on the lights after a monster uses the wires as dental floss. Investigators can block doors to keep monsters on the other side, or use the axe to smash the lock on a door, or sprint madly for the safety of the walk-in refrigerator (where they will unfortunately be eaten by leftover Spam, which as we all know, is made from the meat that the packing plant decides can't be put into hot dogs, and Cthulhu loves to animate tongue meat).

Part of the beauty of the game comes from the meticulous manner in which stories are built. There's enough flavor text in here to choke Gordon Ramsey. Cards describe events as they occur in the house, and those descriptions often provide clues telling the investigators where to search next. Time is not on their side - the bad guy will just keep throwing badness at the heroes, and there's a built-in timer that will eventually result in a loss for everyone playing the game. Heroes will have to hustle to find keys, unlock puzzle boxes, and explore dank basements before the clock strikes two and the house collapses under the weight of its own evilness. Monsters are obstacles that the villain uses to slow and disable the investigators, as opposed to many dungeon-crawl style games, where killing the monsters is why the heroes got out of bed.

A series of cards placed before the game begin will allow the tale to unfold. The heroes might be investigating a missing businessman in his very creepy house, or they might be searching a monastery that has been taken over by a cult. As time progresses, events get more dire, and if the heroes can't uncover the clues that tell them how they win the game, they might just find themselves staying for dinner - as the main course.


The evil keeper is full of dirty tricks, too. He has a deck of trauma cards that he can use to make bad things worse, so when a dog shaped like a tapeworm manages to bite the hero on the leg, the keeper can play a card that maims the investigator and makes him move really slow for a while. The bad guy also gets a deck of mythos cards, and these are even more fun and delightfully nasty. Whenever he has a few extra threat tokens, he can make the lights turn off or make paintings fly off the wall to smack the heroes in the side of the head like a scene from Scooby Doo. These mythos cards are hilariously fun to use, though the investigators might not be as excited about them when the two-gun gumshoe goes raving mad from sheer terror as unseen voices call his name and remind him that he forgot to turn off the iron.

Plus all kinds of dark secrets are hidden in the house. As the investigators hunt for clues, they'll uncover bodies that rise up and chase them, journal entries penned by madmen, and dark rituals that will turn them against each other. Their ultimate goal is to uncover enough clues to figure out what they need to do to defeat the evil that lurks in the darkness, but along the way they might take the time out to search empty rooms for weapons or spells or collectible Hot Wheels cars. Waste too much time, though, and the keeper will have time to ramp up, and you might find yourself facing more grief than you can handle.

Mansions of Madness is so much fun, I wish I didn't have any complaints. Unfortunately, it's a Fantasy Flight game, and that means there are problems. I'm beginning to think Fantasy Flight is practicing branding to identify themselves with a handful of very specific errors. For one thing, there are approximately 725,000 tiny pieces of cardboard in the box (once you finish punching them all out, which will take you slightly less than one lunar year). That's a pain in the ass. Here's a suggestion for future game designers - more pieces does not mean a better game. Sometimes it just means there's a lot more to clean up.

I can get past a whole mess of pieces, but I really do wish Fantasy Flight didn't absolutely require an updated FAQ every time they release a game. Sometimes these FAQs come out before the game even hits stores, because it takes almost no time to start finding all the mistakes and oversights in the rules. In this case, there's a little piece of paper right in the box that describes a number of errors they made before they sent the rules to print. There are even updated cards that replace cards they got wrong the first time. And now they're on a second printing, and they fixed the mistakes from the first version. The second version, however, has all new mistakes.

So if you like story games that aren't hard to play, here's what you need to do:

1) Schedule a day off work that you can spend punching the game, organizing the pieces and learning the rules.
2) Read up on the FAQ and find out what mistakes other people have made, so that when you play, you can make completely different mistakes.

It's a pain in the ass to keep up with Fantasy Flight's miserable quality control, but when you play Mansions of Madness, it will be totally worth the effort. This game is capital F U N fun. It's equal parts competitive free-for-all and story-telling experience, and when you're done, you'll look over the gigantic pile of miniatures and room tiles and cards and teeny tiny cardboard bits and say, 'now, which of you unlucky bastards has to put this away?'

Pros:
Exciting story-telling experience
Easy to play in spite of the 25-page rulebook
An amazing amount of theme and flavor
Simply remarkable components

Cons:
Mistakes will send you to the Internet to see what you're doing wrong
Rules will consume a couple hours of your life
Humongous number of little cardboard pieces

I can't wait to play Mansions of Madness again. This could be the template for all manner of great story-telling games. You really should run over to Noble Knight Games and pick up a copy:
GO CRAZY
Posted by Matt Drake at 2:20 PM

MD,
Another great review! I agree with you on almost all accounts ( I actually like the pastiche of Lovecraft, and his obtuse writing style).
Anyway, I did three things to help my little group of beer drinkers (aka gaming buddies) get into the spirit.
1) I printed game aids from Headless Hollow. Each player has their own 3 page set, but they really just need the 1 and 3 page.
2) I set up the board before they show up. I know it cuts down time if they set up the board, but I find their participation makes them more aware of the mansions' twists and turns. To that end, once the board is set up - I cover each tile with black cardstock. Yeah, it took another hour to cut out the pieces. But after hours and hours of punching and reading and painting - what's another 60 minutes?
3) I painted the minis. It took forever, but damn. They are nice sculpts and fun to paint. I had to make a d20 SAN roll each time I painted a Hound. They may not be as nice as Space Hulk 3rd Ed., but they are nice. I look forward to the sculpts in their first big box expansion.
Keep rolling man!

Thanks for the review, I thoght of buying it for some time now and you pushed me over the edge ;-)
The main reason I waited is because I hate, hate, hate the rule books. Its not even the mistakes or the legth (their games are complicated, thats OK), but the waz they are written: They start with such detail account of cards, where you dont know what the cards are for. If you know what the game is about (I dont mean the story, I mean what you have to DO) before youre halfway through the rulebook you are a better man than I. And a lot of things are only understood once you play the game, because some mechanics are in the cards and there is no indication in the rules what they can do (we were halfway through a game of Battklestar Galactica before we found out how the civil ships come backon the board after a jump)

"remind him that he forgot to turn off the iron." was pretty much the point at which I could not keep from laughing. My co-workers now KNOW that I am insane...