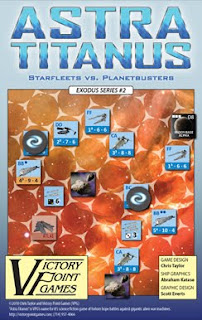 Last week, I reviewed the ridiculously fun Battleship Galaxies. So it's almost fitting that this week, I should review Astra Titanus, another space battle game. And it's a great time for it because it allows me to compare and contrast the Hasbro big box space extravaganza with the Victory Point plastic bag full of cardstock.

The biggest elephant in the room, of course, is that Astra Titanus comes in an oversized sandwich bag, and thus does not have space for actual model spaceships. Model spaceships would have made the game a heck of a lot more awesome, but they would not have fit in the bag unless they were very, very small, and that would effectively eliminate their cool factor. The spaceships in Astra Titanus are printed on cardboard sheets so you can punch them out and have square ships. Not as awesome as it sounds. And I doubt it sounds awesome.

Battleship Galaxies is a two-player game of asymmetrical but balanced enemy forces. Astra Titanus is a one-player game where you control a huge fleet of space ships as they head out to fight the Titan, a super-huge world-killer ship that will blow up your guys left and right as it heads toward your moon bases. It's not balanced at all, but it's not supposed to be, so that's OK.

The Titan ships (they're different, depending on the scenario you choose) are controlled by a deck of cards, so every turn that they move, you draw one and figure out where the bad guy goes. Then you can move your ships in and try to blast the big bastard, and then if he's still alive (and he will be alive, because he's a freaking monster), he will blow up a bunch of your ships. It's the classic quantity versus quality scenario.

There are a few things that make this a pretty decent solo game. For starters, when you move your ships, you won't be able to use them that turn, because they're all in hyperspace or portable wormholes or Narnia. They can't be shot, they can't fire, and they can't do anything until they climb back out of the wardrobe. So you have to plan pretty well, because if you keep having to move your ships, you'll never be able to shoot the bad guy.

Another thing that makes this interesting is the ability to combine fire. You'll have to balance your willingness to make a lot of separate attacks with your ability to make just one or two strong attacks. Since even the weakest titan is going to require dozens of hits before it takes a dirt nap, you'll need to hit it fast. It advances every turn (slowing down as you blow up its interstellar space engines), so it helps to place your ships so that the maximum number of ships will have a shot at it. Of course, since the titan moves before you can shoot, you have to place your ships very carefully and hope the titan doesn't make a crazy zig-zag and run right into your heavy carrier, which will smash it to pieces without making a dent in the big bruiser.

If Astra Titanus were a big-box board game, and if it came with plastic spaceships and a big sturdy hex map, I think it would sell pretty damned well. It's a little unfortunate that you can only play it solo, because it could be fun against an opponent, but it's still a very interesting game. There's not much planning or long-term strategy, but your tactical decisions have a profound impact on your ability to destroy the titan before he blows up your moon base and Obi Wan feels a disturbance in the force.

Sadly, Astra Titanus does not come with a sturdy board or plastic spaceships. It comes with cardboard squares and circles and a hex map printed on a sheet of cardstock, so that I had to put the map under glass if I wanted to move my ships around, because the cardstock kept flipping up and making all my destroyers slide into the battle cruisers. I also got my chocolate into my peanut butter. It was a mess.

I played several scenarios of Astra Titanus when I was testing it, and while I didn't win them all, I did enjoy the game. I don't think I'm likely to play it again, though. It's not that it's a complete dud, exactly. It's more the fact that I've got Battleship Galaxies, and it's way more fun, and I can play with two players, and it actually does have plastic spaceships and a sturdy space map. I don't play solo games very often, because I have a television and a Netflix account.

So, in summary, Astra Titanus is not Battleship Galaxies, and will not be replacing it any time soon. It isn't bad, if you want to play a game all by yourself using ugly cardboard squares on a flimsy map. I don't, though.

1 player who does not have a television or Netflix account

Pros:
Clever tactical options
Plays fast and makes sense
Intuitive and exciting
Challenging, which is impressive in a solo game

Cons:
Solo only
Cardboard squares and a flimsy map

If you are a shut-in with no access to actual entertainment, you can go here and get a copy of Astra Titanus:
I'M SORRY YOU DON'T HAVE ANY FRIENDS
Posted by Matt Drake at 12:13 PM

I really like your VPG reviews, Matt. I trust your opinion and it's nice to get a second opinion on a VPG release from someone I've know on the internet for some time.

Astra Titanus is one of Chris Taylor's best VPG game. It's a bit tedious to set up and play, stacking missiles, placing and removing wormhole tokens and relocating tons of TDF ships, but it does make for a great, portable solitaire game. One of my favorite games of 2010.

I look forward to more of you VPG reviews. Thanks for writing them.