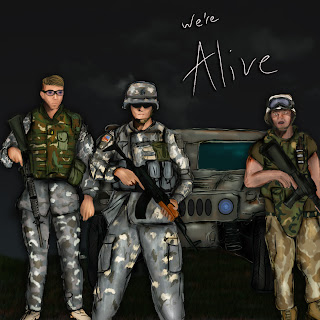 I had a game all reviewed and ready to go. It was a good one, too. It's classic nerd excellence. But I changed my mind about running it tonight, because I just wasn't feeling it. And I wasn't feeling it because I found something way better, and I feel like everyone should know about it, right now.

Let's say you're a zombie. OK, that's not very likely, so instead, let's say you're a fan of zombie entertainment. I know I am, so when I heard about this wacky Internet radio show called We're Alive, I was intrigued. It's an ongoing story about a zombie apocalypse, available in 15-25 minute segments, and going back more than a year. As a weak-willed drone who will check out nearly anything zombie-related, I was practically obligated to check it out.

I was skeptical, to be honest. A radio show? That sounds awesome - if it was 1943. But ever since this wild new invention called television, people just don't really produce radio shows with any serious regularity. Probably because television is inherently better. You can tell me all about how classic radio shows were the pinnacle of entertainment, but I would call you a dope and then hand you a remote, because you've obviously never seen any TV.

But then I remembered that I have a pretty crappy commute to and from the soul-eating horror of my workplace, so I thought, 'hey, I can listen to this almost-certainly-boring podcast on my crappy commute to my soul-sucking workplace.' I downloaded the first couple episodes and gave it a spin on the way to work. And then I was hooked.

It turns out, We're Alive is just freaking brilliant. The story takes about two minutes before it grabs you by your nostrils and forces you to listen to every word. The characters are believable, the story is intense, and the acting is... well, OK, the acting often blows.

The main character, Micheal, is pretty good. He's easy to believe and authentic, whether he's calm and collected or irate and irrational. Lizzie is great, too, and I may have a crush on the girl who voices the tough chef-turned-master-at-arms named Riley.

But for every excellent actor in the cast, there's one who needs to go back to tenth-grade drama class. My favorite guy, the US Army dufus named Saul, is voice-acted by a man who apparently forgets his lines whenever he has more than three words in a row. It's a shame, because Saul's my favorite - I love his silly half-Mexican accent, and the character himself is hilarious and tough as brass nails. If only he wouldn't pause every three lines to see if he can pick up where he lost his place. And Burt, the trigger-happy old man, is voiced by a guy who is doing his worst Clint Eastwood impression during the whole show. He's supposed to sound old and tough, but he actually sounds like a fourteen-year-old kid who won't quit saying, 'Go ahead, make my day.'

So the acting is a little weak in places, but it says something about the quality of the story when the poor acting doesn't put me off at all. Like, ever. I'm not saying I hope they find more bad actors, or anything, but I am saying that I am wildly entertained and actually disappointed when I get home from work (it goes without saying that I am disappointed when I arrive at the office).

It's not just the continuing saga that has me glued to my noise-canceling earphones, either. The characters develop and grow. The story feels like it has a goal, like it's going somewhere, like there's an ultimate plan to the whole thing. As an added bonus, it doesn't fall into that stupid, worn-out cliche where they try to tell us that we're the real monsters. In We're Alive, the monsters are the real monsters, and the show focuses on the people as they triumph and fail in the face of overwhelmingly impossible odds. It's fun and exciting and incredibly entertaining. It's better than 90% of the boring retreads that make it to television.

I'm not even a third of the way through the episodes they've recorded so far, and I can't wait to see how it all winds up. I just hope they take a really long time getting there, because unless they pull a Zombie jumping over a shark, I don't see how this show could go wrong (though I sure hope they don't kill Saul. He really is very entertaining).

But there's a problem. And the problem is, this show should be making tons of money, and from what I've heard, they have fewer hits a day than I do. Let me tell you something, when a show this spectacular has less traffic than my hole-in-the-wall, game-review-black-hole, cobwebbed corner of the Internet, the universe is obviously badly damaged. We need to repair it, right away.

You can help. Go to the We're Alive website and check out a couple episodes. If you don't have the patience to download every episode, one at a time, you can buy the entire first season on CD for less than you would pay for even a low-rent board game. There are roughly 23 hours of rock-solid entertainment out there right now, and so if you're a fan of quality entertainment, you should hustle over there and check it out.

Besides, television might be better than radio, but can you drag your 42-inch plasma on the bus? No, you can't. Where would you plug it in? And how are you going to watch it if you're holding it? Do you think that smelly bum will hold it for you? Because he will, but he won't give it back when your show is over. He will sell it and buy some Boone's Farm. He would love to watch some shows, but his refrigerator box doesn't get cable.

I would keep raving about We're Alive, but as I'm writing this, the final episode just downloaded to my phone. I'm going to go downstairs, plug in the earphones, and listen to We're Alive until it's time to go to bed. And then, probably just one more show after that.

Seriously, get over to this site right now:
http://www.zombiepodcast.com/The_Zombie_Podcast/WereAliveMain.html
Posted by Matt Drake at 6:48 PM

Good catch. I'm listening to the 2nd chunk of the first chapter, and already referred a link to my brother. :D

Thanks for the heads up on this podcast. I'm really enjoying it at work today!

FYI the Twilight Zone has produced audio dramas like this also, and they're also a lot of fun.

Thanks for this, I love listening to radio plays while walking my dogs (ARTC for one) and zombies just makes my walk better.

Thanks for the info on this! I love the old radio shows and you can get them at www.radioclassics.com where I have gotten a TON of stuff. Not much zombie stuff, but a lot of great old horror and suspense stuff on there, too!

This is a great review. I'm an admin from the forums, and someone posted about this review. I'm glad you took the time to write this. Come check out the forums sometime. We constantly have contests, and we even have a podcast about We're Alive (We're Not Dead). Come check it out, it's a home away from a zombie defense tower home.