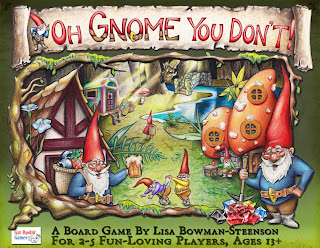 I don't try to hide the fact that I'm a sucker for a good theme. It's more fun to play a game when it feels like you're doing something else. That's also why I'm a Star Wars nerd - I want to fly spaceships around a planet far, far away. It's probably also why I can't stand romantic comedies. You're not escaping anything if you wind up pretending that you're a dorky kid with a crappy office job who falls for the cute chick from the typing pool, unless you're an alien who has spent his entire life pining after the princess while you fight bad guys with electric glow sticks.

But as much as I like a theme, a game still has to be a good game. A reader asked me to review Oh Gnome You Don't, which lets you all be money-grubbing gnomes who race each other to through the forest and try to get paid. Along the way, you give each other wedgies and steal money. That sounds like a fun idea, but unfortunately, the game is what you get your kids to play after they outgrow Candyland.

Now, I should point out that there's a hell of a lot more to Oh Gnome You Don't than there is to Candyland. Sure, it's a basic roll-and-move race to the finish line, but you also have cards you can play, and you can stop in at various gnome businesses along the way to trade your blueberries and small mice for gems. Plus you can boot the other gnomes in the ass and steal their crap, and you don't have to win the race to win the game. That's way better than Candyland.

And the art is outrageously fantastic. You'll fall in love with the silly little bearded dwarfs and the pissed-off squirrels. You'll laugh at the funny ways that gnomes like to hurt each other. Everything visual about Oh Gnome You Don't begs to be played, if only so that you have an excuse to flip through the cards and look closely at the beautifully detailed board.

Unfortunately, while many of the pieces are here to make an impressive game, it falls short of being really interesting because there's just not enough to do. You roll a die, move that far, and then play a card. If you have goods to sell, you'll stop in and sell them. If you have cards that can hurt your opponents, you'll play them because otherwise, what's the point?

In other words, while the game has more charm than a Hot Topic tennis bracelet, it's just not that much fun to play. Instead of being a light and cute addition to a fun game, the art and theme end up saving an otherwise slightly boring game. And there are too many games in the world for me to play a dull game just because the picture of the gnome yanking another gnome's drawers up his ass crack makes me giggle.

Then again, if you have kids who want to play but lack the mental agility to challenge you at your grown-up games, Oh Gnome You Don't might be exactly what you need. You won't want this game if you always play with other adults, but if your regular group consists of you, your wife and your three dopey grade-schoolers, you'll probably find yourself glad you've got this one in the closet.

Because if you don't, your kids will probably make you play Candyland again.

Cons:
Not enough decisions to make an interesting game

If you need a game to play with kids, you could do a lot worse than Oh Gnome You Don't, and you can get it right from Gut-Bustin' Games:
GIVE A GNOME A WEDGIE
Posted by Matt Drake at 2:32 PM

Thanks for giving my girlfriend and I a late night. . . . we were up giggling at your review unable to sleep!

It cannot succeed as a matter of fact, that's what I suppose.

isn't the phrase "oh no you didn't"? So shouldn't the name of the game be "oh gnome you didn't"?

As opposed to 'Oh no you don't' which isn't a phrase DrewL?