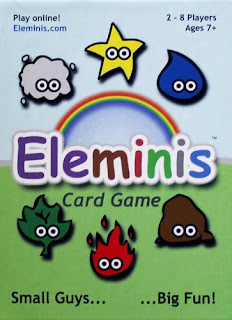 I'm going to try a word association exercise. I'll say a word, and then you can say the first thing that comes to your mind. Don't bother saying the word out loud, though. I can't hear you, and your co-workers will think you've been huffing the canned air.

Ready? The word is 'Eleminis.'

Ha! Got you, didn't I? You couldn't think of anything! Probably because that's not a word. That's like two words, only they're all scrambled and nonsensical. Word association is cool, right?

So instead of continuing this rather stupid exercise (which is even more stupid since I can't actually hear you, and you might have come up with something awesome and I just assumed you couldn't think of something, which is not really fair, but I already did it and I don't mean to take it back), I'll just tell you what 'Eleminis' means.

Hold on to your seats, because this may be a shock - it's a game. Yep, I know that's weird. You're at a website about games, reading an article titled, 'Card Game Review - Eleminis', and then I go and spring it on you that Eleminis is a game. I should probably try to be more obvious next time.

But there's something else, because eleminis are also very short skirts worn by grade-school kids (mostly girls). No, wait, that's not right, and would make a very awkward game that might require you to register with the city. No, an elemini is a very small pachyderm. No! It's not! I could do this all day.

Eleminis are actually tiny elemental characters. That's actually true this time. These cutesy little goobers are all over the cards for the game of the same name, and you win if you can get all five of them. Yes, there are five. There are the four traditional elements, which are fire, water, air and earth, but then there's the stand-in extra that got drafted at the last minute because the other four wanted to start a basketball team. The last element, in case you're curious, is vegetables. Well, OK, the game calls it plant, but calling a little guy 'plant' is nowhere near as interesting as calling him 'Rutabaga.'

Every elemini in this game is a brawler capable of beating the piss out of two other eleminis. For example, Fire can throw a beating on Air and Turnip Greens. Then Air can get all pissed and go take out his frustrations on Water and Earth, and then both of them go kick Fire in the groin for pissing off Air in the first place. This relationship is important, because it's how you play.

You only have five slots in front of you. So if you wanted to put a sixth card in front of you, well, you can't. You only have five. And to win, you need each slot to have a different elemini in it. Every turn, you draw one card, and you have to play it. If it's good for you, you probably want to play it on yourself. If it sucks, you may want to give it to someone else. And any time an elemini can beat up a different one, you can swap the bully out for the victim.

There are also a couple other guys in the game. They get bussed in from the projects. One is Star, and the other is Trash. Star has emotional problems, deep-seated scarring that makes him able to beat up anyone, anywhere, for any reason. It's sad, really, but it is this power that makes him also a great stand-in for any other elemini. So if the school play starts and Air isn't there, but all the other guys are, Star can stand in. Hell, if you want, you can forget the other nerds completely and just have five Stars.

Then there's Trash. He stinks. His mother doesn't bathe him often enough, and the other eleminis won't hang out with him on the playground. He just sits in one of the spots and keeps the other little dudes from coming in, which means that you can't win the game if he's sitting there. You have to get him to leave.

And that's why you have action cards. These cards let you swap eleminis, steal them from other players, and even discard them right out of the game (as long as you bring a tarp and a shovel. That body isn't going to bury itself, unless you had the foresight to make the poor guy dig his own grave before you killed him).

So far, this is a great example of seriously disturbing playground politics. What it is not is a very interesting game. You can only play one card on your turn, so it's not like there's any hand management. You draw a card and you play it. It's pretty obvious whether you should give it to yourself or hit someone else with it. And that is not exactly the foundation of rewarding game play.

However, a few factors should be considered before you simply bury Eleminis in a shallow grave next to Cucumber and Fire. For starters, the art is very kid-friendly. Like, if your kid is into Veggie Tales, he's going to think the art in Eleminis is a little too cutesy. And the rules are stupid easy to learn. You could teach this game to a four-year-old - which was probably the general idea.

If I were a grade-school teacher (and I had not yet been summarily dismissed, possibly held without bail pending trial), I would probably keep a copy of Eleminis in the cupboard. You can play it with a gaggle of kids, and anybody under ten years old might really enjoy the chance to play a game instead of learning multiplication tables or the alphabet. The cards have simple art, and each one has a really big word right on the card describing what it is (in case you couldn't look at the raindrop and tell that it's water). You might be helping kindergartners learn how to read! Or in my case, I could be teaching kindergartners how to run interference so I could steal from the bookmobile.

I don't think very many adults would enjoy playing Eleminis. It's got all the depth of a linen tablecloth. I'm not even sure smart children would enjoy it. But a handful of slobbering first-graders might actually beg their teacher for the chance to break out the cards, especially if their teacher tells them that Shrub can beat Air or Water in a cage match.

Cons:
Not very interesting for anyone who can read the nutrition label on a cereal box

Do you want to know more about Eleminis? No? Me neither. But in case you teach second grade, or are a nanny for some kids with Down's Syndrome, you can get Eleminis here:
http://www.eleminis.com/
Posted by Matt Drake at 2:26 PM

Someone hates the game so much but wrote quite alot..obviously this not a review but someone angry at the gaming world! LOL @ you Mark

I didn't hate the game so much. I just think it's a game for small children. I'm not a small child, so it didn't impress me.

And my name is Matt. Not Mark.

Its a game for small kids but I like this game.