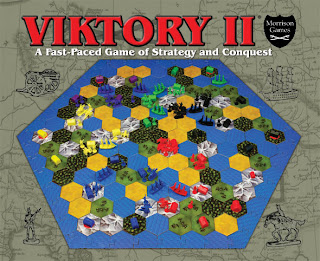 Everybody knows the saying that good things come in small packages. Whether or not it's true depends entirely on what's inside the package, of course - if you're comparing a package containing a diamond ring against a crate full of urine-stained packing peanuts, it's true, but box up a couple pounds of cat litter and put it next to a package with a car inside, and the saying goes right out the window.

Slightly less known is the saying that goes, 'good things come in ugly packages.' In fact, I may have just made that up. Wait… yep, I did. But I made it up because in at least this particular case, it's absolutely true.

Viktory II is an ugly game. The box is bland and unattractive. It's gray, with a photograph of the entire game board all over the front of the box. Even the pieces inside the box are boring. They look like they've all been stolen out of Monopoly and Risk, except for the hex tiles, which depict various terrain types, like mountains (gray with streaks), plains (flat green with cotton balls), and grasslands (yellow. Just yellow). Looking at the rules and the pieces in the box, you may be inclined to decide that Viktory II is a bad game.

But that's where the saying comes in. Viktory II is one of the most innovative, interesting, and tactically challenging world domination games you'll ever play, which surprised the hell out of me because the box is so dismal. The board isn't the least bit sexy, but the game will tax your brain and blow your mind.

The reason the board is all hexes is because it starts upside down, and you explore as you play. It's critical to unearth new land and build new towns, because the only way you get more soldiers is to have settlements to support them. You can't just hide in Australia and build every turn until you're sitting on top of 75 troops when everyone else has three, because your troops max out at what you can support.

Another fascinating thing about Viktory II is how you get better troops. Turn a town into a city, and it gets you more warriors - but the type of warrior you get depends on the terrain. Mountains support artillery, and forests support boats. If you don't control a city in a forest, you just don't get any boats. Sorry. No boats for you.

Know what else is awesome? Everything. Combat is all about diversity - you get more dice for having different types of attackers, so 5 infantry divisions will roll fewer dice than one horse and one cannon. The infantry guys will take a while to kill, because there are so many more of them, but the horses and guns will kick their asses all day long, especially if the smaller force is defending in a city (that gets you more dice, too).

The sum of all these fascinating new directions for big-battle throw-downs is a game where nearly any decision is important, and a three-hour game will pass you by so fast that you don't even know the day is gone until your stomach starts rumbling. Viktory II demands tactical brilliance and sound strategy, and no small amount of looking at the whole board even if you're tied up against one enemy. You can't afford to make mistakes unless you can count on your opponents to do the same, which leaves the best players rising to the top - unless their opponents are really, really lucky.

From reinforcements to movement, exploration to building, everything about Viktory II takes all the rules you think you know about large-scale combat games and turns them on their heads. The rules are not really intuitive until you've played a few turns, because they're not like anything you've seen before. Everything works different - but in this case, that means everything works better. Viktory II is just a fantastic game, even if the box does look like a cat barfed on it and you tried to clean it up with a Kleenex.

If I had my way, some serious publisher with an eye for talent would buy Viktory II from its creator and turn it into a blockbuster. I could see Asmodee or Fantasy Flight turning this game into an award-winning good time. Skin it out with a slick theme and some dead-sexy art, include a couple pounds of sweet plastic people, and you've got a game that would shame every other wannabe world-conquest game on the market.

They probably won't. But that's OK, because you can still buy Viktory II from the creator, and if you're a fan of this kind of game, you should. Never mind how ugly it is. Just play it. You'll love it.

Pros:
Scales well with a variable-sized map
Strategy and tactics in equal measures - and lots of both
Innovative and unlike anything you've played before
Fast turns that still feel like you did something

I've played a lot of world conquest games, and Viktory II just shot right up the charts. Like, top five of all time. You can get it right here:
http://www.viktorygame.com/#order
Posted by Matt Drake at 4:39 PM

It tends towards stalemates though.

I've not had a stalemate whilst playing Viktory II.

Yeah, we didn't get any stalemate at all. There were a couple turns when two of us were hammering over the same land, and then one of us won, and it was all over but the crying.

Ooh EIGHT players. I think this ugly turd gets put on my shopping list.

got me interested, thanks for sharing, a little longer game then I like, but it sure sounds great.

How would you rate this in comparison to Nexus Ops?

I realize neither are the same game and only have superficial resemblance to each other, but it would appear that they are similar enough to remark on.

I have been eyeballing this for quite a long time now but am not sure if this is a game for my group that likes a lighter take on wargames.