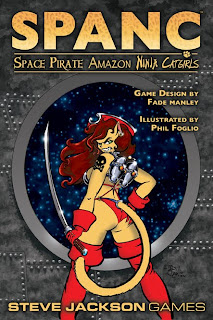 If you are one of those people, you are going to LOVE this review. Because SPANC is one of the most God-awful games I have ever played, and I intend to spend this entire review finding ways to mock the game and its creators, out of nothing more than a desire to extract a little vengeance on them for having made the game in the first place, and thereby luring unsuspecting, decent people into playing it. And me, too.

SPANC is an older game, one created by Steve Jackson Games, a company notorious for making half-baked attempts at decent games and failing miserably more often than not. The title is an acronym that stands for Space Pirate Amazon Ninja Catgirls. If that sounds entertaining to you, then you should put down the water pipe and check into a rehab facility. Because that's stupid.

In SPANC, your team of catgirls marauds across the galaxy (you're all space pirates) and tries to succeed at various hijinks. The only sunny side to the game is that the art is done by Phil Foglio, who is a great artist. Unfortunately, the game is pretty much an excuse to see gratuitous drawings of girls with tails and cat ears showing off their furry cleavage, and aside from the art, the game is absolutely horrible.

What you do is, you have a series of obstacles, like cute puppies and bureaucrats and asteroid belts. Each has a rating you roll against, like Catgirl or Amazon or Ninja or (you guessed it) Space Pirate. Those are actual skills. Well, I mean, they're not actually skills. They're just skills in this game. In real life, 'Catgirl' is not a skill. In real life, 'Catgirl' is a very strange girl who likes to wear very silly costumes, and then probably have sex with men wearing very silly costumes. Or maybe other very strange girls.

Anyway, you pick a lame-duck catgirl to attempt to defeat the challenge, and then you have to roll two dice and come in under that catgirl's score in the relevant skill. So if your retarded-but-disturbingly-attractive catgirl has a six in Ninja, you have to roll under six. This is hard to do, which is why you have toys.

Toys can improve your scores. They do other stuff, too, but you only care if you're going to play this game, and hopefully, you are absolutely not going to play this game. Ever. Oh, and poolboys are toys. And they wear speedos. Which is gross, unless you're a catgirl, because then you're gross, too, because normal people want to have sex with people, not anthropomorphic house pets.

So you pick the catgirl with the highest score in the skill you need and give her the toy that will give you the best odds of winning. This is a pretty obvious decision, because unless you have trouble remembering whether eight is higher than six, there's usually only one choice that makes sense. You don't have to make a difficult decision. Your only decision would be 'do something stupid' or 'don't do something stupid.' Then you roll dice, and see if you were lucky. You probably were not, which means you don't succeed at the challenge and the game is going to last even longer.

Eventually someone will win enough challenges to have enough loot to win the game. That, or you will all decide together that this is one of the stupidest games you have ever played. Either way, you will put the game away and never look at it again. You will try to pawn it off on some unsuspecting dupe, who will no doubt curse you repeatedly for having saddled him with this horrible, horrible game.

I suspect that Phil Foglio never actually saw the game before he agreed to do the art for it. I also suspect that he gets a bit of a woody for girls with tails and animal ears. Because if those two things were not true, I cannot imagine why he would agree to illustrate this game. One play would have told him that he was about to be associated with one of the most offensively boring games every concocted, and his name would forever be tainted simply for being on the box.

The thugs will probably be dressed as Amazon catgirl ninjas. They will be able to defeat me easily, because I will be completely unable to stop laughing at them.

I have absolutely no intention of helping you find a copy of SPANC. But if you're really excited by catgirls, maybe you should talk to this guy:
HE CAN HELP YOU FIND CATGIRLS
Posted by Matt Drake at 2:11 PM

Damn you Drake ! Damn you ! Now I have seen that disturbing picture you refer to in the last link !

Drake- thank you for reviewing such an awful game so that I may laugh while you beat the piss out of it verbally. Makes my day every time.