Board Game Review - Wrath of Ashardalon 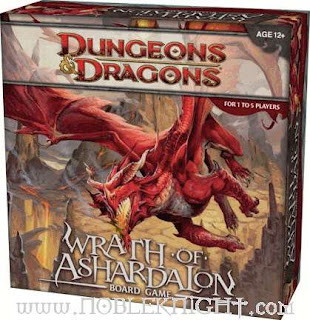 Wrath of Ashardalon is one of those games that can be problematic for a reviewer. It's not exactly an expansion for Castle Ravenloft, because it is a complete game all by itself. The problem from where I'm sitting is that it uses the exact same rules as Castle Ravenloft, which means it can be tough to tell you anything new when I already reviewed the first game. It's still fast, still smart, still fun, and still crazy expandable. It's still a dungeon crawl game that you can play solo or with your friends, and it's still a D&D spinoff. Basically, it's the same game, but completely different.

However, for a variety of subtle reasons, it's also a better game than Ravenloft. It uses the same rules, sure, and mechanically, does the same thing - but it has a bunch of different things that make it work better.

For starters, it's not as easy. The original was too predictable. You knew what the monsters would do, and you had a lot of control over where they went, which made it relatively simple to manipulate the dungeon into what you wanted it to be. But in Wrath, some of the monsters are a lot more imposing - the gibbering mouther that keeps everyone dazed, for example, or the grell with his stinging tentacles. And far too many of them are sentries.

When you draw a sentry monster, he doesn't just come rushing at you like every other monster. Instead he just stands there and calls up his buddy, who comes running over with pizza and a six-pack to crash your party. Then he spills the pizza on your sofa, drinks all the beer and throws up in your refrigerator, and starts a fight that breaks all the floor lamps. Basically, monsters will show up at random, a lot more often, so you can't control your monster flow as well in Wrath as you can in Ravenloft.

Thanks to a few basic changes, Wrath also feels less academic than Ravenloft. Maybe the biggest factor that helps it feel less bland is simply the change in locale. Ravenloft is supposed to be scary, and isn't. But Wrath is supposed to remind you of an old-school dungeon romp in a dragon's lair, which is a heck of a lot easier to do in a board game.

The random factors in Wrath also add to the tension. Both games have encounter cards, but the encounters in Wrath of Ashardalon tend to swing wildly from 'whirling death trap of death' to 'stepped in gum.' You're never sure if you can afford to lose some momentum, because the next encounter card you draw could double the number of monsters on the board and leave you up to your armpits in rabid man-eaters. Then again, it might be completely silly and produce virtually no effect whatsoever. Instead of an academic exercise, now you've got yourself a chaotic rumble. And that says 'dungeon crawl' where I come from.

Even if the changes in Wrath didn't make it a better game, there would still be plenty of reasons to buy it. Like the plastic - Strahd might have been a scary villain, but his miniature is just a little plastic dude. Ashardalon, on the other hand, is a big red dragon, and that is WAY cooler. There's also an otyugh, which is as difficult to type as it is to say with a straight face.

Plus there's just a lot more in the toolbox. Doors that could be locked or trapped, hostages to rescue, cool spell effects, and randomized treasure are just a few of the additions. Long hallways and huge chambers change the way the dungeon evolves, so that it's not just a random conglomeration of squares. The villains are more fun, too - the rage drake (no relation) that gets meaner the more you hurt him, and the hunormous dragon that spits fire all over the place just so he can roast marshmallows on your head. And that's not all, but I should let something in the box be a surprise.

If you don't have either game, you should pick up Wrath of Ashardalon first. It's better. If you like it, you can get Ravenloft to expand the experience. You can combine both games for more dungeon-crawling good times, and you'll be able to play for days before you ever even have to start making your own adventures. And then there's the rapidly exploding community of people designing new ways to play, so you'll never run out of reasons to play, unless you just get bored and want to play something where you build pig pens and bring in the mail.

Cons:
If you hated Ravenloft, you're not going to like Wrath of Ashardalon
Silly name you may not want to say out loud at work

Noble Knight Games carries Wrath of Ashardalon. If you're going to buy it, I sure would appreciate it if you bought it from them:
BUY WRATH HERE
Posted by Matt Drake at 2:44 PM

I agree with you for this one! It's really a great game!

So, Matt - how would you compare Wrath of Ashardalon with D&D The Fantasy Adventure Boardgame'? :-)

This game actually drove me back to roleplaying. I had a couple of games of WoA run to 3+ hours, thanks to the damn encounter cards and sentry monsters expanding the dungeon beyond reason, and thanks to carefully hoarded powers just barely keeping the players alive. At the 3-hour mark I thought, "Screw it, why am I playing this instead of an actual RPG?" So I ordered the Dragon Age boxed set, and I'm using the WoA minis to play rpgKids with my son. Still a good deal, IMHO.

and this game saved me from roleplaying. why would i spend 3 hours arguing with people over bad rules when i could simply randomize dungeons and combine all 3 sets and have a nice structured adventure.