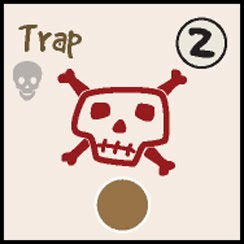 I'm going to get this out of the way, right off the bat, so that we don't have to keep talking about it - the game components produced by Victory Point Games suck. Sure, it's great that the games don't get made until you order them - but that just means they're all printed on cardstock you could buy at Staples using an inkjet printer that would embarrass you if it were in your house. Cheap cardboard squares haven't been cool since LL Cool J was on his way back to Cali. In short, the pieces you get with your Victory Point games make the games less fun to play.

Which makes it that much more impressive when the games are still fun. The Loot and Scoot expansion, which is basically a page of rules and a bunch of cardboard, makes a fun game about 72.6% better (that figure is an estimate, and may vary based on your rate plan). There are new adventurers to brave the dungeons, new monsters to battle, new treasures, and some dastardly traps.

The new recruits might seem like the real stars of the game. These duel-class warriors jumped straight out of your Advanced Dungeons & Dragons player's handbook and into Loot and Scoot. There's a very good chance one of them is really a dude playing a girl, in true D&D tradition. These hardy souls can be used for any challenges that require either of their core skills. For instance, if you're facing a troll vulnerable only to knights, you can use the paladin, and if you land on a trap that can only be defeated by a wizard, you can use the monk. And if you're attacked by a gay man in hot pants who can only be defeated with a feisty handjob, you can send in the bard.

But as cool as the new characters are, the new dungeon elements are cooler. You could stumble across poison before now, but it was easy to beat by just killing off a henchman. The new traps, though, are great. Now you can only send one guy, and he only gets one shot to kill the trap, and if he fails he dies. He doesn't go back home and cry about how the mean werewolf beat him up and took his lunch money. He doesn't run off screaming and lick his wounds. He goes belly up dead, which is what's supposed to happen when a pit opens under your feet and drops you onto whirling saw blades and Joni Mitchell records.

The new monsters are pretty cool, too. A bunch of them have wild card vulnerabilities, which means you can use anyone you want to beat on them. That means they're easier to kill, which is nice, because if there's one thing Loot and Scoot does well, it's making sure it doesn't overstay its welcome. With two new dungeon layouts and all these new monsters, you have more fun ways to kill your opponents in a hurry.

But the real star of the show, the addition that makes the expansion such a good investment, is the new secret room. Each player has one, and you have to put it somewhere in your dungeon. If someone can kill the monster and find the secret room, they can fight another foul beast and try to get a magic weapon that will make future fights a whole lot easier. The trick is that the guardian monster is one mean motor scooter who will kick your ass nine times out of ten, especially when you're already weakened by having to fight the last guy. And if you find the secret room and don't win the fight, the room moves.

The moving room is the thing that makes this so brilliant, because it adds a great bluffing element to the game. Players are going to be hungry for those secret weapons, and a lot more prone to chase after the secret room, which means that you can move it all over the map and send them chasing after the rooms with traps and poison and very rude bellhops and not after your hidden treasure troves or boss monster. It adds a whole new layer to the game that makes it far more enjoyable than it was.

It's not all wine and roses, though. Even though there are two more player mats and a whole lot of monsters, there are still only enough pieces to play this with four people. Turns are fast, and I could totally play with five or six, but that opportunity has been completely squandered because they didn't print just a few more cheap pieces of cardboard. I was surprised and disappointed that they blew a chance to open the game up to a wider audience, but then, I can still play with just four, so what the hell.

It's funny, too - my group is split on the play time. Half of us thought that the biggest strike against Loot and Scoot is that it ends too early, and the other half thought it did a great job of moving to a conclusion without stalling so long that we got bored. It's fun and fast, yet some of us wanted a couple more turns to build temples and train adventurers and work up to a more impressive band of heroes. But then, if you're still building when someone else has already killed a dragon, then you don't need more time. They just needed less.

Despite exceptionally cheap components, the Loot and Scoot expansion adds a whole lot to a game that was already fun. It probably won't make my top 50, but we had a good time playing. It was worth suffering through the crappy pieces for a game this enjoyable.

Cons:
Still depends heavily on lucky rolls
Some might say it ends too soon (but not me)
Really should have had enough stuff to play with five or six

If you want to pick up the Loot and Scoot expansion (and if you're getting Loot and Scoot, you may as well go all in), you can get it right here, direct from Victory Point Games:
http://victorypointgames.com/details.php?prodId=128
Posted by Matt Drake at 2:48 PM

I saw really much worthwhile info in this post!