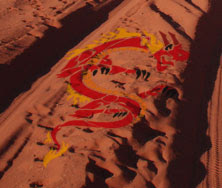 I like writing game reviews. But now and then, I just get bored. I have dozens of games I love to play, but I never have time because I'm always playing the new crap that shows up in the mail. I have to write about these games, and I've set myself a pretty lofty goal of three articles a week, which is sometimes pretty tough to do. When I'm tired and dragging and working on deadlines, I just don't feel like making boob jokes about board games.

And then there's the fact that I've been doing the same thing for three and a half years. I checked a few days ago, and I've got more than 550 reviews, rants or announcements. The jokes are not getting more interesting. They are just variations on the same stupid gags, and I'm getting tired of my own jokes. I can only say 'bunghole' so many times before it's not shocking or amusing. It gets to be more like a talking parrot repeating a pirate's bathroom habits.

Finally, this feels more and more like a vanity project. It's the Matt Drake Show, where I use this space to brain-dump whatever I feel like discussing without even trying to get anything interesting happening here. Crude gags fill out drive-by discussions of whatever I played that weekend, and they're getting a little old.

I know this is starting to sound like a big fat 'I quit' notice. But it's not. I don't intend to quit writing reviews. In fact, I plan on writing just as many as I ever have (which would be three a week, unless I feel like talking about something else). I'm still going to get free games in the mail, and I'm still going squeeze humor out of prostitution, drugs, and human suffering. The fix to my problem is not to do less. The fix is to do more.

What I want to do is create something with a little more life of its own. I would eventually like to see Drake's Flames be a place where game nerds come up with off-the-wall ideas and build those ideas into something useful (or at least amusing). Here's an example of one idea. I call it The Game Building Game.

First, I get everyone who wants to be involved to submit ideas for a wacky/stupid/crazy/hilarious theme for a game. Bums playing ice hockey, for instance. Then I put all the ideas into a poll, and we all vote for our favorite. Once we have a theme, we submit ideas for game mechanics, like flicking wooden discs into miniature trash cans. We vote on those and pick three, which we combine to create the game. Finally we have everyone send in art, and then I build the whole thing into an actual game, which we can all download and play whenever we want to play a game that could have been designed by a team of acid-dropping squirrel monkeys. The point is not to create a game that wins awards and sells a million copies. The point is to have a bunch of people put their heads together and come up with something truly horrible.

I've got other ideas, and loopy stuff I want to do on top of talking about whatever I'm playing. They're all just bouncing around my skull like a tennis ball in a paint mixer. I want to try some of them, ignore some of them, and flat-out reject a whole bunch just because they're only there due to sleep deprivation and reality TV.

What I don't want to do is make some lame website that tries to be Fortress Game Geek Info. I'm not looking to be a catalog, or a database, or a happy community of like-minded Chatty Kathys. What I want to do is something different, something I haven't seen before, something more like a mad scientist's laboratory crossed up with a mushroom hallucination.

Here's the problem, though - I can barely manage to work this Blogger site. I was writing here for almost a year before I fixed the graphic at the top and made it a full-page layout. I surely don't know how to make a site with a forum, a chat area, regular news releases and all the other crap I would need to turn Drake's Flames into a gamer version of Pee-Wee's Playhouse. Lucky for me, though, somebody else does.

I don't know who that might be, just yet. It might be you. If it is you, and you know how to put together a website with all the bells and whistles we need to turn this into an experimental drug den for game geeks, let me know. I can pay you in games. God knows I have enough of them. Plus you can be the Wizard of Oz, the man behind the curtain, the magician throwing all the smoke and mirrors while I come up with ideas that sound so ridiculous that people stop and throw spare change.

At this point, more than any article or piece I've ever written, I need some feedback. Where do we go from here? Brave new world, or more of the same? Is the answer a simple, 'if it ain't broke, don't fix it', or is there potential for insane genius? And are there enough goofballs and wackadoos out there to make something this wildly bizarre actually work? Use that comments section. That's why it's there. Plus I never could figure out how to turn it off.
Posted by Matt Drake at 7:09 PM

lovely piece and whats the worse that can happen?
here my suggestion the penguin mating game given that these facts are true (honestly)
penguins (one species) have to bring there mate a treasure in order to swap over roosting duties
penguins are dumb so if you steal his treasure (usually a pretty stone) he will carry on up the beach and be abused by his mate
penguins can fire there poop out several feet sideways
so how about a game where penguin has to hatch egg , has to get treasure so can swap with mate , and other penguins still treasure and try to stop him by firning popp
I tink that hits two of your key metrics prostitution (paying for sex) and poop

It's an interesting idea. It sounds like what you want to create is a community atmosphere where you can all work together on doing so stuff purely for fun and just to see what happens with you at the helm.

This might sound like a strange angle, but check out the way some of the more successful webcomics do things. Their whole livelihood is dependent on their ability to build and maintain a good community.

You also might want to check out the book "How to Make Webcomics". It's by these four successful webcomic artists who also run a regular podcast. There's good stuff in there about community building and site work and all that business side stuff.

I'd recommend borrowing it from a library since about half the book wouldn't be relevant to your idea here, but it's worth looking into.

I say go for it and see what kind of juice you can wring from this fruit.

You had me worried there for a minute. I look forward to every one of your reviews, and you've turned me onto several games I might never have heard about otherwise (most notably Fiasco). Love what you do, and I love your offbeat writing style.

I also look forward to seeing what your new project brings about. Doesn't sound too far off from how James Earnest started Cheapass Games. :)

I've been reading your reviews for some time now, feels like a few years. I have purchased many of my games off of your input and would like to extend my gratitude for your work.

It Sounds like you need a good all inclusive vacation. Take the "Blah" out of the daily routine. Sometimes it's the only way to recharge!

Thanks for all your input and my best to you moving forward :)

I would certainly play the Create a Game game. Don't want to miss out on what you've got going now though. You might consider an occasional guest reviewer just for a break once in a while.

Sure man, I'm game with concocting some crazy game ideas. But don't forget to have a life besides this blog now, ok? :)

I can imagine how you feel with the review writing; three a week is an insane rhythm, you know that, right?

Your mad-scientists-create-a-game project sounds pretty awesome, I'd enjoy being a part of that. I can't really help out with the technical side, but I can come up with a lot of crazy game ideas.

A downhill race on a big pile of junk. With carts made from junk. Falling apart while you race. So you have to patch them up with whatever junk you can grab from the pile or other carts. Without stopping.
Sounds fun to me at least.

Good luck with that project, I hope you'll keep us posted.

Interesting idea Matt. It will live and die by the participation of your audience. I have seen that kind of dedication in forums like consimworld. I have my doubts whether you can find that kind of fanaticism in the blogger world. But I may be wrong. If your readership is big enough, you might find the perfect storm of fans elan, free time, and good ideas. More power to you!
On the technical side, I think you are looking for some kind of collaboration software. Something that gives you the ease of editing that a wiki gives you, yet has forum and polling capabilities. Perhaps you want to look for something in the cloud, like SAP Streamwork, but not for a business audience. My employer offers us a collaboration platform from Jive Software that has potential. A friend of mine used pbworks to set up an ASL tournament. It'll make your life easier if you do not have to host it yourself.

While I of course would like to see how a drive-down-the-junk-hill game would turn out I am perfectly happy with the reviews as they are. Sure, your jokes are variations on the same theme, but they are very funny variations. You as writer may be tired of them but I can assure you: I as a quite dedicated reader am not.

Matt, I agree with Kai that three a week is an insane pace, most freelance writers don't even do that much. I don't come here so much for the bathroom humor but for the fact that you have been so good at warning me about the turkeys that I buy games that get a good rating from you - sight unseen. This coming from someone that never bought a game without playtesting someone else's copy...

For Kai: if you haven't tried out Galaxy Trucker, it is slightly like your idea.

Switch over to a hosted Wordpress account. You can get most of the features you are interested in as plugins with little to no effort. This has gotten a lot easier than it used to be.

Thank you all for your feedback. I'll definitely check out Wordpress. If that works the way I hope it does, I may be ready to take a shot at this - probably around mid-summer.

You ahve never seen the Toronto Maple Leafs play have you?