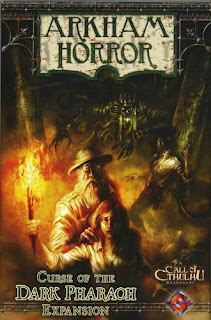 Game expansions are generally created for one of two reasons. First, they exist to extend the value of the original game and give players more enjoyment out of their initial game investment. Whether an expansion adds new stories, new mechanics, or new options, players can get more fun out of games that had grown stale and begun to be boring.

The other reason expansions are created is because publishers know how many suckers out there will buy all the expansions before they even try the game, then end up with all those boxes taking up copious space at the bottom of a closet somewhere, until the owner finally remembers that he owns them and donates them to a local thrift store. So the second reason expansions are created is because publishers like to get paid.

Which brings me to the main question you should ask yourself when you're reading a review about an expansion: Why hasn't this luddite asshole started doing video reviews yet? (In my case, it's because I am not what you would call a handsome man. That has not stopped most other video reviewers, but I have enough pride to hide my face.)

No, wait, that's not the right question. The right question is: Will this expansion add enough value to my original game for me to bother buying it? And if that's the right question, then it could be inferred that a good review of an expansion would answer that question for you, maybe even make up your mind for you through a complicated mix of coercion, persuasion and magical mind control.

Too bad I don't have any of those things. Think for yourself. I'm just here to make insipid jokes and get free stuff in the mail.

So is Curse of the Dark Pharaoh worth your money? That depends entirely on you. Do you play Arkham Horror a lot? Have you memorized all the location cards, until you know exactly how likely you are to get a membership to the Silver Lodge instead of being attacked by a mind-melting monster from an alternate dimension? Are you tired of that one guy at the table who always knows the exact right item to buy, and bullies you into buying the cigarette case when you really wanted the bullwhip, and now you wish you had the bullwhip because you want to hit him in the face with it the next time he says you're stupid for going to the Black Cave when there were more clue tokens at the police station?

If you said, 'yes' to all those questions, then you should stop reading out loud. Just answer the questions in your head. Also, the guy on the other side of your cubicle wall asked me to tell you that he's had it with you singing show tunes. Save it for the car, Dorothy.

Curse of the Dark Pharaoh doesn't really throw a new twist on Arkham Horror, at least not the way I was hoping it would. It does replace every location card with cards more specific to the traveling museum display that has brought all the bad guys back to Arkham, and it replaces the gate cards, so you'll have all new encounters. That part is pretty cool, actually. It also introduces a deck of creepy artifacts that relate to the doomed exhibit, and they're pretty interesting, too. New spells seemed about as useful as a barn door on a submarine (no, that isn't the right saying, but I maintain it is still apropos), and the new allies are even less compelling. But the new stuff on the mythos cards (which you'll draw every other turn) have all kinds of cool options, in addition to spreading the cult of Yig (well, in our case it was Yig. You might be dancing with Shib-Nuggo-Hooja-Gig, the Third. Seriously, what was Lovecraft smoking when he named these bad guys? You know it's bad when 'Goat with the Thousand Young' rolls off the tongue easier than the actual name.)

Basically, there's not much in the way of new rules in Curse of the Dark Pharaoh. There's no new ancient evil. There are no new investigators, and no new monsters. If you're playing Arkham Horror for the mechanics of the game itself, the all-against-the-game cooperative gaming experience, Curse of the Dark Pharoah is going to disappoint you. If you were already bored with Arkham Horror, this expansion isn't going to change your mind.

On the other hand, the new story is pretty interesting. The traveling museum exhibit featuring the lost artifacts from a long-dead religious cult has brought with it a retinue of cultists, nutjobs, and dark energies, and once again, Arkham has gates to alternate dimensions opening faster than new Starbucks franchises. And once again, the investigators have to close all those gates before some sleeping ancient evil wakes up and eats the East Coast like a Hostess cupcake. So if you enjoy the comfortable familiarity of the original rules, but really only play to see how the story evolves, Dark Pharaoh may give you a good reason to take another trip to the world's unluckiest small town.

And if you've only ever played Arkham Horror once before you stuck it on a shelf to play the other fifty new games you got this month, then you should ask yourself why you would even consider buying an expansion in the first place (I already know why - it's because you're a sucker for expansions. Fantasy Flight asked me to thank you for your support).

Pros:
A new story gives you a new reason to fight evil and go insane

Cons:
Mechanically, a lot more of the same

If you love Arkham Horror and just want a new story to tell, you can get a copy of Curse of the Dark Pharaoh from Noble Knight Games:
GET CURSED
Posted by Matt Drake at 2:20 PM

You make some really good comments here. I have played with both the Curse of the Dark Pharaoh and with the Black Goat of the Woods Expansion. The option with Pharaoh to replace all the cards make it a much more effective expansion. I found that Black Goat has only a minor effect on the game, namely more Mythos events and a tougher monster pool. In two games one player managed to join the cult, and managed to have a single cult encounter.