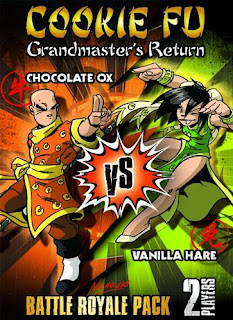 It's not often that I read the rules for a game and then wonder what the hell I'm supposed to do. It's even more rare for me to play the game and then end up making that sound Tim the Toolman used to make when he was confused. If I typed that sound, it would be something like 'Erruhnh?' Which I think was actually the same sound Scooby Doo used to make.

Cookie Fu elicited one of those odd grunting sounds that you can say but not type. The rules were downright confusing, and I had to read them three times to figure out what I was supposed to do with this box full of dice. Then I played the game, and was a little less confused, but still not sure what it was supposed to be. Then I went online to find more, and came very close to throwing up my hands and making another sound, this one quite a bit more intelligible but a lot less appropriate for family-hour television.

From what I've gathered after extensive Internet research (by which I mean I went to the publisher's website for five minutes), Cookie Fu is currently limited to just the starter packs. And apparently, it's a collectible dice game. But you can't get dice beyond the starter, so maybe that's why I'm confused - it's a collectible game that doesn't have anything to collect.

Another thing that confused me is why there were fortune cookies in the box. I mean, it's a cool gimmick, but I'm not eating any food that comes in a game. I smashed the cookies to get the fortunes (which are special moves, not actual fortunes), and then threw out the cookies. I get that it's called Cookie Fu, and comes with actual cookies, but honestly, there's a limit to the amount of prepackaged food I want to ingest, and when it's prepackaged with dice and packing peanuts, I'm not eating that.

The game also confused me because the rules didn't make sense. There's some jabber at the start about how whole cookies are better than crushed cookies, but it wasn't until I actually pulled out the dice and read the rules a few more times that I figured out I was supposed to roll a die with pictures of cookies on it to figure out who swings first.

So here's how the game works, as far as I can tell. You have a handful of dice, and so does your opponent. One of your dice has pictures of cookies on it, in various states of disrepair, and this one is used for a sort of rock-scissors-paper dice-off for initiative. The others have fists and feet and grabby hands that let you attack your enemy or defend yourself. You hide your dice, and take turns showing them to each other and saying, 'I kicked you in the pubes.' Some dice let you attack, like if you have punches or kicks, and others let you defend, like blocks and grabs. You might also roll Chi, which lets you do more powerful attacks that are harder to block.

OK, so this part actually makes sense. You select the dice that you think will do you the most good, and save the ones you need for defense. Or, if you're me, you look at your dice and realize that there's absolutely nothing you can do with them, and say, 'I stand here like a rube while you punch my face out the back of my head.' Some dice can be used for multiple things, and you might want to save them for defense, or use them to set up a killer grabbing and throwing combo move. And then you have Chi.

Chi is where this game actually begins to be worth something. You won't see a whole lot of these, but when you do, they're useful for all manner of powerful super-attacks. You can unleash your clan moves with Chi, or you can do a Flaky Crust Boot to the Head, or Sugary Face Punch, or Dry and Stale Tooth Decay (that last one is not a special move, exactly, it's just what you get if you eat cheap fortune cookies that come in games). You can also use these Chi dice to stop some of the more violent attacks, and even save them for later, if you think you can hold out that long. The Chi adds an element to the game that takes it from a rather insipid festival of luck and makes it interesting.

Another thing that helps is if you don't play the novice-level game for very long. Once you understand what you're doing, you'll want to add some of the more specialized dice and add more options to your repertoire. When you do, the game gets a less about lucky dice and more about risk assessment and planning. In order to work all the way up to grandmaster and roll the cool green dice, you'll need a bunch of dice for each player... which means you'll need to collect more... but there aren't any more to collect. So just buy the game again. I figured out that for two players to be able to play at the highest possible level, you'll need to spend two hundred dollars. And if you do, then you are stupid.

I can't gush about Cookie Fu because it's got too many problems. A collectible game with nothing you can collect seems pretty well doomed to me, especially when I would actually be interested in getting more dice, if I didn't have to fork over a car payment for them. And to say the learning curve is steep is an understatement - you have to memorize a lot of stuff before you're not just randomly showing each other dice like a six-year-old showing off a booger. And I'm not ready to sign off on food in my games, no matter how full of preservatives they might be.

But I can see a lot of potential in Cookie Fu, if the publisher pulls his head out and starts doing a few things right. Releasing some boosters might help, for starters, and a massive rules overhaul should be a huge priority. Because at its core, Cookie Fu is a fun, quick dice game with lots of direct face-bashing and clever maneuvering. Granted, collectible games are as dated as Nirvana and plaid shirts, but the game itself is actually interesting and fun. If you play it a few times, you may even get close to a point where you don't feel like a caveman operating a helicopter every time pick up the rules.

Cons:
Confusing rules
Collectible game with nothing to collect
Food belongs in the pantry, not in my games

If you can't hold out a few months to see if Blue Kabuto actually releases more dice, you can rush over to their site and pick up the starter:
http://www.bluekabuto.com/
Posted by Matt Drake at 7:30 PM

I am sorry that you had some trouble grasping the way of the cookie. Sounds like you have a little bit of the evil sorcerer Bok Choy in you! ^_^

Do not be discouraged Grasshopper, Cookie Fu is available in many formats: the Battle Royale 2 Player Set, Single Player Clan Packs (Chocolate Ox, Vanilla Hare, and Coconut Monkey) and yes, of course... boosters! The game is available at your local gaming dojo as well as many online retailers. The Grandmaster only sells the 2 player set at www.cookiefu.com though as most stock goes out to retailers.

Cookie Fu is easily enjoyable with as little as one Clan Pack, and can easily scale as far as you'd like - all the way up to "Grandmaster" level. Should your quest for knowledge lead you to purchase enough Cookie Fu to play at the max level - you would at most spend $37.94 ( 1 single clan starter @ $7.99 and 5 Booster Packs @ 5.99 each) - which is a considerable savings compared to 200 bucks!

I urge you to visit the Cookie Fu dojo at: http://www.facebook.com/cookiefu to chat with others about the game - if you are lost and need direction on your quest for enlightenment, the Fu Fighter's Forum at: http://www.bluekabuto.com is a great place for guidance. The Fu is quite strong there!

The Grandmaster thanks you for your honest review, it's always nice to have a fresh perspective on things - even though this cookie was not especially to your liking...

See, now THAT's how you approach criticism to your creations. Nicely done Brian, your response even got me thinking about pickig up a copy, after all, Matt IS kind of old so it's hard to fault him for not understanding rules, ha ha ha. Maybe we ought to get him a nice new set of checkers or a deck of cards and set him up with gramma for canasta? Then again, grammas tend to be mean at that too. ;)

Nah, Matt rocks actually, maybe he just eat a stale cookie and it muddled his brain? Lack of playing Heroscape for long periods of time tends to have that effect. Still, maybe a revised rulebook may not be a bad idea as he said, you know, just in case your game ends in the hands of geezers.

Sorry to see only 2 posts this week. But life gets in the way sometimes so it's understandable. Still a bummer though.

Thanks for the game, Brian. We did enjoy it. And I did say this:

"Cookie Fu is a fun, quick dice game with lots of direct face-bashing and clever maneuvering"

We had a good time with it, especially once we quit trying to play with just the 3 common dice. You really need to customize your fighter with the specialized dice.

And Syntax - the week ain't over yet.

I have the original dice, with corners so sharp, you can do real damage with them. The new dice are awesome, even if the Chocolate Ox clan are the same colors as the Lava Elves in Dragon Dice.. ^_-

Fun game, glad it got the upgrade to decent dice!