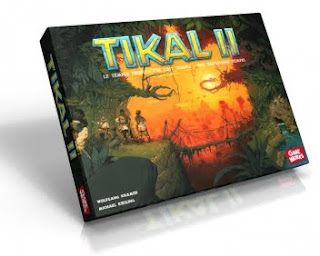 Once upon a time, in a land not unlike our own, there lived a prince. He was kind of a wiener, and he had silly ears and cheated on his hot-ass wife with a woman who had buck teeth and a horsy laugh. So we're not going to tell a story about him, because this prince was a douche and his story would be lame.

Instead, our story will take us to a nearby land, which is not as much like our own land, but still not totally different. In this magical far-away land (not unlike our own), there lived two designers, and they made a game. They poured their hearts and souls into this game, and then rubbed it with a little bit of dust they pulled out of a pixie's bunghole (pixies poop magic dust). They brought their magical game to the people of the land, and a whole bunch of people that I don't know said it was a brilliant game, and gave it awards and stuff. That game was called Tikal, and it had many adventures before fading quietly into the realm of games that everybody likes to talk about because it makes them sound like they know more about games than they really do, as if knowing lots of information about European games would ever make you more likely to get laid. It won't, by the way.

Well, one day, these two adventuring game designers decided to set off again in search of magical treasures and paychecks. They put their heads together and decided that the best way to recreate the success and magic of their first game would be to make a sequel to the game. To make sure that all the people of the realm knew it was a sequel to their wildly popular game that won awards but that I've never even seen, much less played, they called it the same thing, but then put a 2 on it. Their new game, which was destined to take the world by storm, was therefore called Tikal II.

But there was only one problem - the game designers forgot to rub pixie poop on their new game. Without the magical pixie crap, Tikal II just didn't have the same charm. Basically, it was fun, but it was kind of a pain in the ass to play. It was magically beautiful, but it just didn't make much sense, and without the pixie dust, the game had too much happening at once.

In this non-magical game, every player got to pretend to be an explorer and his posse competing to unlock the mystical treasure of an ancient temple. Kind of like Indiana Jones, but not exciting, and with no women (pixie dust may have added hot Nazi chicks, but alas, no pixies). The players would send their canoes around the peninsula looking for clues and keys and other stuff that would appear on action tiles, and then they would pretend to be the explorer tromping madly through the temple. Players could score points in the first part of the turn for all kinds of things, like grabbing treasures and scoring rooms, and then they could get points in the second part, mostly for exploring rooms inside the temple and maybe for getting their dumb asses locked in a secret chamber.

Sadly, without the magical pixie excrement, the game bogged down and wound up getting boring by the end. Sure, there were lots of things to do on your turn, and you always had lots of options, but it became difficult to keep all the options straight. You could grab a key, and then it could go down or up. Or you could grab treasure and hide it, but you still had to ship it back home if you wanted more points (apparently in the crazy land of Tikal, the treasures would spoil if you didn't get them in the fridge fast enough, and then they weren't worth as much because they had mold on them and smelled like grandpa's feet). Maybe you could discover a new room, which your explorer could then explore, but you could also find a secret passage or an altar or some other damned thing that you would have to keep track of, and it would all start slipping around in your mind until you ended up completely forgetting that the turns were supposed to be passing to the right for the second round.

It's not that Tikal II was hard to play, really. The rules eventually made sense, especially if you played a little bit. After a few turns, you could remember what all the stuff was supposed to do. It was more like the game just had too many things happening at once, and while you could certainly play it, it started to drag after a while. If the temple was half the size and stuff happened way faster, it might be more fun, but then again, it might not. Unfortunately, in the absence of magical pixie poop, Tikal II was a graceless, lumbering beast that stayed so long that its hair got everywhere and it started to make the furniture stink.

However, even if they forgot to make a pixie drop a deuce in the box, the designers did hire a wonderfully talented artist to make it beautiful. While the game itself was not amazing, it looked like it should have been. The paintings on the board and the tiles and everything else came pretty close to transporting the players to the depths of some forgotten South American jungle as they traipsed around a completely harmless temple. The plastic bits were equally remarkable - each explorer had a different sculpt, and the little canoes were undeniably cool.

This story has not ended yet, but if I had to guess, I would bet it ends a lot happier for the two game designers than it probably should. See, the people of the realm knew that the first game was a big hit, even if they had never played it or even seen a copy. And so based on the success of the original, lots of people would run out and buy Tikal II just because the original was so impressive, and then persuade themselves that they loved the game. They might even say that they could see the pixie dust, because this magical land was full of people who liked to say they could see things that they could not so that other people would think they were perceptive and maybe, just maybe, want to sleep with them. In case you’re wondering, that still won’t work.

And those people might actually like Tikal II. The game designers were very good, and the game was ridiculously pretty. It was put out by a respected publisher, and while it was busy and overburdened with unnecessary tasks and little tweaks that could have been removed to make the game faster and easier to play, there are always gamers who will enjoy something. Tikal II wasn't a terrible game, just not the magical, record-breaking success the designers were hoping to create.

Hopefully, the next time these two game designers get together to have an adventure in game design, they'll remember to catch a pixie and force him to take a dump in the box. Then they will live happily ever after (but not the pixie. He's going to have permanent emotional scars).

Pros:
Great theme, even if it is missing the exciting parts
Lots of options and tricky choices to make
Holy crap, is this game pretty

Cons:
An overabundance of tweaky little things make the game a bit of a chore
A decided lack of magical pixie manure

If you just absolutely feel like you must play Tikal II, you can get it from Noble Knight Games, and save ten bucks.
PIXIE DUST LINK