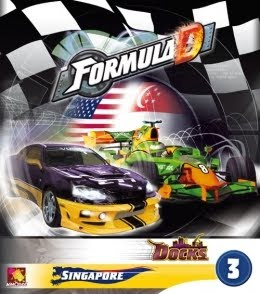 I love Formula D. I play it all the time, and at nearly every available opportunity. It's one of the only racing games I've ever played where I feel like I'm really racing, where I can almost see the smoke billowing from my overworked gear box and hear my tires squealing in protest as I blow through a corner.

But there's a problem - I get bored running the same race over and over. I have the original track that came with the game, plus the first two expansion tracks, but still, I am always in the mood for something new, something interesting, something with some teeth. Hopefully not actual teeth, though - that would be really creepy in a racing game.

And that's why, when I got the new expansion tracks from Asmodee, I got all excited and hollered just a little (I try to restrain my enthusiasm when my children are sleeping, even though they're high school students - when you have teenagers, you'll understand how much nicer things are when they're asleep). And when I laid the boards out and saw how cool the new tracks look, I couldn't wait to break out the tiny plastic cars and go flying through turns and destroying perfectly good automobiles.

The simpler side of the board is Singapore. It's a pretty straight-forward race, with the usual complement of twists and turns and tricky bends. But what isn't obvious at first is how difficult it can be. There are several places where you could upshift, if you're feeling lucky - but you may not want to. When a low roll could stick you at the wrong end of a turn, and a high roll could send you hurtling past it out of control, it can be tough to decide which gear you should use.

In fact, out of all the tracks I've played, I don't think I've ever played one that required such a careful balance of common sense and balls. The curves are spaced just wrong - drop a gear, and you could wind up puttering up to the finish line four hours after everyone has gone home, but if you shift up, you might wind find yourself flying ass over teakettle into a skyscraper filled with lawyers and Yakuza masterminds. And then you would feel really bad about killing all those nice gangsters.

But while it has plenty of places where you have to decide between glory and restraint, Singapore is otherwise an unremarkable map. It's basically just a standard two-lap race. It's a good track, but it's not all that thrilling, because it doesn't really give us anything we haven't seen before. It's like trying a new flavor of ice cream that's just a twist on an old favorite - it's fun to try something new, but it's still just vanilla with different candy in it.

For a real taste of a whole new race to play, you need to flip over the board and run a few races at the Industrial Docks. This is an absolutely fantastic track. It's got everything - difficult turns in technically challenging series, road hazards that could make you spin out your car, and even better, it's three laps in one.

See, the track is only one lap, but it has three different loops. There are pits, so you can still stop for new tires if you're driving like a maniac, but only if you run the loops in a particular order. And this forces a decision - do you drive hell-bent for leather for one lap so you can pull a good lead and then swap tires for the last two, or do you drive conservative for two laps hoping to push yourself at the end? Or maybe you just feel particularly lucky, and save the loop with the pit stops for last, in which case there won't be any reason to stop - but you better be careful with those tires. You may want to try to choose different loops than your opponents, so that you don't spend the whole race swapping paint, or you may want to be aggressive and block them in until they crash into you and send you both to an early grave.

And that's not all. There are multiple ways to set up the race. You can start all in a line, with everyone choosing their route ahead of time, or you can play a normal race and run the laps in order. An enormous starting area gives you plenty of room to switch loops between laps, so while all the other drivers are bumping into each other on one loop, you're driving another all by yourself. This adds an element that has been largely missing from Formula D before now - strategy and planning. Sure, you could always decide to take a conservative first lap so you could skip the pit stop, but now you can make much more meaningful decisions right from the outset.

There is one feature of the Industrial Docks that makes me particularly giddy - a ridiculously long straightaway that gives you plenty of room to get to sixth gear. One complaint I've had with nearly every Formula D track I ever played was that even if you do manage to get to sixth gear, it's probably suicidal. But if you play the Docks well, you can come out of one particular turn in a high enough gear to actually make sixth gear a good idea. When I realized that I had just finished a turn in fifth gear and had more than forty spaces in front of me, I turned to my opponents with a grin that may have made them wonder if I was about to murder them and eat their kidneys. They were probably not too worried. They know that I don't know enough gamers that I can spare one just for kidney pie.

If you like Formula D at all, you really owe it to yourself to pick up this expansion track. Singapore is a very fun track that will reward you for driving like you had a pair and punish you for driving like you were high on prescription painkillers. And the Industrial Docks are easily the most fun I've ever had with this game, which is remarkable when you consider how much fun I had with the game before I ever got the new tracks (I had a lot of fun before, in case I was not clear). Asmodee really stepped up and gave us a couple great tracks. Once again, I can't wait to run out to my car, throw it into high gear and hurtle through turns at incredibly unsafe speed.

Of course, I would almost certainly crash into a van full of grade-schoolers on their way to soccer practice, so I better stick to board games for now.

Pros:
Same beautiful graphics we've come to expect from Asmodee
Two excellent tracks that are begging you to drive like a bat out of Hell
Finally, some real strategy and planning, right from the starting line

Cons:
Can't think of any, really. These tracks are really good

If you race over to Noble Knight Games, you can save a few bucks and get yourself a copy of the latest expansion track:
START YOUR ENGINES
Posted by Matt Drake at 7:49 PM

"...made them wonder if I was about to murder them and eat their kidneys."