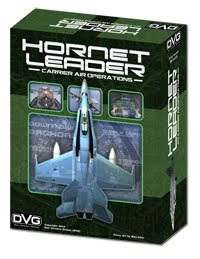 When you think of games about fighting in jets, you probably think of something like Wings of War, where you maneuver planes around the table and try to blow up your opponents, one airflap at a time. So when I opened Hornet Leader and saw that that board looked like a Venn diagram, I was a little non-plussed. Then I read that it was a solo game, that you can't even play with anyone else, and I was suddenly wondering if I might have just lost that loving feeling.

But after reading the rules, Hornet Leader starts to make more sense. It's not a dogfighting game. It's a game about planning air strikes, taking out targets, and managing a team of bad-ass, widow-making pilots dropping bombs and taking names. It's also a game about getting your ass kicked because you didn't plan very well.

Instead of just outfitting one or two planes, you'll outfit an entire squadron. Depending on the engagement you want to play, you'll have access to U.S. planes spanning fifty years of construction. You'll have lots of missiles and bombs and rockets, plus electronic counter-measures. All these options mean that when you finally get over the target and discover that you should have equipped your planes with more radar-seeking missiles, you'll have the opportunity to write the next of kin and tell them their sons are dead because you were stupid.

The actual game play isn't that difficult. Your guys shoot, bad guys shoot, and then you see if anyone is still alive. I managed to play a whole game without losing any pilots, though one of them still flinches every time someone says, 'night run.' But every time I played, I found myself spending more time selecting planes and munitions than I did actually playing. There's an incredible amount of micro-management, and you can't take it lightly or you're practically guaranteed to fail.

You'll select your targets from a deck of cards, showing stuff like radar stations and government buildings and tank convoys. Then you'll pick and tell yourself that you can beat it. You'll slap missiles and bombs all over a bunch of planes and send them bravely into the air, and when the anti-aircraft on the ground blows all the guided missiles off your best Tomcat, you'll figure out that your mouth was writing checks your body couldn't cash.

In case I'm not being clear, this game is hard. A decent player with good planning can pull out a marginal victory, but you're going to have to play several times before you'll be able to achieve a victory you can crow about. I could tell you that a little planning and luck will carry the day, but I don't want to blow sunshine up your ass. Hornet Leader is fun, but it's not for wimps.

And when I say it's not for wimps, I don't just mean you have to be brave. I mean you have to be willing to sift through piles of information (literally - the pilots are all on cards, and there are hundreds of them) just to decide who you want flying for you. Then you have to wade through dozens of different armaments, keeping in mind weight limits, distance to the target, and whether your pilots can get by with smoke breaks or if they really need full-body massages with happy endings. The sheer volume of data can be overwhelming. The creator of this game did his homework, for sure, but he didn't dumb it down.

This is where the game really breaks down for me. I really enjoyed playing Hornet Leader, but I just don't have the mental stamina to stick it out. I tried a long campaign, and after three hours of managing stress, weight penalties, infrastructure damage, intel and a bunch of other minutia, I was tired. I love the idea of picking a bunch of pilots and taking the highway to the danger zone, but after all juggling all these details, I just felt a desperate need... a need for speed.

Hornet Leader is a meticulously designed game with an incredible attention to detail. If you ever wanted to know how it feels to command a battle group of planes from an aircraft carrier, you should join the Navy. Of course, you're too old for that, and you probably couldn't pass the physical anyway. So you'll have to settle for Hornet Leader, which is a lot of fun, if you can handle all the details.

But don't screw up, or you'll be flying a cargo plane full of rubber dog crap out of Hong Kong.

Pros:
Amazing detail
Great planning will pay off, and poor planning will kill you
Lots of tactical decisions and difficult choices

If you've got the guts to tackle a game this brutal, you should run over to Noble Knight Games and pick up a copy. It's fun, especially if you spend a lot of time playing with yourself.
BUZZ THE TOWER
Posted by Matt Drake at 3:37 PM

I recently bought this, after loving Phantom Leader and the print & play version of Hornet Leader II (this being a much upgraded version of the latter and its expansions).

I've never played a long campaign in one sitting, but I have played some of the shorter ones that way - I just find the longer ones are better spread out over a few days. With the options for flying secondary missions in Hornet Leader, which Phantom Leader didn't have, I can see having to play even more missions per campaign than before... probably too many for me, unless I spread them over a weekend. I do tend to prefer the shorter campaigns, even when I have time for more, so it's not a problem for me.

Also, remember that you get bonus SO points to spend on new exciting ways of blowing things up if you randomly pick your pilots! Totally worth it, as long as you cheat and guarantee yourself one of the ones with an amusing name.