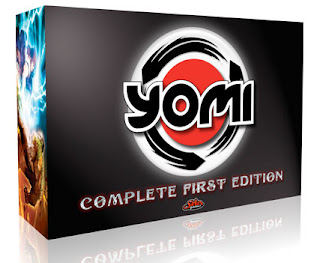 I grew up in the 80s. Back in those good old stone ages, the only place you could find good video games was at the arcade. We would saddle up with a roll of quarters and roll out to a dark room, lit up from the glow of the glass tubes, with pings and beeps and explosions echoing off the walls. We would wander around, spending our money a quarter at a time, playing all kinds of games with guns and joysticks and buttons and roller balls. And while I was never very good at them, I still ended up spending all my money on my favorites - fighting games. I spent God only knows how much money trying to master Mortal Kombat, Street Fighter, Capcom VS Marvel and a whole lot of games I can't even remember any more.

Those days are long gone. There are still arcades, but most of them take swipe cards these days, and I haven't seen a good fighting game in years. All I ever see are games with guns. I can get Tekken and Soul Caliber and all the DOA games for my consoles, but I still can't face off against a complete stranger in a dank dungeon surrounded by garbled voice effects and warbling sirens, sweating all over a joystick and probably picking up seven different kinds of ebola from the last fifty snot-nosed kids who smeared their mucus all over their hands before they started slapping those buttons. And if I lose at home, I can just play again. Lose in the arcade, and you had to go to the back of the line - losers walk in the arcade.

Apparently, Dave Sirlin remembers those great fighting games, too, with their ridiculous characters, hidden combos and split-second timing. Dave has created a series of games that all take place in a fictional video game called Fantasy Strike. His first two games, Flash Duel and Puzzle Strike, were faintly reminiscent of those arcade monuments of bygone days. But when Dave finally decided to really turn it up a notch, he went and made a game that feels so much like an arcade fighting game that you'll wonder where to drop a quarter if you lose.

Yomi has everything you'll see in one of those old-school quarter-eaters. You've got an over-the-top cast of characters, all drawn like they just popped out of a Capcom spin-off. There's the stone golem, the gambling panda, the hot ninja, and even the bearded master who turns into a mean-ass green dragon. There are attacks and blocks and throws, crazy combo attacks and powerful counter-strikes. But most of all, there's the eternal attempt to guess what your opponent is going to do half a second before he does it.

According to the slightly self-indulgent explanation provided in the rules, yomi is Japanese for reading, as in reading an opponent and guessing his moves. In Yomi the game (as opposed to yomi the Japanese word), both players play a single card at the same time. Attacks beat throws, throws beat blocks and dodges, and block and dodges beat attacks. Hit your opponent with an attack or throw, and you may be able to string together a combination of punches and kicks that sends them reeling. Finish it off with a powerful combo ender, and you'll pound your opponent right into the mud.

One thing that is really amazing about Yomi is how the rules don't change, and yet every character plays very different. Grave likes to telegraph an attack, psyching out his opponents and then switching it up when they least expect it. Rook can block attacks like a stone giant (because he's a stone giant) and then retaliate with devastating throws. And Setsuki can afford to play ridiculous combos and still have cards in her hand, because she's got a killer power called Speed of the Fox. Considering her scant attire and tendency to flip upside down a lot, maybe her ability should be called Speed of the Beaver.

But even with the different strengths provided by any particular character, there are still lots of different strategies you could adopt with any of them. You could play a defensive early game and power up for a couple back-breaking blows, or you can hammer your opponent with flurries of swift attacks. Swing for the fences with powerful throws and press the advantage while your opponent reels backward, or build up great combinations and unleash them when your opponent finally leaves himself open.

Probably the most important part of Yomi, and the thing that makes it an absolutely spectacular game, is the importance of out-guessing your opponents. You'll have to look at your opponent's hand (the backs, anyway - if he has any sense, you won't see the front of his cards until you're wearing them for a hat), remember what he's played, and exercise just a little clairvoyance to time your blows so that you attack when he tries to throw, block when he punches, and throw him when he tries to dodge. It would seem almost arbitrary, except that specific moves are often the best moves. If your opponent is low on cards, he probably needs to block. If he's been powering up for several turns and has a hand full of deadly attacks, he's probably itching to use them. Plus you can often draw your opponent into specific maneuvers, setting him up for your ultimate secret weapon of destruction, leaving him cursing furiously as he gets thrown to the ground - again.

For a game that's channeling those old arcade hits of my golden youth, the art in Yomi is spot-on perfect. When I dodge an attack and follow up with a throw against my defenseless foe, I can almost hear cheap speakers reverberating with the sound of digital smack-downs and grunting battle cries. When I finally reduce my opponent below zero hit points, I keep expecting a booming voice to rise from the table and say, 'Finish Him!', expecting me to pull out his spine or light him on fire. Instead I just start shuffling and say, 'one more!'

Yomi is available in two-deck sets, so you can try it before you dive in the deep end, or you can splurge and get all ten decks at once. The deluxe version comes with two very cool battle mats and little counters you can use to track your life, and it has the added bonus of saving you 25 bucks and getting all ten decks at the same time. I'm having a great time experimenting with all the characters, but I'm also looking forward to finding a favorite and sticking with it until I master it, the way I used to pump quarter after quarter into Street Fighter as I attempted to figure out how to routinely beat all comers with Chun-Li (don't judge me. That flippy-kick thing was my speciality).

Yomi is a magnificent game. It has been tested so thoroughly that no character feels better than any other - all have weaknesses and strengths that can be exploited, and every character offers a different feel. It's smart and fast, which are two things I love in a game, with rules that you can learn in a matter of minutes before diving head-first into a crazy martial arts tournament that will have you missing those dimly lit digital palaces of your youth (unless you're too young to remember arcades and think the game room at the miniature golf place is as good as it gets).

Pros:
Easy rules that will take a long time to master
Different experience with each of the various fighters
Layers of game will have you reading your opponent while you plan your moves
Crazy fun, with lots of reasons to play over and over

It's time for my regularly unscheduled sponsor pimping. Here's how this site works:
You request a game review.
I ask the publisher for it, and they ignore me because I said one of their other games was a transvestite.
I ask Noble Knight Games for it, and they send it to me because they know I'm dead sexy.
I review that game, you get your review.
See, Noble Knight Games sends me all kinds of stuff I couldn't get from publishers because I have made too many crude jokes about those publishers' product lines. And so, in return, I ask you, the people reading this, to shop at Noble Knight Games. Don't click the ads if you're not interested. Don't try to send me money. I have just one request - if you're going to buy a game, get it from Noble Knight, and let them know I sent you.
If you're going to buy Yomi, here's a link to save yourself a bundle.
BUY THIS SWEET GAME
Posted by Matt Drake at 8:37 PM

Even though the game sounds plenty fun and worth the buy, I can't help but joke that it should have been called "Rock, Paper, Scissors Fighter". :-)

Matt, I'd like your take on Merchants and Marauders and especially on War of the Ring.

There's my regularly unscheduled commentary and request for reviews!

TNT, if I can put my hands on Merchants & Marauders, I'll be delighted to review it.

War of the Ring, though, will have to be a quick micro-review. I had it, now I don't, and I don't want to review it bad enough to get another copy. It's not bad, but the rules are enormous and there's lots of minutiae to track, until it turns into a pain in the ass.

Other people love it.

That's all I got.

It's an awesome game!

Yes Yomi is a magnificent game!!

As an aspiring game dev, I fell in love with yomi the second i read the rules and I instantly bought the full set. I also bought by favorite character on the online version. I just wish the community was larger.