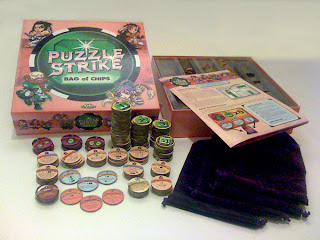 At first, it was kind of tough to say what kind of game review I was writing. I mean, I know it was a game review, and those really only come in one flavor (at least when I'm writing them) - a flavor called 'off color.' But it's hard to categorize Puzzle Strike as a board game because there's no board, or a card game because there's no cards. It bills itself as a card game that uses chips instead of cards that simulates a puzzle game that doesn't exist that simulates a fighting game that also doesn't exist. Calling this a 'Card Game That Uses Chips Instead of Cards' game review seemed cumbersome, so I went with Chip Game.

The crazy thing is, Puzzle Strike could have been a card game. You have a bag where you throw your chips, instead of a deck where you put your cards. You draw chips from your bag, and you play the chips like cards. But where cards might have been cheaper to print or easier to categorize, chips just plain work better than cards would have. Plus they're more fun.

In fact, the chips in Puzzle Strike kind of make me want to make one of those Dominion sets where someone converted the whole game and put it on poker chips. It really would work pretty well, and get rid of all that shuffling (not that the shuffling ever really bothered me). But I'm not planning on doing that, because while I have loved Dominion for a long time now, and played it a whole bunch of times, I don't really care if I ever play it again. Puzzle Strike does just about everything Dominion does, but it's way better.

But Puzzle Strike dispenses with Dominion's tired, overused, fake-middle-ages theme and replaces it with a quirky, Japanese-style puzzle game pretending to be a fighting game. That sounds insane, and it might be, but it's far more interesting. And where Dominion suffers from a desperate lack of interaction, Puzzle Strike throws a sleeper hold on Dominion, beats it into unconsciousness, and stuffs it into a steamer trunk that it ships to Taiwan, where Dominion spends the rest of its days scrubbing toilets in a factory that makes cheap plastic dinosaur toys.

The goal of Puzzle Strike is outlast your opponents. You lose and are eliminated if you end your turn with ten or more gems in your gem pile (yes, that sounds odd, but only if you never played a Japanese puzzle game that simulates a fighting game - which I have). You automatically gain one gem every turn, but if you have the right chips, you can 'crash' your gems, splinter them into smaller gems, and send them to an opponent.

To really exploit the wacky fighting-game concept, everybody gets a character. You might be the tough stone golem with great defense, or the goofy lucky panda with high risk moves, or the volatile flame-arrow chick who can beat the pants off everyone else but who gets hurt a lot doing it. Your character is defined by three unique chips that you're going to see a lot during the game, so it's a very good idea to tailor your overall strategy to your fighter. The fox ninja girl, for example, is going to want to buy lots of special actions. The half-naked schoolgirl isn't actually in the game, so you know it's not actually a Japanese game, but there's still a good bit of inferred T&A, so the influence is still there.

Often, your turn might be pretty obvious, based on the chips you have in your hand. If you've only got one action, it's not really that tough to decide what you're going to do. But more often than not, Puzzle Strike gives you the chance to make really cool moves that leave everyone at the table saying, 'ooooh, good move!' except the guy to your left, who is going to say, 'you son of a bitch.' You have to plan your purchases and form an overall strategy for the game, but you also have to be on your toes and be creative with the chips you have available at any given time. It's genius, is what it is. It's smarter than Dominion, and considering how much I've enjoyed Dominion, that's saying an awful lot.

The place where Puzzle Strike really shines in comparison to Dominion is how much you're forced to work around the horrible things other plays do to you. Hold on to those defense chips or lean heavily on brutal attacks. Save your crashes for just the right moment or hammer away constantly. The choices are yours, but you're not playing in a vacuum. If you were playing in a vacuum, you wouldn't be able to breathe, so that's probably for the best.

I can't even begin to describe how much I've enjoyed Dominion since I started playing it. It's innovative and original, smart and just plain fun. And so when I say that I don't care if I ever play it again, because Puzzle Strike is better, I want you to understand that I'm not saying that lightly. Puzzle Strike picks up where Dominion left off and improves on the absolute brilliance to create a game that is more exciting, more intelligent, and more damned fun.

Noble Knight Games is sold out of Puzzle Strike right now, but you can still get it direct from the publisher right here:
http://www.sirlingames.com/products/puzzle-strike-2nd-printing
Posted by Matt Drake at 7:19 PM

As a fan of Super Puzzle Fighter this is a must have!
Shipping to where I live is 30dollars though :/ damn!

Thanks for the review!
I really enjoy your site.

MD
Wow. Coming from you, ranking this title above Dominion is a huge endorsement. I wonder; how well constructed are the chips? If I vomit, sneeze, and/or spill beer on them - will they survive? Will I survive? At least with Dominion, the OCD crowed can put little sleeves on the cards...

I picked this one as a Print-and-Play a while back and loved it. I am glad they put out a physical copy I can pick up from my local gaming store. Playing with chips just makes this great game better.

Yeah, this is one bad-ass fun game. I really hope there are expansions. But unlike Dominion, which gets a shot in the arm to renew interest when a new expansion comes out, Puzzle Strike has a lot more replay right out of the box. For one thing, while the central, rotating chips are important, it's also critical to buy the right combinations of chips that are in every game. You can't just buy money all the time. You can't formula your way out of this one, either - because your opponents may change their tactics, you have to respond.

Andrew, the chips are printed on really heavy chip board, similar to a high-grade punch board that you would usually see for counters or something. They have a magnificent coating on them, so they'll stay clean, but if you pour a rum & coke on them, you'll screw 'em up. And they're not going to stand up well to 100 plays, either. They're more fun than cards, but they won't last as long as a sleeved Dominion game. They will last longer than unsleeved Dominion, though.

I've always assumed that the cost of sleeved Dominion must be close to just buying Dominion twice, though that's probably just an exaggeration. My friend and I played probably 20 games this weekend. So maybe it won't stand up to a THOUSAND plays without the chips getting, well, chipped, I'm sure 100 is super low. You'll get hundreds of games out of it for sure.

We played a bunch of Dominion and a bunch of Puzzle Strike, but quite a bit more PS. And I like Dominion fine.

Can't wait for the DF review of Yomi.

I assume this is a review of the Standard Version. I purchased the Deluxe version (1st printing) and was not happy with the quality (the printing on wood was uneven and the box had some structural issues).

I think the game itself is amazing, but I'd recommend the standard version unless things have changed a lot.

WHY DID I BUY DOMINION?!?