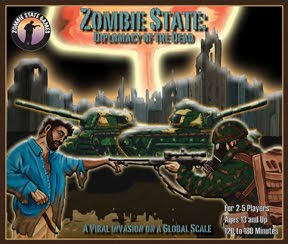 Usually, when you see a movie about zombies, it's about a handful of survivors surrounded by nothing but walking dead. You never find out what happened everywhere else. It's kind of assumed that the entire world is one gigantic wasteland of flesh-eating psychopaths, but you never really find out for sure. Usually it doesn't much matter, because the story is about a few characters, not a global event.

Which is one of the reasons Zombie State took me by surprise. In this incredible game, players assume control of different world powers as the zombie apocalypse descends and everything goes to Hell in a handbasket full of chewy meat parts. This is a pretty considerable departure from the standard rising-dead scenario, and I wasn't sure it would be as interesting.

But it turns out that trying to stem the rising tide of face-munching zombies is pretty damned fun. In fact, it's three hours of seriously tense fun that feels shorter than a lot of 45-minute games. You'll have to balance your need to control the spread of the plague against researching improvements that will eventually lead to the eradication of the undead menace. In other words, you'll have to let the zombies eat New Jersey if you want to teach your tank drivers to aim for the head. So that's not a particularly difficult decision, but what if the zombies are eating every farmer in California? No more Napa Valley, for one thing, and your surviving populace may get really tired of canned food when they can't get their mitts on fresh produce.

The thing that really struck me as I played Zombie State was how well it had been tested. There were a lot of factors to work out in order to create a balanced game that made you sweat without making it impossible to survive. But the game works out great - early on, everyone watches in horror as their cities are swarmed, their countries fall, and their resources go up in smoke. But once you get a little traction, get dug in and start fighting back, it starts to look a little better. Sure, Argentina is now populated solely by zombies and llamas, and Mexico City is one giant all-you-can-eat brain buffet, but you've managed to protect Brazil and the scientists there have finally figured out how to make zombie blow-up dolls that make all the male zombies drop everything and have rubber-girl orgies.

But no matter how well you've planned, there's still always the possibility that the zombies will pop up where you least expect them. Every turn, there's a chance that a couple infected corpses smuggle into the country on fruit trucks and start a whole new outbreak. And then your tanks will have to roll in fast, because if you let those wackos feed, before you know it, all of Buenos Aires is dining on Brains Con Carne and the whole place smells like unwashed runner's crotch.

At first I was worried Zombie State was going to be a Risk clone with walking dead, but in this game, it's not a bad idea to help out your opponents now and then. After all, the real enemy is the corpse strolling down Main Street and cracking skulls like walnuts for the gooey center. You won't invade anything, which works out, because you'll be lucky if your soldiers don't wind up being a blue plate special. You won't really have troops left over to attack your neighbors - they'll be too busy trying to keep Moscow from turning into a chow line.

As the game progresses, your research projects will begin to pay off - you'll learn how to wall off entire countries, repopulate empty lands, or inoculate your citizens against the zombie virus (they'll still die when they get eaten, mind you. They just won't stand up and eat anyone else). By the end of the game, someone will have strategic nuclear attack capability, and you'll be able to nuke the zombies in Saudi Arabia into glass. Hopefully someone manages to eradicate the zombie threat before it gets out of control, because the virus continues to mutate, and if nobody finds the cure before the disease goes airborne, the entire world is screwed like a fetish porn star.

Everyone who played Zombie State with me said that they didn't even realize three hours had passed. We had so damned much fun that we couldn't believe how much time had passed. The game is tense, balanced, exciting and challenging, and really makes you feel like you're in charge of managing a population doomed to eventual extinction. Sometimes you'll be hopeful, sometimes you'll watch in dismay as the entire population of Germany turns into zombies who will only play games about farming (the difference would be that now, after they finish a rousing game of being farmers, they eat some farmers).

Aside from the unconventional approach to a zombie apocalypse, another reason Zombie State surprised me is that visually, it looks like it should suck. I really hope that the publishers have enough success with this game to hire artists for the next one, because the illustration and visual design for this game is pure ass. There's a horrifying Photoshop filter applied to the art on the box cover that makes it look like they drew it with crayons and then glued their drawing to a balloon. The board you use to track your research progress is so crammed full of information that it looks like the org chart for a Microsoft call center. If you could arrest people for Photoshop abuse, the creators of this game would be in San Quentin right now.

But Zombie State surprised me, in a big way. Of all the games I've played that look like they were put together by a pair of junior-high potheads using Dad's laptop and a couple online tutorials, this is the best. In fact, I've played hundreds of professionally produced games that looked like a million bucks and bored me half to death, and Zombie State surpasses many games I have really enjoyed. If I rated games, it would get a big pile of stars and thumbs and even a very high number.

So embrace the unconventional theme. Ignore the criminally bad art. Zombie State is one hell of a good game, and I hope it sells like hotcakes, so that the creators get all fired up to make more.

Games this small should be ordered direct from the publisher. Check it out right here:
http://www.zombiestategames.com/ordering.html
Posted by Matt Drake at 5:29 PM

I just bought this game but haven't had a chance to try it out. It seems like I made the right choice.

I think you'll be pleased. It took me completely by surprise. I was expecting at least mediocrity, after hearing a lot of people talking about it, but I was delighted to discover a box of genius.

Not artistic genius, though. That is decidedly missing.

It's a fun game indeed, with a steep learning curve how to handle the zeds. Second game was much easier, though.

By that time artfully channeling you zeds to your neighbours becomes mandatory. It rarely backfires and it gives you an edge in final victory. Philantropy doesn't pay in this game.

It is funny that you mention the "carne" of Argentina because that is the way it works. There, everybody eats meat and it is like the staple food. I once decided to rent an apartment in buenos aires  and the real estate company advised me to get one near a restaurant where beef was sold because if not, I would have to order it by phone and they say that the steak that comes with a delivery boy is not as good as the one offered by restaurants. It was true, I am glad they gave me that advice!