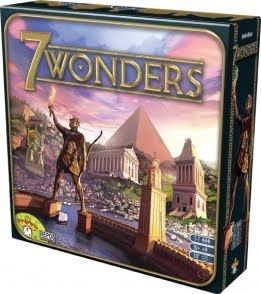 Every year, gaming websites have a ritual. I like to call it the Masturbatory We Wish We Had An Awards Ceremony ritual, though most places just call it the Game of the Year. It's like the Emmies or the Daytime Grammies or the Uncle Bob's Zippies or the Downers or Uppers or Ludes or some damned thing, except that instead of having a bunch of people show up in tuxedos and walk down red carpets, a handful of game nerds wearing Star Wars t-shirts with Cheeto stains tell the rest of us what games we should have been playing all year. Then everyone argues about it.

I read some of those lists this year. In many cases, I had not played most of the games on those lists. Being a maverick freelancer with no respect for authority (yes, that was tongue-in-cheek), I don't have access to many of the games I would really love to get, and no desire to get a bunch of the ones I end up missing. But in my opinion, not enough of those lists included 7 Wonders. I don't know if it's just because it has been so damned hard to get, or because not enough people loved it. And I don't care, really, because I don't put much stock in lists compiled by other people. I barely put any stock in lists I compile myself. Which, incidentally, makes it tricky to shop for groceries.

If I was to make a Top Games of 2010 list, however, I can tell you right now 7 Wonders would be on that list. Since I got the game about a week and a half ago, I've played half a dozen games, making it one of the most-played games I've ever received. When I really like a game, that usually means I'll play it three times before it starts gathering dust, so for me to play a game this much, I have to really love it. For the sake of reference, here are a few other games I've played a whole lot of times:

Not coincidentally, those round out the top of the list of my absolute favoritest games of all time, which is why I look for nearly any excuse to drag them out. And now, I have another game to add to that list, because 7 Wonders is ludicrously fun.

Here's a quick rundown of 7 Wonders. You start with a wonder, like the Hanging Gardens of Babylon or the Pyramids of Giza, and that basically tells you which civilization you're controlling. Then you get a hand of seven cards, choose one to play, and pass your hand to the guy next to you. You run out, then you see who has the best armies, then you do it all two more times, with progressively more impressive (and expensive) cards. There's more to the game than that, but if you came here to get a summary of the rules, let me just tell you how disappointed you are going to be. Very. That's how disappointed you'll be.

The brilliance of 7 Wonders comes from the intensely difficult decisions you will have to make in order to win. You need to decide on a strategy from the outset, and you need to tailor every decision to reinforcing that strategy. Are you going to be a nation of brilliant scientists? Will you rule the land with military power and an open disrespect for bathroom breaks? Or maybe you'll develop the arts, or become a nation of traders and merchants, or maybe you'll just get your ass kicked because you try to do too many things and wind up with the worst country in the world, and the Egyptians will stomp a mudhole in you so deep that it goes right through to China.

Every time you get a hand of cards, you're getting them from someone who can clearly see what you're trying to build. At the same time, you're passing cards to someone whose goals and capabilities are right there for you to see. So you have to decide - should you play the card you really want, or should you play one you want less to keep it away from the guy who will use it against you? Destroy it for money or bury it under your pyramid? Because the next hand of cards you get may give you exactly what you need - or it may give you a pile of used donkey crap that you don't even want, making you wish you had not just blown all your cash to kill a great card on your giant statue when you could have buried a crappy one instead.

Another awesome thing about 7 Wonders is how your first few turns have a profound effect on the rest of the game. Establish too many resource streams, and you'll waste the chance to create the building blocks of your master scheme. But build too many clay pits and stone quarries, and while you'll never have a problem building the good stuff, everyone else will have mighty armies and libraries full of brilliant works, and you'll be stuck with tin soldiers and coloring books.

But just because you build a great opening strategy does not mean that late game decisions get any easier. If anything, it gets even more difficult to decide what to develop, because the cards get more and more powerful. Too much focus on one aspect will help you pull out the stops on your fine arts district, but your neighbor is going to turn into a military juggernaut and repeatedly hand you painful beatings. Trying to control your neighbor by burning up his cards means you'll lose the chance to build the pantheon that will bring everlasting glory to your country. It's a tricky balance, and it gets trickier. And awesomer. Yes, that's awesome with an r. I don't care if it's a real word.

I've played several civilization-building games, and they always take far too long. I love a game with meat on it, but when the meat in my ass molds to fit the chair I'm in, the game is too damned long. By comparison, 7 Wonders has the elements of those historic empire games, but you can finish inside half an hour. Which means you have time to play again, which you will want to do, because 7 Wonders is a simply fantastic game.

It should not come as a surprise that 7 Wonders is as good as it is. It was designed by Antoine Bauza, who also created a little cooperative piece of genius called Ghost Stories, which is another game I've played more than five times. He also made Bakong, but I'm pretending I didn't see that. Hell, nobody gets it right every time.

With a nearly ideal combination of strategy, excruciating decisions, speed and constant tension, 7 Wonders is quite possibly about to join my top five games of all time. And I could tell you what those five games would be...

I would tell you where to find yourself a copy of 7 Wonders, but it's really hard to find right now. Once Asmodee figures out that a reprint would be a license to mint money, Noble Knight Games will have it right here:
BOOKMARK THIS FOR LATER
Posted by Matt Drake at 5:23 PM

February, they said, when I asked for a replacement card for the one faulty card in my game.

I'm surprised that the abstraction doesn't bother you. We ended up calling the cards 'greens', 'reds' etc instead of whatever theme they are supposed to have.

First time I'm writing here. I just a to say that your blog is awesome. I really like the way you write!

Interesting, I found that there are games I would rather play instead of 7 Wonders (Race ft Galaxy, Dominionn and Thunderstone to name three). Maybe I am making a mistake but the game feels pretty samey samey. I don't have the vast amounts of play you do (only 5) but it is a game my wife likes, so chances are I will keep it.

Excellent blog, keep it up. 7 Wonders hits a sweet spot with my gaming group, RftG crashed and burned. I fully agree with your review and see 7 Wonders alongside Puerto Rico, Medici and Ra as my favourite games.

We're enjoying this game immensely, and I just slapped down a few bucks to get hold of the Manneken Pis, Stevie Wonders, and Catan Island promo packs, as well as a copy of Leaders. Can't wait for the Cities expansion to come out in July 2012 :)