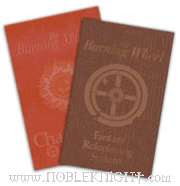 If you grew up on Dungeons & Dragons, a few factors became standard operating procedure. One, you were going to fight, get hurt a lot, and then win (unless your DM was a dick). Two, you would carry barrels of treasure back to your local inn, where you would then spend at least 45 minutes on lengthy accounting procedures and profit sharing. Three, if the princess was locked in the tower and you had to kill the lich, you could send just about anyone to get her out again. Essentially, D&D is a board game where you can do whatever you want, as long as you can figure out how to roll for it.

And if you grew up on Dungeons & Dragons, The Burning Wheel will blow your mind, because the only similarities between the two games are elves and swordplay. Everything you ever knew about dungeon crawls is out. There have been several attempts in role playing games to make players actually play some roles, but The Burning Wheel doesn't try to add character interaction to a board game. It's not about the dungeons, the monsters, or the treasure. This is a game about the people you're pretending to be.

The Burning Wheel has been around long enough that serious RPG nerds will probably have heard something about it. You may have read phrases like 'character-driven story lines' or 'story-driven game' or 'something you could clear up with some medicated cream.' But those don't really tell you anything useful, beyond being a jumble of irritating words that sound like either corporate boardroom catchprases or medical diagnoses.

To understand just how important the characters are to their own story, all you have to do is look at how you go about creating your fictional alter ego. Rather than rolling some dice and assigning some attribute points, you actually have to start with birth and chart the life of your character through a series of lifepaths. These paths can twist and turn to create a fascinating life, and as you choose your paths, your character develops almost spontaneously. You can have an end goal in mind - in fact, you really should - but you'll be adding tons of meat to your warrior knight as you take him from his spoiled noble roots, through his service in the war against the orcs, and up to his current life as a knight errant in the service of the king. You'll invent family members, associations, and maybe a hooker or two (those are optional, but I recommend them). You'll feel like you've been playing before you ever roll any dice.

Speaking of rolling dice, this is not the 'I hit him, does he hit me?' back-and-forth of most RPGs. You could face down an opponent, roll your dice one time, and within two real-time minutes, one of you is dead and one of you is cleaning the blood off his blade. You're not maneuvering around, checking initiative and making five-foot steps. You're diving in, yelling a hoarse battle cry, and swinging for the fences until the bad guy's severed jugular sprays blood all over your clean shirt. There's a more in-depth battle system for when the battle really gets messy, but The Burning Wheel is not a game about fighting. It may be a game about people who fight, but it's the people who are important, not the fight.

The most obvious indicator of how personalized these stories really are can be found in the beliefs, instincts and traits. Every character has something important to him, whether it's looking out for number one or always stopping to help old ladies cross the street. These beliefs are integral, and when the player invents these beliefs, he's telling the GM that he wants them to come into play. If your grizzled veterans believes firmly in the bond of brothers in arms, sooner or later, one of his soldier buddies is going to wind up in some hot water. If your sticky-fingered beggar has an instinct for swiping loose change, you're as much as telling the GM that you want plenty of chances to steal (and probably get caught).

What this all means is that, unlike most mainstream, commercial RPGs, The Burning Wheel does an exceptional job of putting the role playing back into role playing. You're telling a story, not killing monsters. You're growing and changing and mutating, not leveling up and rolling for more hit points. You can still have plenty of action - but players will want to be a little more careful, because the toughest brawler can be dropped by a single sucking chest wound. You know, like in real life.

I can hear the erudite uber-gamers in the back, which is crazy because you're not actually there, which means that you're just voices in my head. And those voices are saying, 'other games have done this!' And you know what? I've played those games. They tend to be self-indulgent, arrogant crap designed by douche-nozzle fruitcakes who think their bowel movements smell like Old Spice body wash. And to really embarrass those elitist assholes, The Burning Wheel does it better. Admittedly, some of the writing in The Burning Wheel smacks of 'look how cool I am', which is ironic and slightly hilarious in a role playing game, but it's not bragging if you can do it, and The Burning Wheel delivers some of the best cooperative storytelling and role playing you're likely to find.

I have a few complaints, but they're fairly minor. For one thing, the rules are really long, and you have to digest several hundred pages before you can even stab anybody. It's worth the prep time, but you'll have to read some confusing rules, and for lots of them, you'll have to read twice, because some of the ideas are very unlike all the other games you've played. And in all that reading, you'll have to occasionally listen to the author get a little preachy about the right way and the wrong way to play his game, which gets only slightly older than a well-aged sharp cheddar. Hell, I could probably write a couple paragraphs about the various problems I have with Burning Wheel, but they would be completely overshadowed by the fantastically fun time I had playing it.

The Burning Wheel is a grownup RPG. If you just want to play out some nerd-rage power fantasy with a sword as long as a Buick and underground caverns full of stock monsters, you're going to hate Burning Wheel. But if you showed up to play a smart game that twists and develops and grows on its own, with stories that only your characters could tell, The Burning Wheel should be the next game you buy.

Pros:
Create interactive stories that revolve around the characters, not the dungeons
Emphasizes the story, instead of being a tactical reenactment with a flexible ruleset
A system that creates interesting conflict
Stories about the characters, not their battles or magic armor or bestiary of slain foes
Some of the most fun I've ever had role playing

Cons:
Some confusing rules that, from time to time, get a little counter-intuitive
More than 600 pages of rules spread over two books is a bit intimidating
The author's 'voice' is a little on the irritating side
Inconsistent art looks like it was culled from a clip art collection

Noble Knight Games provided me with this review copy after some of you requested it. So you wouldn't be reading about this awesome RPG if it weren't for them, which means that if you want to buy this game, you should get it from Noble Knight:
REALLY LONG LINK
Posted by Matt Drake at 2:44 PM

Great review...I really want to try this one out.

This almost makes me want to try a role playing game again. Some of it sounds like how we would flesh out our old 1st and 2nd edition D&D characters, but I really like the idea of a character-centric RPG experience.

My group has been playing BW sonce seeing this summer at Gencon. This is not for everyone. You will immersed in a character and its development as well as all the others playing. It is best if you consult someone who plays the system already or better yet have them run it or be in the party.
Every week I leave the game seeing something different because the players have as much a part in making the world as the GM does. It is by far the best gaming experience I have ever had.

Excellent review of one of my favorite RPGs ever.

You hit all the major high points without getting bogged down in trying to explain different mechanical concepts.