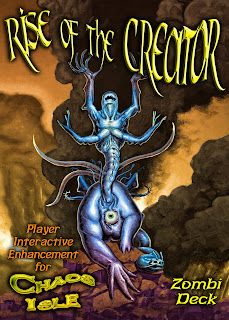 Expansions are kind of a way of life in the world of games in general. They make the fans all excited, because they add more value to the games you already enjoy. And the publishers make more money, because in addition to having a new product to sell, they also tend to inject new life into old games and drive sales of the originals. To sell more Arkham Horror, Fantasy Flight offers Dunwich Horror. To sell more Summoner Wars, Plaid Hat releases The Vanguard. And to sell more Gamma World, Wizards gives us... well, never mind, it's not a perfect model.

Small publishers know the power of expansions, too, so to get more attention for Chaos Isle (a very fun game by a very small company), RealmsMasters recently released Rise of the Creator. To read a review of the original game, you can check here. I also reviewed the expansions, which add a bunch of value to an already cool game. And to read about Rise of the Creator, well, just keep reading.

Chaos Isle is a chaotic dice-fest where you take turns revealing zombi cards and then killing them with your awesome dice-rolling skills. It's fast and bloody and fun, but there really isn't enough interaction, in my decidedly non-humble opinion. Players don't get to hose each other unless they're already dead, and in a game this nasty, I totally want to do that. That was my biggest complaint with the original game, along with the amateur-hour art.

It seems the guys at RealmsMasters follow Drake's Flames, because everything I wanted out of Chaos Isle has been added to Rise of the Creator. This 30-card expansion includes three new kinds of cards, including feats, viruses, and mutations. Plus you get a couple new monstrously evil zombis to murderize and collect their unholy corpses. So it's basically a game you can play with the third-graders in Sunday School.

My favorite cards in Rise of the Creator are the feats, which let players totally screw the other players. I would not consider playing the game without these new cards. Feats let your heroes power up zombis on your opponent's turns, make him fight more monsters, steal his cards, or just save your bacon when you're about to die. They're fantastic, but they can be hard to get, and they're not free to use, either. You have to discard the trophies you've collected, take wounds or dump your gear when you want to play them, so while they are very powerful, feats are balanced wonderfully by the expense involved in using them.

To get more feats, you have to fight mutated zombis, which only occur when they're drawn along with one of the new mutation cards. If you're fast enough, you might be able to just run away, and considering how much more deadly zombis can be with a mutation card, that might be wise. But since killing them all is the only way to get more feats, you'll find yourself diving headlong into really bad decisions against very poor odds. And that's great, because this really is a game about doing incredibly stupid things against unimaginably horrible monsters.

And just because too many people were actually able to win this game before being massacred, eaten by mutated ringworms and turning into the walking dead, we have the new virus cards. If you're playing with the feats, which could definitely make the game easier if you use them right, you also get to see how the zombi virus has mutated. Maybe there are just more bad guys to fight every turn, or maybe they run faster, or maybe they just bite really, hard. On the other hand, maybe the infection has spread to the heroes, and they get more gear, or get to attack each other. And maybe the infection has become a full-scale epidemic, in which case you have to deal with two of these nasty cards at the same time.

You only get two new zombis in Rise of the Creator, but what the new guys lack in quantity, they make up in quality. These suckers are going to be crazy hard to kill, with an exceptionally high chance of making you dead. The head bad guy's pet is called Noxx, and he looks like a cross between a dragonfly and a very sick angler fish (look 'em up, they're creepy as sin). And Rex Jarvis, the undead auto mechanic, is one mean motor scooter, especially because he can whip out a shotgun or a fireman's axe and go to town on your pathetic human.

The guys at RealmsMasters also stepped it up in the art department when they put together Rise of the Creator. The design issues I had with the original game have been completely addressed, by varying the backs of the cards and printing the card types bigger (not to mention making the cards easier to read). And where some of the art in Chaos Isle looks like it was done by a small child with a box of colored cheese doodles, everything in Rise of the Creator is pure bad-ass. The art looks seriously demented but completely professional (assuming that your professional artists are acid-tripping psychopaths with very bad dreams).

Every single thing in Rise of the Creator makes Chaos Isle a better game. The feats are fantastic fun, the mutations make you work for the feats, and the viruses add a twist that means you have even more fun ways to play this crazy game. If you haven't checked out Chaos Isle yet, now's the time. RealmsMasters is running a great special where you can save a bunch and get everything in one package, and if you already have everything else, Rise of the Creator is only twelve bucks, anyway. Break out the dice and prepare to re-kill the undead - it's time to go back to Chaos Isle.

2 to 6 players (You can play the original solo, but the whole point of this expansion is to screw your opponents. Not a good idea in a solo game.)

Cons:
Nothing comes to mind

Imagine my delight when I discovered that Noble Knight Games is carrying the entire Chaos Isle line! Or don't imagine it. If there are children present, it could be disturbing.
LINK TO NOBLE KNIGHT

And if you want to get everything at one time, you can check out the Whole Damn Thing here (just real quick - the word is 'damned'. 'Damn' is a verb. After you damn something, it becomes damned, unless you're not very good at damning. I know, nobody likes a grammar nerd.)
http://www.realmsmastersgameforge.com/thewholedamnthing.htm
Posted by Matt Drake at 8:14 PM

I couldn't agree with this review more. The game was good before and received many a good play in our home, but now it's something else entirely. I also would never play the game without this expansion. Great review!

I have to agree as well. No way I will EVER play the game without Feats! The game is far, far superior with this expansion.