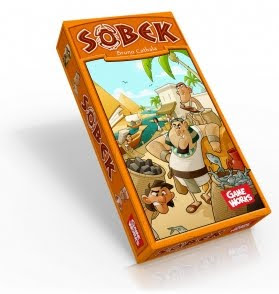 Ancient Egyptians were some downright rotten people. They would steal and kill and rob and even park in handicapped spots. When something needed building, and there were big government contracts on the line, those Egyptian bastards would sell their souls - not to mention their grandmothers - to land the fat paycheck.

I know this is true because I play games, and they're highly educational. In Sobek, all the players are competing to get rich off the impending construction of the temple to the great crocodile god (his name is Sobek. He might be a jackal or bird or something, and not an alligator at all. I'm not an historian, so I don't know, and I'm not Egyptian, so I don't care).

Egyptian people got rich by having sets of things. Like if they had three baskets of wheat, that might make them rich. Or if they had four bundles of Playpharoah Magazines - you could totally get rich off that. And the reason this made them rich was because you could only sell things if they came in a bundle. So if you saw one cow, you knew that owner was screwed - he could never get rid of it. The only way to sell it was if he could get a couple more.

Sobek does a fantastic job of representing the economy of Ancient Egypt. In this game, you score points (which represent money) by playing sets of matching cards. This is a shockingly accurate depiction of exactly how Egyptian dudes got ahead - they sold stuff, but only in bundles. Every turn, you have the option to wander through the marketplace and add a card to your hand. Hopefully that card will help you make a set, because, you know, you can only score with sets. Nobody ever sells just one pile of rocks, after all. You can only sell them if you have three piles of rocks.

In Egyptian marketplaces, goods were placed all over, and all you had to do to get one was walk up and take it. The trick was, if you didn't want the thing right in front of you, you had to stab somebody, or steal an old lady's walker, or leave the bathroom without washing your hands. In the game, this is represented by being forced to take cards as corruption points. It's pretty realistic.

Instead of taking a card (maybe you don't want those ebony logs, because maybe you're not actually making a piano), you can play a set. This is like selling it, because you can score points later. Obviously, Egyptians were masters of the credit market, because they would sell stuff to you now and then make you pay out the ass later. That's sort of how Citibank does it now, only back then, the Egyptians had a little more integrity. If you didn't pay, they would stab you and throw you in the Nile, but at least they never used auto-dialers and obnoxious assholes with minimum wage jobs and unresolved power fantasies.

Some of the cards you can get have people on them, and those people can help you out, just like they did back in the Olden Days of Egypt. Instead of taking a card or playing a set, you can play a helper. This is like when the Egyptians would make a couple phone calls, and the priest would come out and absolve them of their sins by taking their stuff. It works pretty much the same way in the game - you play the card, and then the person comes and helps you out, maybe by giving you more stuff, or taking away your corruption stuff, or by letting you use your corrupt stuff to make sets (which, as we know by now, is the only way you can sell them).

That corruption does add up. Just like in Ancient Egypt, you didn't have to be the least corrupt. You just had to avoid being the MOST corrupt. If you're the merchant with the greatest number of dead people hidden in a basement in Queens (as represented by your corruption cards), you get to be the scape goat. You lose a whole bunch of points, and everyone else whistles awkwardly as they slide quietly past. You go to jail. They send fruit baskets.

When the dust settles and the temple is built, everyone checks to see how many points they got. That tells you how rich you are. Just like today, Egyptians won if they had the most money, so the person with the most points is the winner. Along the way, that person has probably stolen goods other people wanted, stuck other players with corruption points, and made them dump all their goods into a garbage can infested with head lice. There is a very high probability that someone at the table will have, at some point in the game, told someone else that they hate them and hope they lose a limb in an industrial accident. It's good, clean fun, Egyptian style.

Egyptians also cared a lot about how their stuff looked. They spent a lot of time carving sculptures and painting pictures (though that may have been because they didn't actually have an alphabet, and were forced to write everything on the wall because it was the only place with enough room to finish a sentence). Once again, Sobek brings home the past, by giving us great art, very nice cards, and an insert tray that ties for the coolest ever made. You'll have plenty of eye candy to enjoy while you steal from the poor, kick puppies and drive 35 in a school zone.

OK, I confess. This isn't historically accurate. It's just a set collection game with a penalty for impatience. But it's simple and fun, and has plenty of chances to make your friends hate you. Most games like this are short on interaction, but Sobek is almost one continuous opportunity to screw your opponents. If you watch the cards, time your plays and make your move when it counts, you'll probably clean up. If you're impatient, vindictive or sloppy, you'll get your ass kicked. And if you hate card games with weak themes, you'll just be looking for something else to play. Not me, though - I think Sobek is a hoot, even if I think some old Egyptian guy should have been able to sell just one cow at a time.

Pros:
Great cartoony art on high-quality cards
Fast-paced and entertaining
Plan a little, scam a little, and hose your friends a bunch

Cons:
A little watery on the theme

In case you haven't been keeping up with the site (and with all the lewd humor, who can blame you), Noble Knight Games sponsors Drake's Flames by sending me games so I can tell you about them. I don't ask for handouts - I'm not a huge website with hundreds of thousands of members and expensive ads all over the place. If you want to support this site, you can shop at Noble Knight Games, who will see the value in continuing to provide me with games, so that I can keep giving you reviews. It's a giant win-win-win, which is something corporate people say so that they can steal your wallet.
LINK SO YOU CAN BUY SOBEK
Posted by Matt Drake at 6:08 PM

Good review.. i thought i was reading a history book.

you didnt mention the events.. or you did and i missed it.

the events and the "discard down to 6 cards" character give the game an extra strategy twist because they prevent card hoarding.