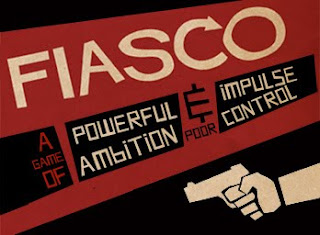 1. A referee. This is the guy who comes up with the story, creates the monsters, plays the shopkeepers, and pretends to be the king. His job sort of sucks, but he gets to know all the secrets.

2. Some rules for determining what happens when somebody gets punched in the face, or stabbed in the kidney, or stomped in the nuts. Generally, these rules involve rolling lots of dice.

3. Getting better. Your characters will get stronger, and faster, and smarter, and learn handy skills like blacksmithing and trap-making and parallel parking.

Fiasco does not have any of those things, and yet it is most certainly a roleplaying game. You'll take on a role, and you'll play it. So that's a roleplaying game. It just doesn't have a wild setting, a dungeon master, stat blocks or character advancement. You start and finish in a single session, with no setup time and no need to learn a bunch of rules. If you're not intrigued yet, then you probably found this site accidentally, when doing a search for reptilian venereal diseases.

In Fiasco, a handful of players take on the kinds of characters you might find in a Coen Brothers movie like Fargo or A Simple Plan. If you've never seen Fargo, then 1) shame on you, it's awesome, and you should see it right now, and 2) it's one of the greatest examples of how bad decisions can lead to disastrous outcomes, with characters ending up either in prison or in a wood chipper.

All you need to play Fiasco is a whole bunch of regular dice, half of them black, half of them white. In a pinch, you can use blue and red, or yellow and green, or chartreuse and beige (but those last ones would probably be kind of ugly dice). When you want to have something good happen to your character, you want white dice, and when you're hoping your character gets completely screwed, you want black dice.

Which brings me to my next point - you may very well wind up rooting for your character to be arrested, imprisoned, maimed or killed. You might be laughing hysterically as your drug-dealing extortionist is buried under eight feet of snow and shoved into a massive drift by a snowplow. Because more than any other game I have ever played in the history of playing games, Fiasco is all about the story.

Here's a short synopsis of one game we played, to give you an idea of how completely screwed up this can be. Mike was selling drugs to his boss, Derek, who also owed him a bunch of money for gambling debts. Billy Joe was also trying to supply Derek, and Derek was embezzling money from federal grants to cover his bad habits. Lisa wasn't involved in any nefarious misdeeds, but just wanted Mike to actually show up to work and do his job. By the end, Derek was in prison, Billy Joe was homeless in South America, Lisa was still an underpaid company drone, and Mike was dead. As it turns out, he was buried in a snowdrift. By a snowplow. That Lisa was driving.

The game is broken down into acts, with each player having two scenes in the first act and two in the second. You use this huge pile of dice in the middle of the table to determine whether your scenes go well for you, or if they go bad. Maybe if Lisa had been able to get Derek to reprimand Mike in the beginning, a lot of misery could have been avoided, but we gave her a black die for that scene. Derek blew her off, and it went downhill fast. Mike ended up killing a completely unrelated company contractor when Derek fed him a red herring, and Billy Joe put decidedly questionable porn on Mike's computer so that Derek could blackmail him. Billy Joe put a dead seal in Mike's bed to scare him off, but all it did was get Mike angry. Then things got worse.

With no character generation outside establishing some relationships at the outset, and no rules for resolving violence outside handing over a single die, the rules in Fiasco practically fade completely into the background. They provide a framework and guide to make sure you create the most god-awful Charlie Foxtrot that results in the maximum potential mayhem. Hilarious hijinks will ensue. People are very likely to die - or worse.

If you're playing roleplaying games for the chance to explore bizarre, fictional worlds and work out your deep-seated power fantasies, Fiasco is not for you. But if you want to see a story grow right before your eyes, and you want to take part in that story and watch it twist and gyrate like a belly-dancer's hips, then you should waste no time in getting a copy of this incredible game. I've been playing these silly games for thirty years, and Fiasco is the most fun I've ever had with a roleplaying game. It is simply amazing and pure genius. The rules are short, intuitive and easy to read, and after you try it one time, you'll be talking about the game for weeks to come.

Pros:
No referee
No stat blocks
No accounting
Pure, unadulterated awesome that you can finish inside three hours and be discussing for years

Cons:
Could spoil you - you may never want to play any other RPG

If you're not too weak in the knees, you owe it to yourself and your loved ones to pick up a copy of Fiasco. Bully Pulpit Games has the game, plus they support the crap out of it with new scenarios all over the place:
http://www.bullypulpitgames.com/games/fiasco/
Posted by Matt Drake at 6:26 PM

I finally got to play this last weekend. All I have to say is if I knew at the beginning my high school coach was going to turn out to be a post-op transgendered woman, I would have named her Jesse.

I really like the part of the review that says "People are very likely to die - or worse." I wasn't sure what the "or worse" part could be til I kept reading.

I don't typically do role playing games, or at least not for many years, but this one seems awesome. The review makes it feel like practically anyone with a twisted mind (don't we all have one?) can sit down and have fun with this.

"Which brings me to my next point - you may very well wind up rooting for your character to be arrested, imprisoned, maimed or killed."

Yes, my wife was very upset when it turned out that her character was supposed to wind up with a "good outcome," since she was leading her character to a most miserable outcome ("formaldyhide poisoning while being burned alive").

So her "good outcome" for her character wound up surviving the fire AND the poisoning, but having to have both her hands amputated...but otherwise living comfortably from the insurance money claims of her burned down funeral home and her dead grandson.

Of course, only people who've played Fiasco would understand how all that could happen...

Like Drake, I've been screwing about with RPG's over the course of the last 30 or so years (well - not so much NOW anymore as when I was a pimply-faced, angst-ridden teen, obviously, but still on occasion). And as far as game reviews go, I trust Drake implicitly. Bloke knows what he's talking about, and he's never steered me wrong yet. All the games I've gone ahead and shelled out bucks for in the last two years have been because of what I saw of them here.

Fiasco is no different, but has been - to date - the best find hands-down yet.

After reading Drake's take on the game, I poked about and read a few more. Then I just couldn't stand the anticipation anymore so I went to the publisher's web site to see how bad I had to whore myself out to get a copy pronto.

Well, you can get a nice little teaser preview of some of the rules in a free PDF, and - as Drake says - every month they publish (again in PDF and again for free) another psychotic little setting for the game.

You can get the...well..."rulebook" I suppose is what you'd call it in physical form (for all that tactile, page-turning action if you're craving such) for around $25 - or just go cheap like I did and get immediate satisfaction by getting it in PDF form for a measly $10. If you go that route, they're giving away yet another free bonus setting with it till the end of the year.

I highly recommend that you give this a try. Hell, I had a blast just creating slew after slew of twisted, myopic character relationships using the preview rules before ever shelling out for the full version.

Do yourself a favor and GET THIS GAME!

Episode 29 has the Minions of the Monster Master doing an actual play of Fiasco, the Antarctica storyline.

I and some friends played this a couple of weeks ago. It reminded me of the old Gary Gygax quote: "The secret we should never let the gamemasters know is that they don't need any rules." Fiasco takes that a step further and reveals the secret that the players don't actually need the gamemaster either.

The brilliance of Fiasco is how minimal the rules actually are. They're mostly there to explain how the characters are related, to enforce some turn taking among the players, and supply good and bad karma to their characters to give players some idea of where to take the plot. The rest is all theme and story. In fact, the whole thing strayed from RPG territory into more of a structured exercise in collective screenplay writing--and was an absolute blast in the process.

Thanks, Matt, for turning us on to this one!