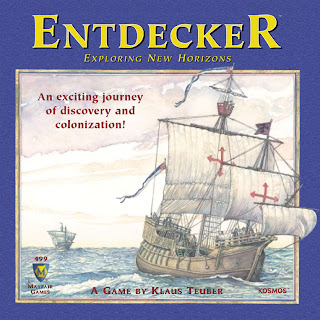 Sometimes, it's really hard for me to tell whether or not I'm going to like a game until after I play it. I mean, I try to approach every game with an open mind, but usually, I can finish reading the rules and know whether I'm going to love a game or hate it. But every now and then, a game leaves me with no idea whatsoever.

Entdecker was like that. It's a game of exploration in a fictional part of the Caribbean, which should make it pretty cool. That's a pretty sweet theme. The art is very nice, and there's even a little wooden pawn that looks vaguely like a sailing ship (it also looks vaguely resembles a sombrero, which really has nothing to do with the game, except you may find yourself saying, 'it's your turn to move the hat').

But then you read the rules, and for one thing, they're a little confusing, and for another, you do an awful lot of exploring uncharted areas and no time shooting stuff at all. Now this pretty game with the cool theme and the Mexican headgear looks like it might just be a pure, non-violent efficiency exercise, with all the fascination of the owner's manual for a 97 Skylark. Hell, it might just be Euro Tetris.

And then finally, after all that, you just knuckle down and play it, and you realize that Entdecker is a pretty damned cool game. You and your opponents take turns moving the explorer's ship and discovering island in the middle of the ocean, then claiming them and sending your scouts to hunt for wild berries and coconuts. (Really - you have to discover produce.)

At first, it can be difficult to see all the depth in Entdecker. Once you play a couple turns, though, you'll begin to see all the different paths to victory, and the way different strategies can provide different rewards, and how the island-conquering warlord might be defeated by the nickel-and-dime little guy who snags all the best shrubs, and they both might lose to the dedicated explorer who hunts down all the rare and valuable waterfalls.

OK, so you've read this far and you're thinking, 'when does this get awesome, again?' And you're right, from the description, this sounds like less excitement than the music in a department store elevator. But twist it and look at it from a different angle, and the kick-ass will shine through.

For starters, there's a ton of gambling. You can bet on the sure thing, but it'll cost you, and it might never be as rewarding as the long-shot. And there's lots of countering other players - steal their islands, steal their fruit, steal their waterfalls, and before you know it, everyone at the table is gunning for you like you Tony Soprano put a price on your head. The game also includes all kinds of planning, and strategy, and careful tactical maneuvers meant to block everyone else and get you paid. For a game about sailing in a hat and hunting up wild fruit, Entdecker has a whole hell of a lot going on.

Sadly, this review isn't going to do any more to tell you if you ought to buy Entdecker than you could get if you read the box. Euro fans might dig it, though there is a healthy amount of luck. Players of violent games might like it, because there are pirates, and there's lots of the interaction and daring risk-taking that make their favorite games so interesting. The theme might not expressly mention bloodletting, but there's no way you spend this much time sailing the Caribbean and nobody gets killed. So in a pinch, we can call it a man's game.

I like Entdecker. It's very cool. The art is pretty, the theme is exploration and discovery, and the rules practically beg you to take wild risks and hose your friends. It's enjoyable and interactive and, best of all, fun. The only question I have left is, what the hell does Entdecker mean?

Cons:
Some tweaky components decisions seem like an excuse to overcomplicate simple tasks
Doesn't look like it should be as cool as it is

Dogstar Games is carrying Entdecker, and not only can you save a bunch of money on it, the shipping is free!
http://www.dogstargames.com/product/MFG0499
Posted by Matt Drake at 4:23 PM