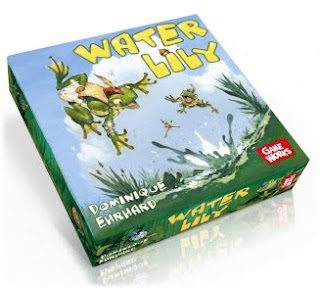 DIRECTIONS FOR READING THIS REVIEW

At the end of each paragraph, you should ask, 'What will they think of next?' Asking this question aloud is optional, but if you do actually verbalize the question, you should do it in a low mutter, possibly while shaking your head in disbelief.

In the world of board games, we've used just about anything as an excuse to make a game. Delivering the mail? Sure! Farming? Of course! Storing things? Obviously! So it should really come as no surprise when we see a game where frogs race across a pond for the right to marry the frog princesses.

(Reminder: this is where you ask, 'what will they think of next?')

In Water Lily, each player plays a team of four frogs who leap from lily pad to lily pad, bouncing off each others' heads to get extra distance. And in this race, you don't want to come in first, because you get more points for fourth place.

To add a little confusion and delight to this highly improbable race, players will not know which color frogs the other players are representing. So not only are you trying to secure fourth place with your amphibious racers, but you are actually trying to make everyone else come in first.

The frogs are on wooden discs, and they move faster or slower depending entirely on how many frogs are underneath them. It behooves you to make frog piles, not only because then the frogs in question can move faster, but because the frogs underneath are stuck until your web-footed suitor gets his fat ass off their heads.

(You get the idea. You can take it from here.)

Apparently, there's already too much information available to the players of this game. You know who you are, and you know where you are, so to make things confusing for you, the game actually hides the frogs who are winning. The box has a plastic insert with slides on it, and you put the bottom next to the top with the board covering both, and when a frog finishes the race, he slides into the darkness. So unless you have a much better memory than I do, you won't even know for sure whether you just score fourth place (big points) or fifth place (no points at all). Not only do you not know who your opponents are playing, but you don't even know who's winning! Genius!

The art that goes along with this crazy, exceptionally unlikely game is absolutely gorgeous. The frogs painted on the wooden discs are nice, but the art on the outside of the box (which you see while you play because the whole game is propped up on top of the box) is absolutely brilliant. The board with the lily pads looks like a lovely place to take a dip, if you're a frog, and the frogs on the cover are painted in the same beautiful and evocative style as the rest of the game. They even have funny little hats, because these are apparently medieval frogs.

(OK, you can stop now. Wallow in the incredulity for a while.)

With production values this high, and a game that must have cost a mint to make, it's a shame that the game isn't more fun. It works fine, I suppose, but I'll be damned if we could figure out a strategy to it. The best thing you can do for yourself is remember how many frogs are in each hidden slot, because any kind of planning is nearly worthless. Every clever plot I hatched to foil my opponents or secure my early success was an abject failure, and the one time I did well, I threw caution to the wind and just moved my frogs willy-nilly.

However, if you're looking for a game that plays well with children, boy, is this a big winner. Kids will love the colorful art and the chunky wooden pawns. And since they can put even less planning into this than they do into their next bed-wetting, they can actually have a shot at beating ol' Dad! It's not luck, exactly, because there are no dice or cards. It's more like you're completely at the mercy of everyone else at the table, and you can't possibly plan for every eventuality. Simply rushing the finish line with everything you've got is actually a viable strategy, which means just about every move will be pretty damned obvious, unless it's random and pointless.

I would also like to have a lengthy conversation with the guy who thought it was a good idea to hide the winning frogs. It's bad enough that you barely have any control over when you finish the race, but not knowing where you want to go makes this game an exercise in frustration. I don't feel like I'm doing anything meaningful, beyond providing entertainment for my children when I drop a frog into a chute and he sticks out the top, because I've apparently secured a place so far back in the race that most of the nubile girl frogs have already been married and are heading to Hawaii for their honeymoons (maybe that could be the next theme - a game for adults where you figure out how the newlywed pond-hoppers use their giant hotel beds. If someone can make Water Lily, they could make the Newlywed Frog Honeymoon game).

I can't entirely hate Water Lily, though, because my daughter loved it. It helps that she won twice, but she would have had fun even if she had lost. She liked the art and the chunky discs, and since it took her about 30 seconds to understand the rules, she was able to have fun bouncing off the other frogs and disappearing into the chutes. This game has a ton of appeal for youngsters, and while Mom and Dad may get tired of it after a couple runs, you can finish in ten minutes. So quit your whining and play a game with your kid, already.

Because the next game you play might be about ambiguously gay grasshoppers who collect seashells to make into drag queen gowns.

(It might be OK to ask it just one more time.)

Cons:
If there's a strategy to be had, we couldn't tell

Water Lily might be a rather ridiculous game for adults, but it could be a blast to play with younger kids. Noble Knight Games has it:
BUY THE GAME
Posted by Matt Drake at 2:37 PM