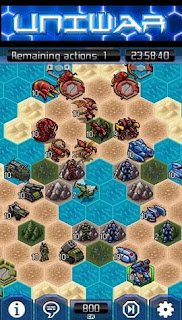 I don't review cell phone games. I have too much self-respect to review a game you play on a screen smaller than the palm of my hand, and that only costs me five bucks. Besides, the only reason you play cell phone games is because you're either waiting for the bus or killing time at a PTA meeting.

But by the same token, I've been complaining for years - since I got my first cell phone - that the games on a phone simply fail to take advantage of the format. You're on a mobile electronic device that could allow you to interact with people all over the globe, and the best you can hope to find is a crappy version of solitaire. What a disappointment! It only makes matters worse when you consider that I got a Blackberry, because I needed it for work. All the cool games are on the iPhone.

And then, like a gift from the cellular gods, there was UniWar, which has possibly the stupidest name outside Japanese-language imports and old Atari games. At first I was skeptical, but then I looked at the screenshots. And I saw hexes.

Now, some people might see hexes and think 'boring' or 'technical.' I see hexes in a video game and think 'fun'. I read a couple glowing reviews and dropped my five bucks to see what kind of cool phone game had hexes. If she could isolate the moment in time when I discovered UniWar, I think my wife would travel back and hide my Blackberry. Because I love this little phone game so much, I've checked it twice since I started writing this review.

UniWar is a turn-based, tactical, sci-fi game that pits three different races against each other in a brawl for supremacy. You have bases where you recruit your troops, and lots of different kinds of soldiers, and you take turns maneuvering across the various maps and blowing giant holes in your opponents.

I concede that I have not seen all the brilliance I could put on my phone if I had one of Apple's magic devices, but I have seen my share of cell phone games, and the one thing they tend to have in common is that they are boring to the eye. Even if the games are passable (rather than dull, stupid or gay), they're usually pretty lackluster in appearance. UniWar, by comparison, looks great. It's like eye candy on your phone. It helps that my Blackberry has a pretty big screen, though I would wager it looks even better on the Steve Jobs special.

There's a great campaign game that lets you start off with the basics, and then introduces you to all the intricacies of the various unit types and terrain. You'll have a blast learning about the flying Krahleans, the powerhouse Titans, and the versatile Sapiens. You'll probably finish the campaign in a couple days, and think you're pretty good at the game.

You will be wrong.

The best part of UniWar is the fact that it really exploits the brilliance of the cell phone game. The multiplayer game is flat-out genius. You root through a listing of available games, find someone near your own skill level (in my case, that means anyone who sucks), and choose your team. Then you play.

I'm currently playing five different games right now, though I have played as many as eight at a time. The cool thing about UniWar is you can pick games with long time limits if you're going to be busy, or short limits if you want to be staring at your phone for the next two hours. I generally choose games with twelve hours or more for my turns, so that I can sleep every now and then. And if some slack-jawed yokel can't find his way to his phone for a day and a half, you can skip his turn and go ahead with your own.

Fair warning - the guys who have been playing this game for a while are really, really good. If you happen to find yourself in a game with a player rated over 2000, he will almost certainly kick your ass like a red-headed stepchild. The odds are good that he actually is a red-headed stepchild, because adults don't have time to play games this often. Supervisors tend to frown on their employees spending eight hours crouched over their phones. So does my wife.

Should you desire a little practice, possibly to make yourself at least slightly competitive, you can also play the solo version of the game, where you choose your army, the bot army, the map and the difficulty level. This is a great chance to hone your skills, decide which armies work best on which maps, and figure out how best to defeat a phalanx of Titan plasma tanks with a team of flying bugs. The 'hard' difficulty is incredibly tough - I've beaten plenty of people at this game, but the hard bots whip me every single time, even when I pit myself against the army I think is crappy on the map where I'm sure I should be able to win.

I still don't review cell phone games. They are almost always boring, unattractive and oversimplified. But if UniWar is any indication, I may have to change my mind, and start actually asking developers for download codes so that I can review games I could have purchased for five bucks. Because UniWar is the best game I've ever played on a phone, and it beats hell out of a lot of games I've played on my computer. If you're looking for an opponent, my handle is InfinityMax. Look me up. You can probably beat me.

Pros:
Great single player game that totally rules as a multi-player game
Damned sweet graphics, phone or not
Tons of depth, lots of intense strategy, and unending chances to screw up

Cons:
It's on a phone, which is only a con if you don't want to play on your phone

Depending on your phone, there are a lot of different places to get games. You probably know them better than I do. But you can get more info about the game here:
http://www.uniwar.com/home.page
Posted by Matt Drake at 7:27 PM

The cell phone game "Uni War" is very entertaining to play. I also have the similar view that most of the Cell Phone gamers plays such types of games to pass bore time at bus stops or railway terminals. The entire review on "Phone Game Review Uni War" is nicely described for all gamers benefit. But I prefer low cost to rent or buy video games online. You deserve full marks for this review.

Well said Drake, I have an iphone and a bunch of glitzy games and Uniwar has quickly taken over as my favorite cellphone game of all time. Im usually not myself unless I have at least ten uniwar games going at a time. I think about it when i wake up in the mornings and have read the same posts on the uniwar forum multiple times already. For anyone who loves life, this game is for you