Before I kick off this review, allow me to throw out a reminder about Drake's Tales. I've had almost no stories come in so far, and I'm feeling desperately unloved. Go read about it, then send me an email and tell me a story. 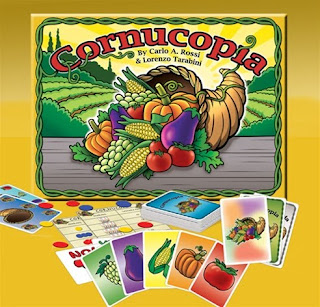 Lots of people will tell you that you're not supposed to make assumptions about a game based on the box. It's kind of like that thing about the book - you can't tell a book out of water if you make it drink, or something like that. So when you get a game with a boring drawing of a fruit basket on the cover, and graphic design that looks like it's straight out of 1975, you shouldn't just assume that it will suck. You should try it before you decide whether to burn it or toss it in a landfill.

But I'm kind of a maverick, so when I got Cornucopia, I decided from one quick glance that it was going to suck. I didn't recognize the names on the box, I didn't like the ugly yellow background colors, and I had no desire at all to play a game where you try to throw fruits and veggies into a wicker tube. The box looks dreadfully dull. It was as if the art team for the game said, 'let's try to make sure nobody wants to take this off the shelf.' If that's what they said, they succeeded. In fact, they did such a good job that I already had the game, and still wanted to put it back on the shelf.

That was before I played it. As I played Cornucopia, I realized that the bland art and unappealing theme were simply camouflage, like when Arnold covers himself in mud to hide his awesome from the alien manhunter. The artists wanted to make sure that only a few privileged gamers were able to enjoy Cornucopia, so they masked a very fun game in art so bad, you'll want to hide it behind other games in case you have company.

This isn't even a game about collecting organic produce. It's really a push-your-luck betting game. There are five baskets, and to fill one, you have to play five cards under it. These can be all the same or all different (except for the 'all the same' special basket, which decided in high school to listen to goth music and wear black lipstick, because it wanted to be different, just like everyone else). You could have taken all the rabbit food off the cards and replaced it with a rainbow of color, and the game would have been exactly the same. Except that simple colors might have actually made the game look a lot better.

Every turn, you'll try to predict how many cards it will take you to finish a basket. If you choose the 6, you'll probably make it, but the reward sucks. If you choose the 1, you'll probably fail, but if you can make it, you'll get crazy points. And once you choose, everyone else gets to place their bets on whether or not you can make it, which means that you could totally blow it and everyone else could score on your turn. After everyone places their bets, you'll turn over however many cards you declared, and if you can fill a basket, you get the pay-off. If you can't, you look like an ass and everyone else laughs and points.

In theory, this is pretty simple, but in practice, Cornucopia requires a good amount of clever thinking and calculating odds, along with a willingness to take some risks. A little luck won't hurt, either. After all, it would be kind of a lame betting game if you always knew the outcome. The actual fruit basket stuff is almost an afterthought - you're betting on whether you can fill a basket, and your friends are betting on whether you'll succeed, but nobody actually cares about the fruit. It's less picnic, more Vegas.

Every time you successfully fill a basket, you'll get a card with the number you chose. At the end of the game, these cards can be combined to add a few bonus points. If you get three in a row, you'll get a few more points, but if you can score four of a kind, you'll rake 'em in. Then you can kiss a showgirl and get your suite comped, but only if you're in a casino. I don't know where you game, but at my games, we're a little short on leggy dancers.

Once you get the hang of it, Cornucopia moves pretty fast. It may take a couple turns to really hit your stride, but once everyone understands it, this is a little like betting at a roulette table (though possibly less exciting, and as I mentioned, there are probably fewer half-naked hotties). It's downright enjoyable, and a fun little game.

It's just a shame it's so damned ugly.

If you're blind, or just not as narrow-minded as I am, you can get Cornucopia at the Eagle Games site:
http://www.eaglegames.net/ProductDetails.asp?ProductCode=GRY00231
Posted by Matt Drake at 12:30 AM