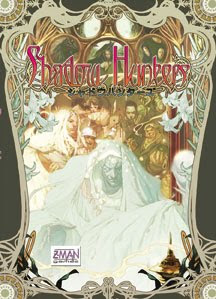 Many of you may have played Werewolf, that old high-school party game where nobody knows who is the bad guy and who is the good guy and you have to try to kill the other team before you get discovered and eaten. If you have, you probably know it's about as relevant for an adult as Duck Duck Goose. There's nothing that says 'grown-up party' like sitting around a table with your eyes closed and then making wild, uninformed accusations about everyone around you.

Shadow Hunters is a little like Werewolf, but fortunately, it's way less gay. Not that you have to man it up very much to make it less gay than Werewolf - for anyone old enough to have children, Werewolf is like Ricky Martin and Adam Lambert doing a George Michael cover. Shadow Hunters has players concealing their identities and trying to kill each other without always knowing if the person they're attacking is actually on their side or not. That's also a lot like Bang!, but Shadow Hunters is better than that game, too.

In fact, Shadow Hunters is just plain fun, period. Players each get a card that tells them who they are, including a special power and whether they are shadows, hunters or neutral. The shadows want to wipe out the hunters, and the hunters want to return the favor. The neutrals tend to have fairly different winning conditions, from being alive at the end of the game to killing a whole lot of other people.

Each turn, you'll roll some dice that tell you where you move (but not Candyland style - there are only six different spaces, and you bounce around between them). Each space has a different action, but possibly the most important action is drawing a green card. These are important for two reasons - first, they let you work in the United States, and second, they let you try to figure out who the other players are pretending to be. You hand the green card (also known as a hermit card, but I call them green cards because, well, they're green, and plus they let me make that lame 'work in the States' joke) to one of the other players, and they have to follow the instructions. For instance, the card might tell you that if you're a hunter or neutral, you heal one wound - so if you do heal a wound, the person who gave you that card knows you're not a monster.

This would be a pretty quick little game, except for one important shadow card - the Unknown. The special ability on this card lets you lie. Since you don't know what shadow cards are in the game, there's always a chance that one of the other players is allowed to lie, which means that it can be a while before you know for absolute sure who you want to kill and who you want to heal.

There's more to the game than just naming names, though. You'll pick up weapons, shields, talismans and other gear. You'll deal out special attacks at your enemies (or, with alarming frequency, your friends). You'll have the chance to attack other players, but only if they're close to you, which means sometimes you'll want to pass, because it totally sucks to kill someone and then find out they were your only ally.

As the game comes close to ending, you'll probably have a pretty good idea who you want to kill, but you won't always be able to attack them. In fact, you may end up having to damage your allies whether you like it or not, because some of the cards (especially the black ones) are downright nasty. The tension mounts, the air gets thick with bluff and intrigue, and it might all come down to which players did the best job of preparing themselves. It might also come down to the dice, but that element of luck just adds to the suspense. I know that turns off a lot of people, but honestly, if you can't enjoy Shadow Hunters because there's luck in it, then you may have been born without a fun gland.

The side of the box says you can play Shadow Hunters with four people, but that should only be attempted if you're very bored and your house recently burned down, consuming every other game you own. Five players is a blast, but the more you have, the better the game. Get eight players, and it will be a cutthroat free-for-all that never slows down.

If you're going to have a party, and you're going to play games, you should absolutely include Shadow Hunters in the lineup. It's a great game for a big group, it's easy as hell to learn, and despite being a raucous brawl-fest, there's still plenty of chances to be smart and make good plays. Unless your idea of a good gaming experience stops at bland European worker-placement games, you'll find Shadow Hunters to be fast, fun and a lot less gay than Werewolf.

Right now, Dogstar Games is listing the Shadow Hunters expansion, but not the actual game. I can't explain that. Once they fix it, I'll send you right over there to buy it. Because you totally should, because it's awesome.
Posted by Matt Drake at 7:39 PM

Thanks man! I agree 100% with this review. I'd been waiting for a while for you to write it. Personally, I found playing neutrals to be more fun since the victory conditions are more varied for them.

I gotta say, I'm surprised you didn't mention the art at all, you know, you being a salacious geezer and all.

Forgot, the box cover kind of sucks IMO and does the game a disservice. I do like the edge art, but the rest is hard to figure out.

Z-Man games is quickly becoming one of my favorite companies, them and Asmodee.

Alright, I've been a lover of these reviews for a long - and I mean a long (soul-destroyingly long) time, but have so far resisted commenting.

But for posterity, this has to be be recorded as the the greatest phrase ever: "...possibly the most important action is drawing a green card. These are important for two reasons - first, they let you work in the United States..."

I wept a little at the awesome.

These games that require human interaction confuse and baffle me.

Is it likely in a big group that one player will be outed or killed early in the game and then have a bunch of downtime while the other players finish? Nothing like seeing 7 of your friends having a great time after you get killed in the first 5 minutes.

It sounds cool and I need a game for a large group but that issue comes up in Bang (and maybe Werewolf not that I ever played that, uh never.... I'm not gay.)