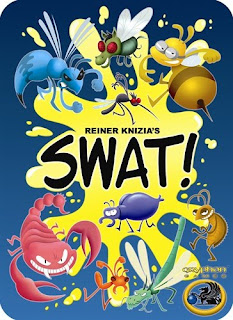 You know, it has been too long since I beat the hell out of a crappy game. Plus I had a very bad day. I think it's time I reviewed Swat. The game actually has an exclamation mark after the title, but that irritates me, so I'm leaving it off out of sheer disrespect.

Swat sucks. I kind of wish that was all I needed to write, and then people would just go, 'yeah, that makes sense,' and not buy it. But a little justification is probably required to make this a review, and not just me saying mean things about Reiner Knizia again.

This stinker of a game has a bunch of cards with wacky cartoon bugs and numbers. One player (we'll call him 'lucky' because he's not actually playing right now) turns cards face-up one at a time. The other players watch nervously, waiting for the perfect chance to slap the table and claim all the cards turned up so far. Then the slapper becomes the lucky player, and he deals cards while the other players watch with baited breath and decide whether they should slap the table.

The reason this is actually a game and not just something people do when they're drunk is because the different cards combine with other different cards to create different scoring combos. Some of the cards have negative numbers, and those hurt your score. You score more for having more of some particular bug, and there are other crazy cards like bug zappers and cards that cost you points if you don't have enough. So while you're watching this growing pile of cards being doled out by the dealer (or 'lucky'), you have to do math in your head and try to remember what you already claimed. So it's like light-speed memory, but more frustrating.

There is some tension to be had in Swat, if all the players are under six. These anxious tykes might be sitting around the table asking themselves such questions as:

"Have I picked up two bees or one?"
"Did Little Billy get more Swat or Not cards?"
"Will the next card be good or bad?"
"Did I pee my pants again?"
"I like you. Do you like me? Check yes or no."

Sadly, when played by adults with an IQ over 35, there is no tension, just a handful of grownups sitting around a table and frequently slapping it hard enough to spill their beers. In this unfortunate case, Swat is not only frustrating, it is boring, unless someone pours beer on the cards and everyone can laugh.

Now, I grant you that if you play this game with children, you might have a distracting enough time to forget that you missed out on that big promotion and some asshole dinged your door in the parking garage. This distraction will mostly be caused by the sheer joy of seeing children at play, which does not actually exist, and is mostly what adults tell themselves is happening so that they can pretend they like spending time around arguing brats who don't know how to wash their buttholes. This is why Daddy drinks.

The rules of Swat actually say you're supposed to run through the deck, count up your scores, and then do it all two more times. This is three more times than your average adult is going to want to play this game. If you have anything better to do, like scrubbing the bathtub grout or cleaning the garbage disposal, you should do it instead. You may not have as much fun, but think of how shiny your bathroom will be.

It was no surprise to me to see Reiner Knizia's name on Swat. There is a bunch of unnecessarily complicated math, a theme that could be replaced by colored dots, and rules where you do exactly one thing. That would have Reiner's name all over it, even if it didn't have Reiner's name all over it. I swear the man has made some games I like, but I sure do keep the finding ones that blow goats.

So to sum up, don't buy Swat. If someone else buys it, don't play it. You will have more fun swatting actual bugs, and as an added bonus, you won't have to put up with the moths in your light fixtures.

Pros:
Comes in a metal tin, which you could empty and then put things in it like gum and matches

For something more interesting than Splat, here is a picture of a dead bug.
http://www.chrisspagnuolo.com/images/dead_bug2.jpg
Posted by Matt Drake at 7:57 PM

Reiner Knizia needs to stop putting out every dumb idea he has as a board/card game. Instead of putting out 5 dumb games a year, he should do just one good one. More Tigris & Euphrates, less Swat.

Good review. Ra, Ingenious and Blue Moon City are his only games worth playing. The rest of his games are light on theme and boring math exercises. How do his games keep getting published and who is buying them?

If you drink the beer quicker there will be nothing to spill.
Simply drain your glass as soon as anything is poured into it.

Best review I've read in awhile. It's even worth an exclamation mark!