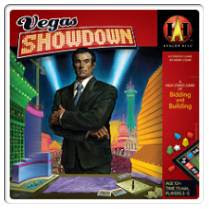 I always wanted to own a hotel in Vegas. It would be totally awesome. The back rooms would be for rent, but you would have to be in some sort of organized crime to use them. The top two floors would be reserved solely for people who were hiring hookers. And every slot machine - and I mean every single one - would be rigged to never pay out more than a dollar at a time. I would be rich, at least until the gambling commission, the FBI or the vice squad took me down. Or, more likely, I would run the place into the ground, people would quit coming to my hotel, and it would end up a disgusting, run-down, flea-bag hotel that had to charge by the hour, and instead of high-class prostitutes and classy crooks, I would be overrun by crack whores and old ladies camping in front of the slots and chain-smoking for ten hours at a time.

Fortunately, I don't run a hotel of any kind. But when I play Vegas Showdown, I can pretend. I can build my Vegas empire, competing with everyone else to be the most famous developer on the strip. I can compete for contractors, build high-end gambling facilities, and with a little imagination, I can pretend that the Night Club is a nudie bar, and maybe the girls can be incentivized to provide a little extra entertainment, so I can work in hookers some damned way.

Each player has a mat representing his hotel (since I tend to play this game with my wife and daughter, there may also be girls, so technically, I should say 'his or her' hotel, but how awkward is that? Damn the English language for not having a gender-neutral singular pronoun. And no, I do not pretend to be running whores out of the back room when I'm playing with my daughter). The object of the game is to have the most fame, which you do by building an impressive hotel-slash-casino. Each turn, you'll have the opportunity to bid on various rooms that you can add to your hotel, and then you'll place them on your mat like a giant, static game of Tetris, trying to win fame by filling in your casino and hotel areas, connecting the one area to the other, and creating clever arrangements of room tiles.

The bidding can get hardcore in a hurry. At the start, you'll want slots to build up your income, but you'll also need restaurants to get more people into the hotel. But the other players need those places, too, and so bidding wars can happen right from the start. Each room has a different thing it adds to your hotel - nice lounge acts can get you some fame, especially if you can get Wayne Newton (you can't really get Wayne Newton, and frankly, I don't think anyone likes Wayne Newton except for people who can qualify for AARP). Theaters can bring in huge fame, and if you can get some quasi-homosexual tiger tamer to take a bite wound to the head, you'll be all over the papers for years (you also cannot get Siegfried and Roy - this is all make-believe).

Even if you can't afford to buy anything, maybe because you just blew all your cash on the Space Age Sports Book (which may or may not be run by Bugsy Siegel, who you ALSO cannot get in this game), you can always spend your turn working publicity. This will get you a little bit of fame, but most importantly, you can save your cash for a turn when you really need it. Timing your publicity stints is critical, because you could wind up with a ton of money when everyone else just bought up expensive rooms and then score a great deal because nobody else can outbid you. But then, that break could also mean you wind up getting a great deal on a buffet right after everyone else just bought up amazing restaurants run by Gordon Ramsay (who you can't get, but by now you knew that).

Toward the end of the game, the really awesome rooms start to be come available, like the five-star steakhouse and the dragon room. Then the bidding gets seriously cutthroat, and planning at this end stage is key to pulling out a win. You can come from way, way behind just by grabbing up a couple important rooms at this point, so it's sometimes worth biding your time until you can break out and really kick some hotel ass (I don't think hotels actually have asses, but my hotel would probably smell like it did).

Vegas Showdown has a whole heck of a lot going for it. You've got smart bidding and careful timing. You've got physical planning and difficult placement decisions. You've got money management. You do not have Elvis, but since he smells worse by now than my hotel would, you're probably better off, and you can make do with impersonators anyway. And even though the game includes neither hookers nor the mafia, it's still an amazing amount of fun.

Vegas Showdown is out of print, but there are still plenty of copies around for you to buy. You'll be glad you did - Avalon Hill made a small handful of really good games before Wizards of the Coast killed them off to afford more D&D books, and Vegas Showdown was one of them.

Pros:
Learn it in five minutes
Plays very fast
A lovely combination of cutthroat bidding and tile placement planning
You're never completely out unless you're really, really dumb

Cons:
No hookers, mafia or Elvis

Check it out - Dogstar Games has Vegas Showdown! And by way of reminder for anyone who hasn't been here in a while, Dogstar Games provides Drake's Flames with a whole hell of a lot of games, and without them, I would be stuck reviewing thirty different versions of Monopoly. If you like reading Drake's Flames, I would consider it a personal favor if you would buy your games from Dogstar. You can get Vegas Showdown right here:
http://www.dogstargames.com/product/573-8283341
Posted by Matt Drake at 7:39 PM

This is a very much slept-on game - a flavorful bid'n'build Euro that got ignored because its box looks like casino-Monopoly.

Nicely described review on "Board Game Review - Vegas Showdown". Read the entire article of your blog. You have arranged all the blog data very nicely through well made paragraphs. I would prefer to call you video game blog master. Wishing more video game reviews from you on good games to rent for xbox 360. Wishing you best of luck for successful blogging carrier..