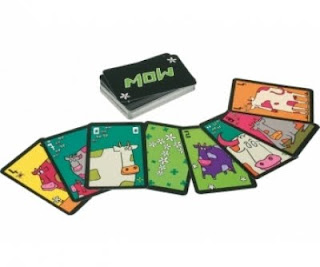 If you were to ask me what my favorite kinds of games are, I would have to start with the dungeon crawl. Anything where a bunch of heavily-armed heroes tromp through narrow corridors doing violence and burglary is going to wind up near the top of my playlist. After the dungeon crawl is what the Fortress Ameritrash guys call 'Dudes on a Map', which is one of those games with a bunch of different places, and you put figures all over the board (or wooden cubes, or plastic markers, or used condom wrappers) and roll a bunch of dice to fight over the different spots.
Continuing down the list, we might get to the involved card game, or the clever bidding game, or the cool dexterity game. We would have to continue down the list for quite a while before we get to games where you collect cows and try not to get flies. That's never going to be the kind of game that gets my heart racing.
Apparently, however, it makes a fairly fun game, as evidenced by Mow (a game whose name sounds like it should have something in common with either lawn maintenance or, extremely tangentially, that guy from Slingblade who says, 'I like them french fried potaters'). This simple little card game with a really silly theme turns out to be a casually entertaining good time for people who don't want to make their brains sweat.
To play the game, each player gets four cards. These cards all have cows on them, and maybe some flies (OK, probably some flies. Cows draw flies. It might be the fact that they can't use the bathroom). These cards also have numbers on them, from 0 to 16, and when you play, you have to go over the highest card or under the lowest. If you can't play, you have to take all the cows - and so you get all their flies, too. You may want to invest in some screen doors.
There are also a few special cards that you can play when you shouldn't be able to play, like the acrobatic cow that stands on another cow, or the sleepy cow that slides in between a couple others. When you play one of these, you can change the direction of play, which means that if you think you just played the last card that can be played and you really want to hose the person who just played, you can put on a wicked grin and say, 'your turn.' That's especially crappy because the special cows come with five flies. Apparently being special also means being stinky.
The game ends when someone gets 100 flies. This can take four or five trips through the deck, and so if you get hosed for one round and wind up taking most of the flying pests, you have another chance to get back in the game.
This is a simply game, but it's not particularly deep or interesting. It's light and fun, but it's not hard to get totally screwed and not have a whole hell of a lot you can do about it. To be perfectly honest, I didn't like it, but my family thought it was really fun. It comes down to what you want in a game - if you want an easy, breezy card game that you can pick up and play in half an hour, Mow might be a good fit, but if you want a mental challenge, keep walking. This is not the game you're looking for.
So Mow isn't my favorite kind of game. It's not even close to the top of the list. But if I were to really tell you what kinds of games are my favorites, it would have to be anything my family will play with me, and on that count, Mow is a big winner.
Summary
Pros:
Easy peesy to learn and play
Enough strategy to reward a smart player, but can still be enjoyed by dopey kids
Cute cows
Cons:
Shallow as a puddle of warm cow piss
Collecting cows is a dumb theme
Dogstar Games doesn't have Mow right now, but they might at some point. If they get it in, I'll tell you.
Posted by Matt Drake at 8:30 PM

From your description, it recalls a lot "Uno", with just less rules...

At least you won't have "look something up" ...ever.